Elvis and The Mob Connection 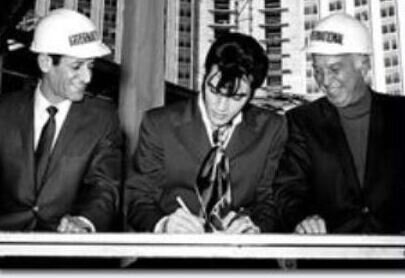 Elvis and The Mob Connection

In the photo Elvis, Alex Shoofey and Colonel Tom Parker signing a contract at The International Hotel

In watching Baz Luhrmann’s Elvis I was struck by the subtle associations to the mob.

While on Beale Street he bought clothes from the Lansky Brothers who were related to Meyer Lansky the crime boss from their father Sam.

Kirk Kerkorian was one of the biggest names in Las Vegas history owned The International Hotel that Elvis was contracted too. Kerkorian navigated the Mob-infested waters of Las Vegas. Kerkorian however had dealings with Charles (the Blade) Tourine, a convicted bootlegger. Tourine, was a reputed Mafia leader in Philadelphia and South Jersey. Besides owning the International Hotels in Las Vegas and also acquired 2.2 million shares of MGM stock. Kerkorian hired Barbra Streisand and Elvis Presley for the resort’s grand opening, Elvis let Streisand open, and followed her with 58 consecutive performances. Elvis re-launched his career in Las Vegas, and continued to perform at the International until 1976, living in the penthouse suite during his stays in Las Vegas.

Alex Shoofey was hired by Kirk Kerkorian to oversee construction and staff for the new International Resort Hotel. For the grand opening of the International Hotel, Alex met with Colonel Parker to secure Elvis’s comeback tour. The terms of the contract committed Elvis to a four-week engagement, with two shows a night, seven days a week. No other entertainer had committed to such a punishing routine. Alex also secured contracts for the International Hotel with Barbra Streisand, The Beatles, Tom Jones, Glenn Campbell and Ann Margret. Alex retired from the International Hotel in 1972.

It is Alex Shoofey who is “Meyer Kohn,” played by Anthony Phelan