Embrace, the Ugly Dolls Have Never Been So Adorable 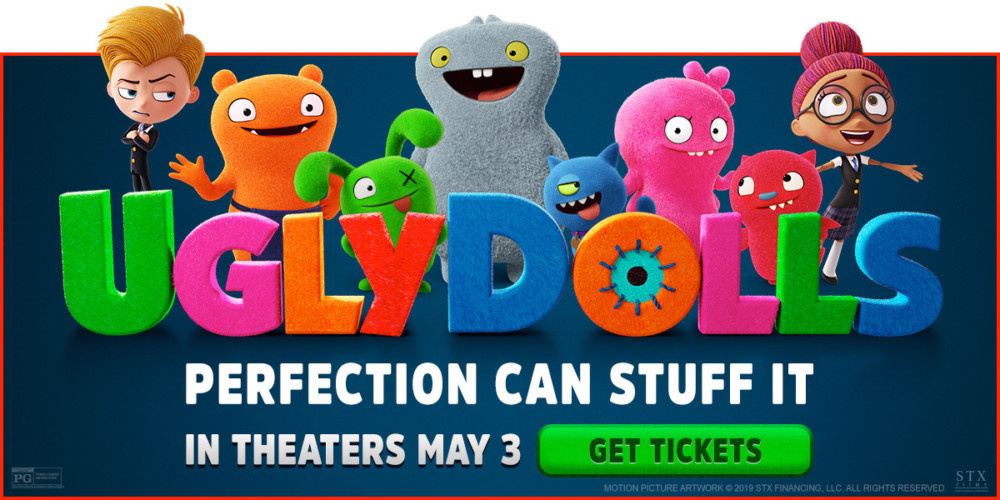 Embrace, the Ugly Dolls Have Never Been So Adorable

When the Mamarazzi invited me to see “UglyDolls,” it wasn’t really my thing, so I thought. I agreed to attend because when I worked at the Javitts in 2001, these dolls came out and were instantly insanely popular. Now these fuzzy-felt factory rejects, sing, dance, are utterly adorable and have a huge message to share. Voiced by some of the biggest names in the industry and I expect this flick to become a huge sensation. What’s even more important is parents will like this as much as there kids, despite the cute factor.

Did you know there is a hidden universe, where dolls that are deformed get thrown into the remote town called Uglyville. In this town everyone is happy and at peace except idealistic and optimistic doll named Moxy (Kelly Clarkson), who dreams of the ‘Big World’ and getting chosen to be with a child, despite the fact that Uglyville’s Mayor Ox (Blake Shelton), a rabbit who is green and has an X where one eye should be, keeps on telling her that it is a myth. When Lucky Bat (Wang Leehom) as Lucky Bat, the town wiseman sends her to the hole where new Ugly Dolls are dropped off Moxy drags her friends to see if it leads to the Big World. Joining her is Ugly Dog (Pitbull) a cyclops canine, Wage (Wanda Sykes), a vampiresq chef and strong, soft-spoken Babo (Gabriel Iglesias ).

Going through the tunnel, Moxy and her friends end up at the Institute for Perfection where human-like dolls go through a series of tests, called the Gauntlet, to be with their perfect child. The institute leader, is a suave yet superficial perfect doll named Lou (Nick Jonas). Here perfect is the only standard and Lou instantly hates the Ugly Dolls. He sends a perfect doll named Mandy (Janelle Monáe), who has hidden her poor eyesight, not to be labelled as ‘imperfect’.

The Ugly Dolls’ first day of training for the Gauntlet ends up disastrous as Lou sends out Spy Girls (Bebe Rexha, Charli XCX and Lizzo), a trio of ruthless female perfect dolls, to kidnap Ox and make him confess that he and Lou use to be friends. Moxy, completely demoralized, decides to abandon her quest for the Big World and return to Uglyville.

Back at Uglyville, every Ugly Doll has fallen into a depression, especially Moxy until Mandy visits her and convinces her that it doesn’t matter what Lou says about her or any other Ugly Doll. There is a child for every Doll.

In the end the Ugly Dolls and the Perfect Dolls make peace and merge their hometowns and Moxy gets her dream fulfilled.

“UglyDolls,” is touching, heartfelt and feels real despite the animation. This is the first animated feature produced by STX’s Family division, and the director, Kelly Asbury, who use to direct the Smurf films. It is Asbury’s direction and the book by Robert Rodriguez, screenplay by Alison Peck that really cement this into a winning flick.

The vocal performances are catchy pop kiddie radio hits starting with Clarkson’s life enforcing anthems. Shelton lends his sad drawl, as Pitbull shows off his street savvy. Janelle Monáe captures the inner conflict of nice girls who don’t want to be mean and why they are. The messages of this film says everybody is beautiful and deserves to be loved. Aren’t those messages we all need to hear?

This is a must see movie for those with a heart.

Suzanna BowlingJanuary 28, 2023
Read More
Scroll for more
Tap
Pond Picks – How to Keep Your Aquatic Ecosystem Thriving
A Guide to Prepare Your Car for Summer