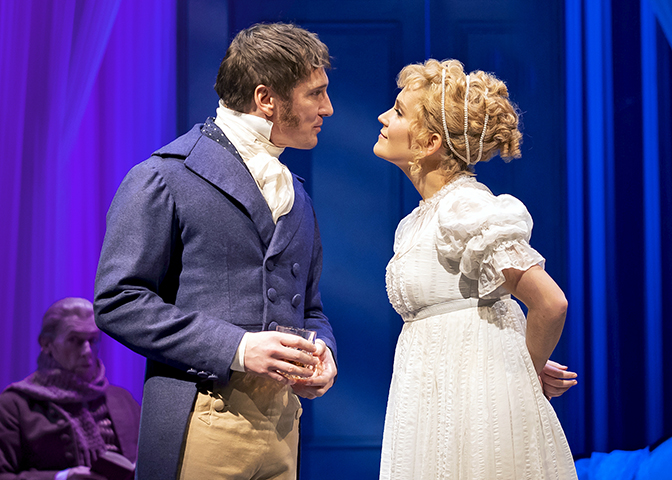 Jane Austen’s beloved novel, Emma, has been the subject of many a dramatic adaptation since its publication in 1815, and a few musical ones. But none I’ve seen is as utterly enchanting as Emma, the new musical adaptation by composer, lyricist and librettist Paul Gordon now onstage at the Chicago Shakespeare Theatre on Navy Pier.

Emma tells the story of Emma Woodhouse, a spoiled and well-to-do young woman in the fictional English country hamlet of Highbury. When she decides to play matchmaker to the other single young people around her, she misjudges nearly everyone, with alternately heart tugging and hysterical results.

By viewing the modes and manners of Georgian–Regency England through the distorted lens of her heroine’s uniquely unperceptive point of view, Ms. Austen wrote a decidedly modern novel. In this musical, as in the novel, we also see the story through Emma’s skewed perspective.

Mr. Gordon expertly balances smart dialogue with artfully crafted lyrics set in fine melodies.  Because music transcends all barriers of time and language emotionally, Emma the musical builds a happy bridge to a modern audience, while remaining true to the period style and language of the source material.

Most “new” musicals are road tested for years in readings, workshops, festival productions, and developmental regional productions, before they are picked up for a major production. But only perhaps one out of a hundred get that opportunity. Since regional theaters are often afraid to do shows that haven’t been vetted first by a successful Broadway run, many promising new shows simply disappear before they can reach their potential audiences.

On top of that, the terrible economics of commercial musical theater producing mean that any musical with more than a handful of characters can’t afford to be done off Broadway.  So unless it is on a Broadway commercial track, a big, period show like Emma gets stuck with nowhere to showcase itself except a festival of new musicals. But with the recent demise of the New York Musical Festival, new musicals are left with only the limited festival of the National Alliance of Musical Theater Producers (NAMT), and the rising Chicago Musical Theatre Festival.

Fortunately for the Chicago Shakespeare Theatre audiences, Mr. Gordon and his wonderful show have been the beneficiary of both an unusually lucky set of circumstances and the support of CST Creative Producer, Rick Boynton. Mr. Boynton discovered Emma as a judge for the New York Musical Festival. Emma received a subsequent production at Theatreworks in Palo Alto, California, which Mr. Boynton also saw.

After that, he urged CST Artistic Director Barbara Gaines to acquire the rights to do a production in Chicago.  But a commercial producer was attached at the time who didn’t want to launch the show there.  So they went to Mr. Gordon and got permission to do his musical adaptation of another Jane Austen novel, Sense and Sensibility, instead. That was such a big hit for CST that it made them want to do more musicals and continue their relationship with Mr. Gordon. When the commercial producer dropped out, the way was cleared for CST to do Emma as well.

Lora Lee Gayer is absolutely delightful as the good hearted but self-absorbed and wrong headed Emma.  Even at Emma’s most annoying moments, you want to give her a big hug.

The voice of reason trying to counterbalance Emma’s folly is Mr. Darcy, played with equal measures of righteousness logic and empathy by dashing Brad Stanley.  When Darcy has to admit to himself that he has actually fallen for the worst possible romantic choice, that is Emma herself, he sings a glorious ballad in her praise which he lets soar both musically and emotionally.

Emma’s not-too-bright, pet matchmaking project, Harriet Smith, is played with delicious obtuseness by Ephie Aardema. As the reverend Mr. Elton, Dennis William James is a geeky delight until Emma’s plans to match him with Ms. Smith go awry. Mr. Elton’s eventual wife is a hysterically funny Bri Sudia, who twists her tongue into a pretzel trying to sound upper class. The talented young woman Emma sees as her rival, Jane Fairfax, and Frank Churchill, the dashing son of her neighbors who comes for an unexpected visit, are finely embodied by Erica Stephan and Devin DeSantis, respectively. Ian Geers, in the smallish role of good hearted but doltish neighbor Robert Martin, spins comic gold out of his hayseed character. Michael Milligan as Mr. Weston and Kelli Harrington as Mrs. Weston are a perfectly mated couple. Veteran talent Larry Yando doesn’t get to do nearly enough as Emma’s father, Mr. Woodhouse. But true to his talented form, he lands every joke he is given.

CST never does anything which isn’t entertaining and tasteful.  But under the sure and tasteful hand of Artistic Director Barbara Gaines, they have really created the perfect entertainment with this production. It remains true to the period style, but feels completely contemporary on an emotional level. Although the CST mainstage is pretty big, it feels intimate at every moment, thanks to the unforced performances and the assistance of the theater’s superbly designed and operated sound system, which lets the actors lay back but be heard perfectly at every level of performance.

Musical Director Roberta Duchak brings her great sensitivity as both a performer and a musician to her conducting of the fine orchestra, and the beautifully modulated vocal performances of her entire cast.

Period perfect costumes by Marian Verheyen, diaphanous scenery by Scott Davis, lighting by Donald Holder, and the always perfect period hair by wigmaster Rick Jarvey wrap these fabulous performers into a visually delightful package.   Choreography by Jane Lanier integrated perfectly.  Credit Casting Director Bob Mason for assembling a company in which there is not a weak performance.

Under Barbara Gaines’s expert direction, there is not a false emotion, or a missed comedic opportunity. The entire production simply sparkles under her artistic leadership.

I’m happy to learn that, as a result largely of their success working with Mr. Gordon, the CST artistic team now will include musicals in their core mission, to help engage their audiences with the timelessness of these great human stories.

Mr. Gordon is also a principal in the website Streaming Musicals, where you can see a film style, mid century modern production of Emma online as well. But there’s nothing like being there live and in person to share in Emma’s hopes, follies, and eventual triumph.

So don’t miss being there at Chicago Shakespeare Theatre, where Emma plays now through March 12.