To hear how wonderful this score is, we found a earlier version that is sure to delight you and make you want to see this whole show. Streaming Musicals (streamingmusicals.com) is launching its debut production on Thursday, October 3.*  Creating a new paradigm in the making of musicals, Streaming Musicals is taking the ever-increasing expense of live theatre and revolutionizing it into a new model for producers and artists alike. By capturing shows on a soundstage or a theatrical stage and streaming them globally – for the equivalent price of a double latte – the viewer can have a remarkably accurate experience of watching a live musical while artists have a global platform to share their work. 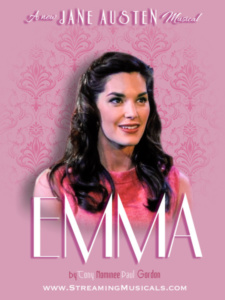 Streaming Musicals first production is Emma, with book, music and lyrics by Paul Gordon (Tony®Award nominee – Jane Eyre, Daddy Long Legs). Based on Jane Austen’s classic novel about youthful confidence and misconstrued romance, this musical has been given a mid-century modern aesthetic at the Westside Theatre where it was filmed this past spring.  Working in tandem are theatrical directors Kent Nicholson for the stage and Tim Kashani for film.  Together they keep the theatrical intention of Paul Gordon’s musical in-tact while enhancing the material by the intimacy of film. This is truly theatre caught on film.

“Emma is the first musical ever built to be streamed worldwide,” said Paul Gordon.  “And the fact that we will be able to share it with you – wherever you are in the world – is absolutely thrilling to me. “

* “Opening Night” for Emma is October 3, 2018 – in the meantime you can pre-register to win one of 20 free stream views that will give you free access to view Emma on opening night, or you can pre-purchase Emma and watch it an any time thereafter. Further information on the giveaway can be found at theatrenerds.com and you can watch the theatrical trailer at streamingmusicals.com. No purchase is necessary to enter the giveaway and it is void where prohibited or restricted by law.

Emma, a timeless love story from one of the most widely read writers of all time, is a musical that will entice modern audiences to fall in love again with one of Jane Austen’s most adored characters. Paul Gordon’s critically acclaimed stage adaptation keeps the beautiful language of Austen intact.

Streaming Musicals is made up of a group of Artists who want to make it easier for you to watch musicals and plays. We capture the magic of theatre on film and bring it directly to all of your devices. We focus on storytelling, character, and music and we do it because we love theatre and want to share it with the world. And by watching on Streaming Musicals, you are actually supporting the artists who are creating the shows you’re watching with our revolutionary new profit-sharing model. No subscriptions. Just click and watch. Support theatre and theatre artists and watch their shows anywhere because now theatre is everywhere.