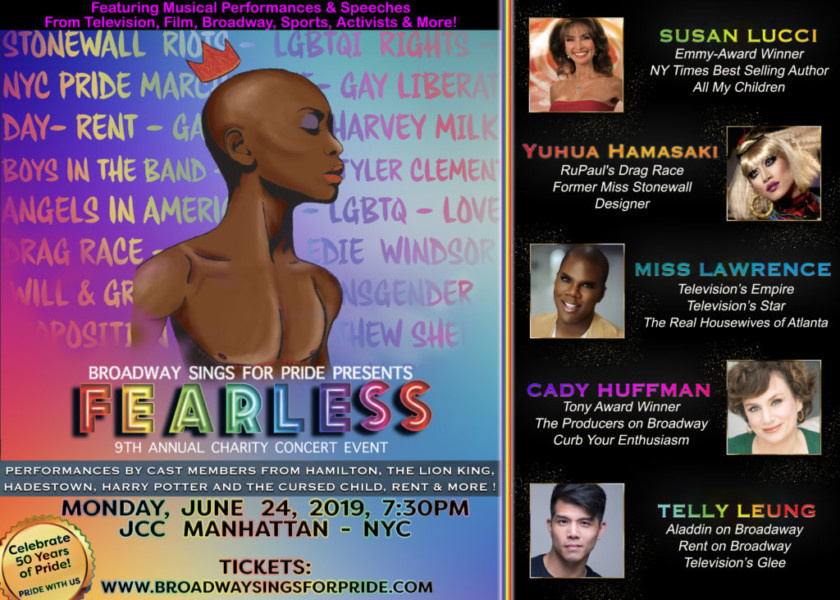 Come see how Broadway does Pride!  Emmy award-winner Susan Lucci will join a bevy of performers from stage, screen and sports to celebrate LGBTQIA Pride, commemorating the 50th Anniversary of the Stonewall Rebellion!  The night will include appearances by Tony Winner Cady Huffman, Broadway favorite Telly Leung, RuPaul’s Drag Race’s Yuhua Hamasaki and more to kickoff PRIDE Week in New York City!  On Monday, June 24, 2019, award-winning non-profit  Broadway Sings for Pride will premiere their 9th annual Pride charity concert event.  Entitled Fearless, the two hour concert will take place at The JCC Manhattan, beginning at 7:30 PM.  Journey with Broadway Sings for Pride as they celebrate a half century of Pride! The night will include a retrospective of Pride from the last 50 years, as told by some of your favorite pop and Broadway songs, celebrities, Broadway performances, and special guest speakers.  The funds raised on this very special evening will go to worthy LGBTQIA organizations in the New York City area. For those who can’t attend, for the second year in a row, the event will be live streaming in 4k resolution (live streaming information will be made available at a later date).

The concert on Monday, June 24, 2019, will start at 7:30pm at the Goldman- Sonnenfeldt Family Auditorium, Marlene Meyerson JCC Manhattan, 334 Amsterdam Avenue, New York, NY 10023.  Tickets can be purchased at www.BroadwaySingsForPride.com or https://tinyurl.com/PrideFearless

Neal Bennington will produce the event with Charles Santoro serving as musical director, arranger and pianist. He will be joined by David Cinquegrana on guitar, Joe Mankin on bass guitar and John Ferrari on percussion.  Asaf Blasberg will serve as technical live stream director, along with Robert Miele as lead camera operator and John DeMarco camera assistant. Makeup services will be provided by: Amy Sue Nahhas, Emma Berley, Geneva Fong, & Danielle Lampo.

Launched in June 2011, Broadway Sings for Pride grew out of the tragic suicides which plague the gay community. We have received support from Neil Patrick Harris, Channing Tatum, Fran Drescher, Carol Channing, Frankie Grande, Bryan Cranston, Kathy Griffin, LeAnn Rimes, Bernadette Peters, Nathan Lane, Joy Behar, Wendy Williams and many others. Broadway Sings for Pride stages concerts and events that bring to light the challenges faced in the LGBTQ community, using the funds raised from these programs to aid LGBTQ youth and their families either directly or through supporting like-minded service organizations. We have been honored by Wagner College (Citizen Alum Award 2015 Honoree), Long Island Gay and Lesbian Film Festival’s 2015 Non-Profit Organization All-Star Award, Tyler Clementi Foundation The Upstander Legacy Honoree Host Committee Member, and a four-time nominee for “Most Valuable Campaign” & “Most Valuable Organizer” from the New Organizing Institute.  Find out more on Instagram (Broadway Sings for Pride), Facebook (Broadway Sings for Pride) or on our website: www.BroadwaySingsForPride.com.