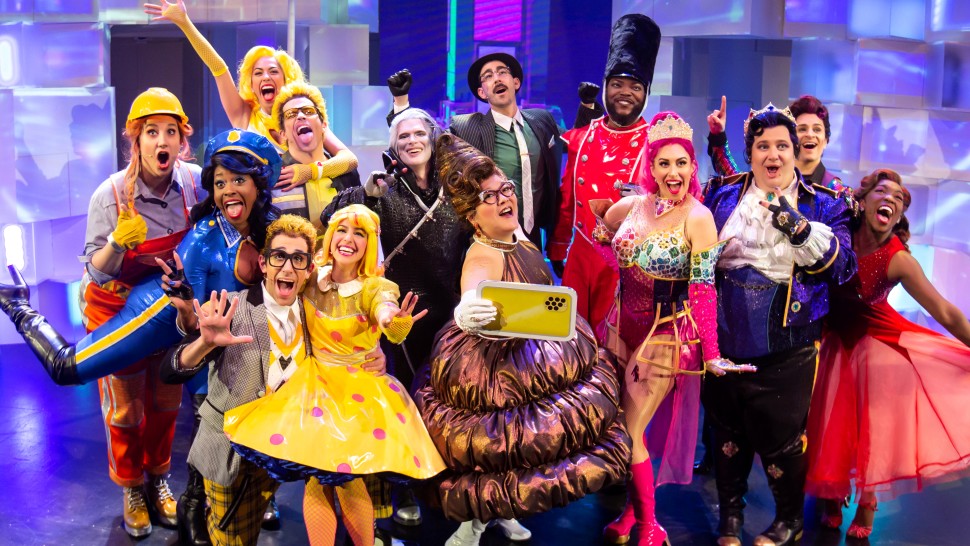 Emojiland, is a new musical written by Keith and Laura Nicole Harrison, that takes place inside a smartphone. Each of the inhabitants are dealing with their own personal crisis since the phones updates haven’t been giving back much. In “It’s Just So Great To Be Alive,” we are introduced to most of the emoji’s including Smiling Face with Smiling Eyes (“Smize” for short) (Laura Schein), who wishes to be deeper than she is and her narcissistic boyfriend whom she has been with since 1.0 Smiling Face with Sunglasses (Sunny) (Jacob Dickey).

At the castle there is Princess (Lesli Margherita) and her Guardsman (Dwelvan David). She declares the “Princess is a Bitch.” In Lime green fishnets, hot pink clip-in extensions, metallic acrylic nails and a flat, nasal voice that makes her seem more valley girl, declares everyone who questions her power are “dick-tator haters” as she jump splits to a standing ovation.

When the 5.0 update happens, Princess gets a flamboyant, over the top campy Prince (Josh Lamon). A new emoji, Nerd Face (George Abud) falls head over heals with “Smize” and gets used by a depressed Skull (the fabulous Lucas Steele) who wants to be deleted.

The Princess fearing more change thanks to Man in Business Suit Levitating (Max Crumm), decides to build a Firewall. She enlists Lady Construction Worker (Natalie Weiss), who resists and is betrayed by her lover Police Officer (Felicia Boswell), who sides with the satis quo.

When “Smize” learns her boyfriend has been fooling around with her best friend Kissy Face (Heather Makalani) since 3.0, she is cheered up by Pile of Poo (Ann Harada). Toilet humor abounds.

As a virus threatens this town of one dimensional feelings, that are more than they seem, death has the cop singing to her girlfriend “1,000 Words,” as she evaporates.

Like all good musicals death and calamity are averted, at least for today by using the Factory Reset button, which brings back all the dead emoji’s and wipes the memory of all, returning them to a state of smiling happiness.

This cast its uber talented and each have moments to shine. I had forgotten how amazing Lucus Steele is. Of course Leslie Margherita will blow your mind as will Ann Harada, but this entire cast is supreme.

The direction by Thomas Caruso and choreography by Kenny Ingram are high octane, layered and really fun.

The scenic design by David Goldstein, lighting by Jamie Roderick and projections by Lisa Renkle and Possible are out of this world. But it is the fantastic, imaginative, delightful costumes and make-up by Vanessa Leuck and the hair and wigs by Bobbie Zlotnik that will have your cheering. These are truly spectacular.

Where Emojiland doesn’t work for me is in the music Keith and Laura Nicole Harrison have constructed. None of these songs seem completed or do I see being sung outside a theatre. What I do see is this show being a cult hit musical and extending.

Suzanna BowlingJuly 28, 2022
Read More
Scroll for more
Tap
Forbidden Broadway: The Next Generation Is Back Taking Over the York With Musical Theatre Magic
Disney’s The Little Mermaid Splashes into The Argyle Theatre