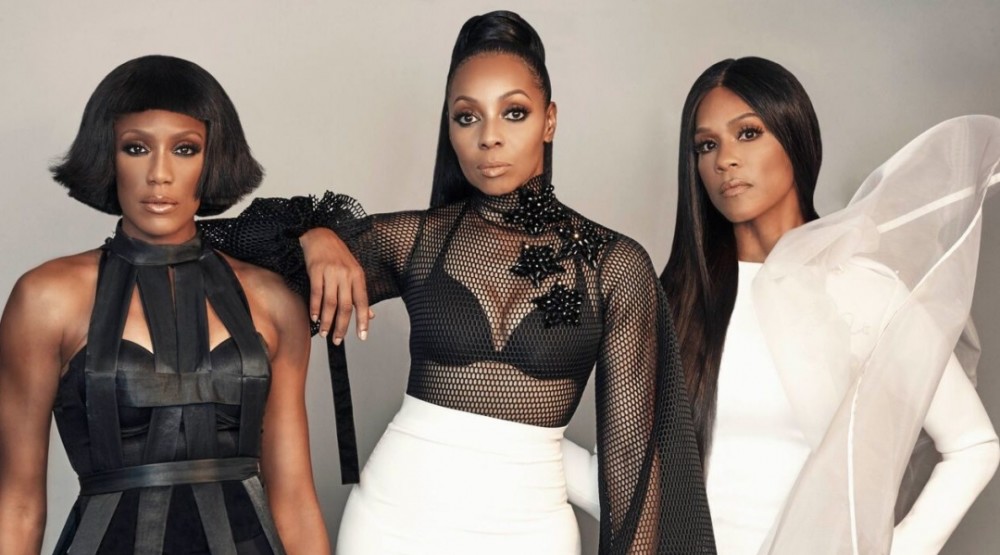 Legendary, for 30 years and counting, En Vogue is not letting up now. Still riding high off the global release of 2018’s Electric Café, their first album in 14 years, En Vogue is literally soaring as Terry Ellis, Cindy Herron-Braggs and Rhona Bennett take the group to even greater heights. Tomorrow night at Town Hall at 8pm the group will celebrate Pride.

Formed in 1989 in the Bay Area, En Vogue, comprised then of Ellis, Herron, Dawn Robinson and Maxine Jones, began their official takeover in 1990 with their hit single, “Hold On” from their critically-acclaimed debut album, Born To Sing, which reached number one on both the dance and R&B/Hip-Hop charts. Since then, they have sold over 20 million physical albums. More impressively, they have transitioned effortlessly into the digital age, garnering over 30 million streams and 26 million plus YouTube views for their Top 6 hit singles alone, which, in addition to “Hold On,” includes “Free Your Mind,” “Never Gonna Get It,” “Giving Him Something He Can Feel,” “Don’t Let Go” and “Whatta Man” (feat. Salt N Pepa).

Today the evolution of En Vogue, now a trio with Bennett, whose pre-group highlights include her childhood stint alongside future musical powerhouses Christina Aguilera, Justin Timberlake and Britney Spears on the Disney Channel’s The All-New Mickey Mouse Club, is still thriving. Ellis credits the transition to “respecting the fact that we’re all individuals and respecting everyone’s decision to do and be and have what they want and what they choose.”

As for the group’s longevity, Ellis points to “gratitude” as the key. “It’s just appreciating the opportunity,” she says. “It’s really been a blessing and I think it would be a shame to take it for granted and walk away from it.”

Doubling down on their En Vogue legacy has yielded tremendous fruit. “Rocket,” their Ne-Yo-penned, Curtis “Sauce” Wilson-produced, lead radio single from Electric Café, which blends the group’s signature harmonies with a futuristic language for romance, became their first Top 10 single in 20 years. To date, the video, playing up the intergalactic love vibe, has nearly 2 million YouTube views.

Their second single, “Reach 4 Me,” a catchy song instructing a lover how to keep the relationship alive, hit the Top 20. The album itself on En Vogue Records, the label formed by Herron and Ellis in 2016 and distributed by eOne Music, reached the Top 20 on Billboard’s independent album chart.

Wisely, the critically acclaimed album builds on all that makes En Vogue great—killer vocals infused with class. Thirty years later, the ladies remain the epitome of beauty and grace, proving that women can not only top and control the game on their own terms long-term, but look incredible and fashionable while doing so. As for keeping their pristine vocals and their bodies fit to maintain their signature high-energy, crowd-pleasing performance standard, the divas credit a largely plant-based diet and vigorous workout routines.

Keeping their sound fresh hasn’t been hard for the trio. “We were just looking for a vibe,” says Herron of their first studio album since 2004. “In the beginning, we were feeling that electronic dance sound, but then the music started to evolve creatively.” Barrett chimes in that “we love the authenticity of hip-hop and the fusion of old school rhythm with a contemporary sound.”

The result has been stunning. In addition to “Rocket,” other standouts include “I’m Good,” written and produced by Raphael Saadiq, as well as “Déjà vu” and “Blue Skies” from the group’s original production duo, Denzil Foster and Thomas McElroy and “Have a Seat” featuring Snoop Dogg. Not only sonically pleasing, the album overflows with key messaging about women’s empowerment, self-love and healthy relationships.

Constantly touring, Ellis says “There has never been a time when we didn’t have a show on the books.” At the top of 2018, the trio treated their European fans with shows in Ireland, the United Kingdom, Holland and Germany. In the United States, they stay on the road and in our ears, as their music is heard in such films as Captain Marvel and What Men Want as well as such TV shows as Pose and 9-1-1. En Vogue also hopes to add more acting to their credits, which includes their own 2014 Lifetime film, An En Vogue Christmas.

During their time off, the ladies enjoy spending time with loved ones, which for Herron includes a husband and four kids. They also give back with The HollyRod Foundation, which provides medical, physical, and emotional support to families living with autism and individuals battling Parkinson’s disease, as well as non-profit organizations that rescue victims from human trafficking and provide them with educational and job training, topping their philanthropic efforts.

Change may be inevitable, but some things remain magically the same. Three decades later, En Vogue continues to set a high standard for women in music. Their crowns remain intact. In a fickle industry, they have not only been able to “hold on,” but they’ve ascended to their “legendary” status on their own terms.