Encores Big River Musically Glorious As It Speaks To Our Past

Encores Big River Musically Glorious As It Speaks To Our Past 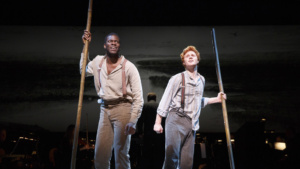 This is the statement that greets you at the beginning of the show. I originally saw Big River in 1985. The controversial aspects such as the N-word, the racial prejudice, the treatment of Jim and the other slaves barely phased me, but that was an era in which things weren’t taken so seriously. I am so glad that the Encore production has not gone politically correct and rewritten history, because the uncomfortableness I felt now, is why this needs to stay. If we don’t remember history then we are doomed to repeat it.

Encores’s version of this bluegrass, country, pop and gospel score by Roger Miller (“King of the Road”), is magnificently played by it’s onstage ten-piece orchestra conducted by Rob Berman and sung brilliantly by it’s cast. I absolutely loved John Foley on harmonica and Martha McDonnell on fiddle. The second act overture allow for orchestra members to shine.

The original book was tedious and in a word boring. I skipped the 1993 Broadway revival by Deaf West, just because of this. Rocco Landesman, one of the show’s original producers, has provided a streamlined concert adaptation of William Hauptman’s book, that allows the show to ebb and flow. Director Lear deBessonet and choreographer Josh Rhodes have kept the staging streamlined and energetic, yet with plenty of wonderful dance numbers to satisfy. The cast is off book, so it is more like a fully staged Broadway show. Allen Moyer shows how keeping it simple is more effective with his set design of movable wooden platforms. Even Jess Goldstein’s costumes are perfectly era appropriate. 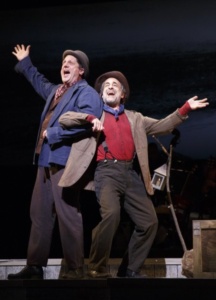 When Huck runs away he meets another runaway, Miss Watson slave Jim (Kyle Scatliffe, Les Misérables). Mr. Scatliffe brings a layer that is a quietly powerful portrayal of a man who wants to trust, but is always being betrayed. The two team up and after a spell they meet The Duke (Christopher Sieber) and The King (David Pittu), the traveling con artists. These men represent the worst in humanity black or white. They also try and steal the show with their humorous song and dance antics and monologues that are hilarious. The book succeeds, when showing us our failures and how corrupt we all are. Who steals the show is Katherine A. Guy, with her vocal gymnastics on“How Blest We Are.” Patrice Covington on ‘The Crossing” and Adrianna Hicks “Waiting for The Light to Shine,” also vocally shimmer. Lauren Worsham (A Gentleman’s Guide to Love and Murder) has a moment as Mary Jane Wilkes, but here it is the black ensemble, especially the women who are given the songs that vibrate and make you take notice. The acting for the most part is left to the white folks. 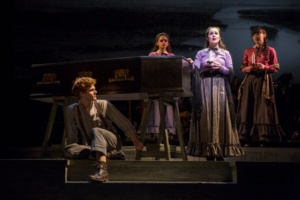 Mr. Hauptman’s book is weak in a lot of areas, but Miller’s score is lush and worth listening to. The Encore production is Broadway worthy, but that would never happen in this climate, despite the fact it shows a great deal of where we have come from. “I see the same stars through my window/That you see through yours/But we’re worlds apart.”
You call still catch this majestic production until Sunday.
Big River: Encores; City Center, 131 W. 55th St.
Related ItemsAdrianna HicksAnnie Goldenbig riverCass MorganChristopher SieberDavid PittuEncores!Katherine A. GuyKyle ScatliffeLauren WorshamNewNicholas BaraschOrange is the New BlackPatrice CovingtonRoger MillerWayne Duval
Events