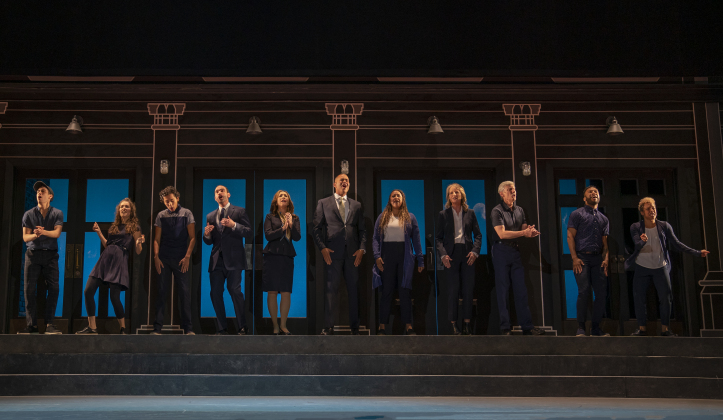 Encores! Off-Center always sparkles up the summer months with fun and wild experiements, and I’m happy to say this summer is no exception.  I was lucky enough to see the first production, just before jetting off on my summer vacation.  My plan was to write about it on my plane ride, but it was such a mitigated disaster, due to a thunderstorm that was barely anything, that sleep was the only response to finally getting on my way. So here, from the summer shores of Portugal’s Atlantic Ocean coastline, I’d like to report, days after it closed, that Artistic Director Anne Kauffman chose well for the Encores! Off-Center first production of the summer. Nina Fasso and Stephen Schwartz’s Working: A Musical floated in an a lovely little dream.  It seemed joyful and endearing, and as directed with wise authority by Kauffman with music direction by Alvin Hough, Jr. and choreography by Avihai Haham the show sparkled with talent and nobility.

I had never really heard of the show, but the more I talked about it with other wiser and more knowledgable musical theatre folks, the more I realized I had missed a slice of musical theater history. Based on the best-selling Studs Terkel book of the same name, Working: A Musical, with the contributions of songwriters; Craig Carnelia, Micki Grant, Mary Rodgers and Susan Birkenhead, James Taylor, and Lin-Manuel Miranda (who composed two new songs added to recent productions), brings to the front and center the unsung heroes of America, the simple worker striding forward into the future with resilience and hope. With a strong cast of actors; Drama Desk winner Andrea Burns (Broadway’s On Your Feet!), the engaging and sweet faced Mateo Ferro (Broadway’s In the Heights), the captivating David Garrison (Broadway’s Titanic),the strong storyteller Helen Hunt (TV’s”Mad About You“), the powerhouse Christopher Jackson (Broadway’s Hamilton), the enticing Javier Muñoz (Broadway’s In The Heights), and the national treasure Tracie Thoms (Broadway’s Falsettos), we are given a glimpse into the life of the hardworking waitress to the worn out millworker, each with their own iconic song to sing. The musical numbers, each one a gem, exudes dignity, and a strong sense of purpose shared. It’s a “living, breathing testament to the people who make this country run”, and after seeing the show and its construct, I totally get why its celebrated within the musical theatre community, especially those who studied the art. Each number is a jewel of characterization, and the roles encompass a fascinatingly wide web of people, places, and things, giving a chance for each cast member to shine bright, like they all did here at the Off-Center production. Celebrating their 75th Anniversary, the wise maestros of the evening even found a way to honor those City Center employees who help bring us in from the streets to our seats nightly, incorporating their stories inside the solid structure of Working: A Musical.  It’s a beautifully done salute to the working person, especially to the employees of City Center. We are thankful, every night, as we take in all the gloriousness that Encores! has to offer.

Directed and choreographed by Will Davis, with music direction by James Moore, Road Show tells the somewhat true story of the Mizner brothers who inherit a small fortune at the turn of the 20th Century and set out to grab their piece of the American Dream in a country where anything seems possible. The production will star Chuck Cooper (Papa Mizner), Raúl Esparza (Wilson Mizner), Jin Ha (Hollis Bessemer), Mary Beth Peil (Mama Mizner), and Brandon Uranowitz (Addison Mizner).