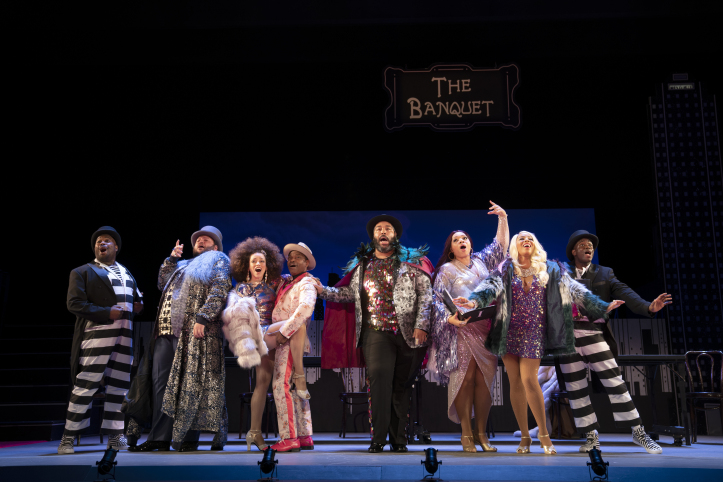 I was told by my theatre companion that Maria Irene Fornes, the intrepid writer of the book and lyrics for the musical Promenade, shuffled two piles of cards; location and characters, to formulate this story. She then, using the top two cards as signifiers of each scene, one by one me, sliced and diced together a jagged and jaunty musical without a stitch of linear structure involving. This abstraction is a perfect symbol of the wild Off Off Broadway days of the 1960’s in New York City, and a thrilling concept to hold tight when trying to make sense of the non-sequential scenarios presented. It’s a compelling moment of brave theatrical history drenched in artists of all sorts playing with cards from an assortment of artistic decks, and a delicious reminder as we try to digest the avant-garde meal set before us in the second entry of this year’s Encores! Off-Center series at New York City Center.

This construct puts Promenade all in focus. From the first promenading and parading moment of this joyously delivered musical,  it’s clear that absurdism is King of the stage, and that stance plans to squash the authoritarian theatrical structure of the day, embodied in the wickedly deliciousness of the Jailer, wonderfully played with vaudevillian charm by Mark Bedard (Primary Stages’ Pride and Prejudice). The twinsy breaker of rules, namely the two escaped convicts simply referred to as ‘105’, wonderfully portrayed by James T. Lane (Broadway’s King Kong), and ‘106’, equally matched by Kent Overshown (Memphistour), easily rule the stage vocally and with wise silly personality, mugging forward in this bizarre piece of musical theater. Joining this comical black and white prison striped duo in their uptown exploration is the wonderful Bryonha Marie Parham (Broadway’s Prince of Broadway) as the Servant, a part originated by the illustrious Madeline Kahn. You can feel her operatic joviality in the part’s wide eyed essence, circa History of the World, Part 2, as the Servant bounces along for this wildly played card game.

The piece is frustrating, with it’s manic energy and non-sensical detours through the upper crust of New York. The musical numbers, as presented by the Encores! orchestra, lead by musical director Greg Jarrett (Broadway’s Side Show) and the sublime music coordination by Seymour Red Press (Broadway’s King Lear) gorgeously fill our ears with quickly deliciousness. Al Carmines’s mix of musical styles for the score, ranging from big-band and operatic, to vaudevillian, is magnificently magnified, beautifully matching the play’s collage-like aesthetic, reminding me of the equally weird but stronger framed The Visit. The hole is dug and the cards are dealt, setting us off to the races with the two escapees, bumbling and bouncing through the landscape that has no logic attached.  From here on, the show plays its cards with erratic foresight and blindness, with bored staff looking over the foolishness of the rich in much the same way we are, wondering where this is all going. It really makes no sense, as the ‘story that is not a story’ unfolds like a demented tarot card reader. The ideals of a linear arch of development and investigation into the ‘have’ and ‘have nots’ have to be set aside, and each moment has to be tasted as a separate appetizer with no main course in sight or on the menu. It makes for a long dragging evening, I must admit, but not from a lack of talent or musical abilities in the cast and crew.

The party of ‘ haves’, namely ‘Mr. R.’ played by Eddie Cooper (CSC’s The Cradle Will Rock), ‘Miss I.’ portrayed by Carmen Ruby Floyd (Broadway’s After Midnight), ‘Mr. S.’ played by J.D. Webster (Encores’ Cabin in the Sky), ‘Mr. T.’ portrayed by Daniel Everidge (Minetta Lane’s Falling), ‘Miss O.’ portrayed by Soara-Joye Ross (CSC’s Carmen Jones), and ‘Miss U.’ played by Marcy Harriell (Broadway’s In the Heights), deliver the goods with aplomb.  Steven Routman (Encores’ Hey, Look Me Over) and Don Darryl Rivera (Broadway’s Aladdin) throw in many a fun assists along the road in numerous parts and postures, with lots of madcap running around, slapstick happy with delight. But it is the women, who are given the musical spotlight to shine to the heavens. “Oh joy, joy, joy” is all one can say from moment to moment as they wrap us around their thoughtful demented stories with ease and a dastardly hook, even when “money has made them dumb“, they remain seriously funny and formidable in voice and style.

“I’m not a morsel, I’m a feast” sings the wonderfully vivacious Bonnie Milligan (Broadway’s Head Over Heels) as Miss Cake stealing the thunder from them all, and just like the moments given to Saundra Santiago (Broadway’s Nine) as Mother, and Becca Blackwell (NYTW’s Hurricane Diane) as Mayor, each flavor and bite is a jumbled exquisite delight. With strong and eclectic choreography by Hope Boykin (Alvin Ailey’s r-Evolution, Dream), the eccentrically costumed cast, courtesy of the delightfully detailed work of Clint Ramos (Broadway’s Burn This), saunter with a style that perfectly fits the demented landscape of scenic designer Donyale Werle (Broadway’s In Transit), with strong lighting by Mark Barton (LCT’s Admissions) and solid sound design by Leon Rothenberg (Broadway’s Hillary & Clinton). It’s joyful but fractured, never fully gelling together into anything substantial. As directed with a whimsical sense of fun by Laurie Woolery (Pubic Works Director), Promenade doesn’t doesn’t quite add up to a whole lot. It struggles to keep us engaged and not looking at our watches for the 110 minute one act musical, but as a series of deliciously rendered side dishes, the taste buds are satisfied and the individual flavors rendered with perfect pitch and humor, gleefully performed to wild applause, even when the random cards dealt don’t give you a winning hand overall.

Next up (and this is one I’m super excited about):

Directed and choreographed by Will Davis, with music direction by James Moore, Road Show tells the somewhat true story of the Mizner brothers who inherit a small fortune at the turn of the 20th Century and set out to grab their piece of the American Dream in a country where anything seems possible. The production will star Chuck Cooper (Papa Mizner), Raúl Esparza (Wilson Mizner), Jin Ha (Hollis Bessemer), Mary Beth Peil (Mama Mizner), and Brandon Uranowitz (Addison Mizner).