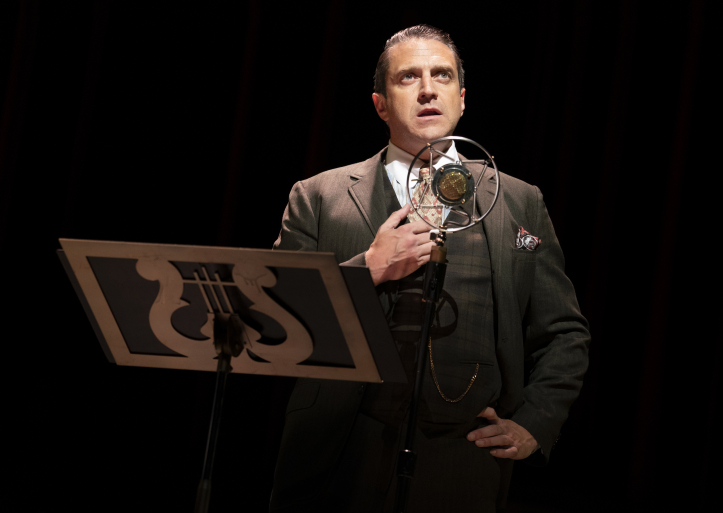 Surprising us with their simple charming entrance before ducking back behind the curtain with a wink and a grin, the revival of Stephen Sondheim’s complex but exhilaratingly fun musical, Road Show rolls into town to take over the Encores! stage after playing Off-Broadway at the Public Theater in 2008 (after an earlier version, named Bounce, produced by the Goodman Theatre, Chicago, 2003, and before that, it was named Wise Guys and also Gold!). With music and lyrics by the wise and golden Stephen Sondheim (Follies, Sweeney Todd, Merrily We Roll Along), the piece has bounced around looking for a place to call home since that first workshop in 1999. It has toured the road like any good new musical hoping to find just the right stage to land upon, and with that complicated and overly detailed book by John Weidman (Pacific Overtures, Assassins) and spectacular orchestrations by Jonathan Tunick (Encores’ A Chorus Line), it slides into place at the New York City Center within the Encores! Off-Center program. Possibly without finding the perfect fit, it sings strong, and as directed and choreographed with a wild and wondrous ‘On Air‘ vibe by the talented Will Davis (Signature’s Everybody), the charm of the con is spread wide and thick, and the talented cast brings its brotherly love up front and center, living the high life of a unique style and design that we can happily embrace. “I’m not sorry I came” says the nervous  and unsure brother, and I can totally jump on that bandwagon.

The extra-ordinary tale of slick dreamers and wide eyed wonderers, Addison Mizner and his brother Wilson Mizner set forth on a scandalous tour across America giving us a spectacularly smart live radio show treatment conjured up by the inventive scenic designer Donyale Werle (Broadway’s In Transit), with wonderfully snazzy costuming by Clint Ramos (Broadway’s Once on This Island), distinct lighting by Mark Barton (LCT’s Admissions), and a clear and concise sound design by Leon Rothenberg (Broadway’s Hillary and Clinton). It’s really a magically opening, with the ‘On Air” sign flashing gleefully to draw us into the rigged routine.  It grabs us by the forearm, gently and sweetly tugging us into the beginning of the desperate twentieth century. And we couldn’t be better guided than by the gloriously voiced sly dog himself, Raúl Esparza (Broadway’s Company, Kennedy Center’s Chess) as slick Wilson Mizner as he easily ‘five card studs’ us from the Klondike Gold Rush to the Florida real estate boom of the 1920’s with as many shady stops along the way as one could image.  He’s the perfect fit for this character, sliding easily into the nest of whomever is needed at the time, including his puppy dog brother, Addison Mizner, played with extraordinary heart and soul by the wonderful Brandon Uranowitz (Broadway’s Burn This). The two are a match made in musical theatre heaven, and what a wild ride they go on, together and then separately. If only the highways and byways of this Road Show were more cleanly defined and less chock full of nicknacks and souvenirs, we might get a broader sense of the journey, and a more touching view inside these two boys’ mind and soul.

The stylistic starting point is strong even when confusing, with a super complicated journey ahead for the both of them.  “Brotherly Love” and “Game” are Sondheim solid, but “Addison’s Trip” and the “New York Sequence” feel overly messy and dense with details of too much global and career action to keep a handle on. Chuck Cooper (Broadway’s Prince of Broadway) as Papa Mizner is shaky at first, but hilarious in his repeated attempts to state “It’s In Your Hands Now“. He isn’t given much else to do, to be honest, but Mary Beth Peil (Broadway’s Anastasia) as the surviving widow and wife, Mama Mizner, plays it increasingly witty and wise, especially in the hypnotically smart and stinging “Isn’t He Something!“. With those lyrics, she reminds us (even though most of us didn’t quite need it) of Sondheim’s turn of a phrase, stringing together shameful praise while cutting her sweeter son’s heart with each gracefully sung line.

It’s in these side notes where the true glory of Road Show lies, especially when Jin Ha (Broadway’s M. Butterfly) enters the train car, squeezing himself in to the seat beside the desperate Addison. Ha captures our gaze quickly and easily as the sad and lonely rich boy, Hollis Bessemer. It’s no wonder Addison can’t resist, his presence and need intoxicates, taking this piece, finally, into the heart and blood of Road Show. He’s the “Best Thing That Ever Has Happened” within that song and this musical, giving this road weary tour space to stay put and relax. Even as director Davis casually wanders off from his initial wise use of the radio station set up to get lost in the numerous doll houses while playing with oversized beach balls, the “Talent” of Ha, especially when paired with Uranowitz steals the spotlight away from Esparza’s majestically voiced one-man pony show and allows us to kick off our shoes for an authentic minute or two, and feel the love of attachment and honesty.

Even in the messiness of an overgrown plot and details, the ensemble, made up of a solidly talented eclectic crew; Brandon Contreras (Signatures’ Our Lady…), Rheaume Crenshaw (Broadway’s Amazing Grace), Daniel J. Edwards (Broadway’s Anything Goes), Marina Kondo (Public’s Made in America), Jay Lusteck (IRT’s Beowulf), Liz McCartney (Broadway’s Sunday in the Park..), Matt Moisey (Broadway’s Fiddler…), Shereen Pimentel (Broadway’s The Lion King), Sharone Sayegh (Broadway’s The Band’s Visit), and Vishal Vaidya (Broadway’s Groundhog Day), shines bright. The voices all register their greatness with ease leaving us wanting more of the Sondheim magic. Music director, James Moore (Broadway’s Gigi) and music coordinator, Seymour Red Press (Broadway’s King Lear) bring this musical defiantly out of its long dark history of theatrical attempts to the joyful and vivid radio stage, giving us all, as always, the finest of work exuberantly performed by the New York City Center Encores! Orchestra. The sound and song performances elevates this Road Show up higher than it might deserve, basking in its talent and slickness. Structurally speaking, this show falters on its wild road journey to the final product. Like a number of musicals out there trying things out on the road to Broadway, this paraticular Road Show still has some traveling and work to do, but the kernels of wise intent by Sondheim, Weidman, and Davis sparkle and make me proud, like a coked up con game preacher singing the praises of his miraculous slide.