Eric Bentley is Given A Birthday Celebration at Town Hall

Eric Bentley is Given A Birthday Celebration at Town Hall 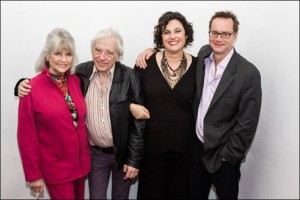 Legendary playwright, singer, editor, translator and Theatre Hall of Fame inductee Eric Bentley turned 99 years old. In celebration of this milestone and a century of his contributions to the international theatre world, a special one night-only birthday celebration “Happy Birthday, Eric Bentley! A Centennial Tribute Concert” took place on December 7, 2015 at 8:00 PM. 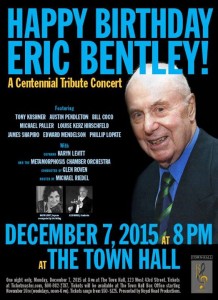 Hosted by Razzle Dazzle author Michael Riedel of The New York Post, the weekly TV chat program “Theatre Talk” and long time friend of Eric Bentley the evening was well received. Austin Pendleton stated “Eric Bentley introduced me to the idea that the passion for theatre could actually involve thought, and that thought would not only not work against the passion but would actually deepen it. I think he introduced that idea to a lot of people. Or, if he didn’t introduce it to them, he made it richer and more exhilarating. He’s irreplaceable.” Roger Copeland, Professor of Theater and Dance, at Oberlin College and Conservatory and Phillip Lopate of Columbia University chimed in with quips and antidotes about the wise man of the hour. In between celebrated soprano Karyn Levitt accompanied by Eric Ostling featured a recital of Hanns Eisler songs in English by Eric Bentley. The two have a forthcoming CD, “Eric Bentley’s Brecht-Eisler Songbook,” available from Roven Records starting in January 2016.

The 2nd act started with Edward Mendelson also from Columbia University where Eric Bentley taught. Louise Kerz Hirschfeld, theatre historian and president emeritus of The Al Hirschfeld Foundation, James Shapiro from Columbia and Michael Paller of The American Conservatory Theater talked about their love and respect. Readings from Eric Bentley’s classic works by Tony and Pulitzer Prize-winning playwright Tony Kushner as well as featured Songs from Mother Courage by Darius Milhaud and Eric Bentley, performed by Karyn Levitt with the Metamorphosis Chamber Orchestra conducted by Glen Roven, and dedicated in solidarity with the people of Paris and in memory of the victims of the recent atrocity were the highlights.

Mini cupcakes added to the festivities and this night of theatre history.