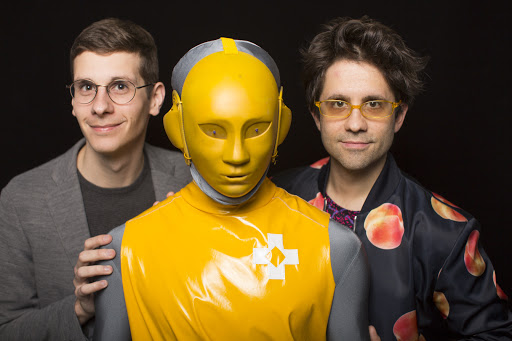 Following The Chase Brock Experience’s acclaimed Off-Broadway premiere in 2018 and recent touring debut at The Wilson Center in Wilmington, North Carolina, Eric Dietz’s original music for The Girl With the Alkaline Eyes is now available for digital steaming.

The Girl with the Alkaline Eyes is a futuristic A.I. thriller set in a high-tech lab where a young, hot-shot coder has been hard at work on a secret project: an extraordinarily lifelike creation who will change not only the life of his creator, but the lives of everyone around him. With a plot out of a binge-worthy Netflix drama, this unique dance-theater piece was punctuated by Mr. Dietz’s score that New York Stage Review said ”shimmers and pulsates with an echoing, electronic sheen that drives the story forward with anxious energy.”

The Girl with the Alkaline Eyes was developed in residence with NYU’s Center for Ballet and the Arts. The commissioned score was supported by a grant from the O’Donnell-Green Music and Dance Foundation. The Girl with the Alkaline Eyes album was recorded and mixed by Jeff Cook at 2nd Story Sound, NYC, and album art was designed by Esther Wu who also designed the artwork for the original production.

Suzanna BowlingAugust 22, 2021
Read More
Scroll for more
Tap
Jaime Lozano and the Familia First Single Nothing Is Broken is Released
What To Watch April 6th To Take Away The Blues