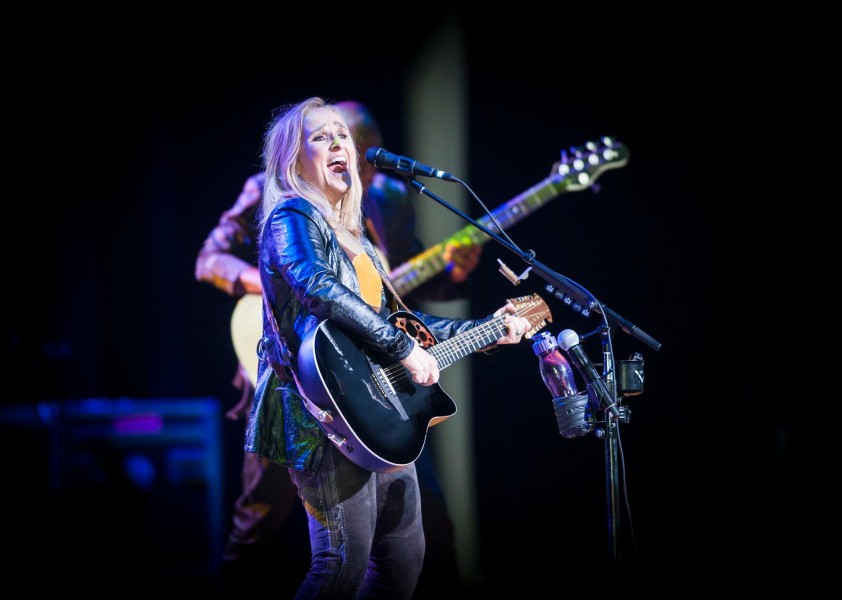 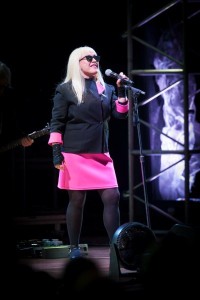 What a novel idea for a musical touring partnership. Blondie and Melissa Etheridge rotating double-billing on a concert stage.  What seemed initially like an unconventional enterprise of divergent musical genres, this hot summer tour features two powerful, iconic, female performers doing what they do best.  With revolving billing at each stop, the night I attended,  Melissa opened and Blondie closed.  Etheridge brought her signature guitar licks, throaty, dynamic, vocal bravado and singer-songwriter talent, while Blondie continues to engage the masses, generation after generation, with her cool, detached punk rocker meets rock and roll stage presence and an infections blend of pop music. 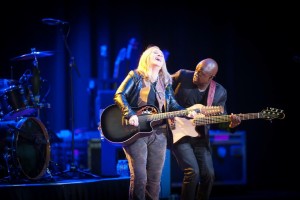 Etheridge opened her eleven song set at the Ravinia Festival, with her defiant hit  If I Only Wanted To.  “Nice to be here in the winter of July 2nd” she joked to the audience on this unseasonably cool summer day.  After concluding No Souvenirs and I Want To Come Over, it was time to chat with the crowd.  “Was it fun winning the Stanley Cup?” she joked, knowing the intense shared pride the enthusiastic audience would muster.  “I have in-laws in Chicago” she reminded her faithful fans.  Wearing bell-bottom pants, a mustard patchwork vest and a leather jacket, every inch the rock star persona, Etheridge switched to a turquoise guitar before unleashing a newer song, Take My Number.  With such personal lyrics as “Everybody stumbles, everybody hits the ground.  No use running scared when those changes come around.   You really shouldn’t drive, you’ve had too much to drink.  You shouldn’t be alone where all you want to do is think.  So take my number, or I can take you home.” This  modern day Janice Joplin,  Melissa took us to church with her raspy voice, siren’s call, reverberating throughout the venue and into the crowd’s collective souls. 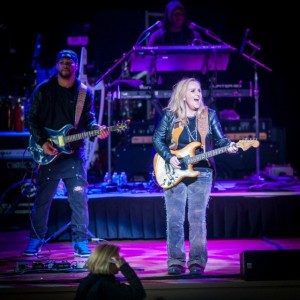 Joined with band mates Arden Altino on keyboards who Melissa joked has “the most amazing smile in music today,” Brian Delaney on drums, Brandyn Porter on guitar and Jerry Wonda on bass, the band breezed though Chrome Plated Heart, Like a Preacher, and the global hit Come To My Window. Continuing the celebration from the Supreme Court’s ground breaking decision to recognize Same-Sex Marriage, Melissa shouted “We can be married from sea to shining sea” to the cheers of thousands.  Up next, the new song  Monster a powerful theme about being ostracized and feared as an outsider, mirrored by her own personal experience growing up gay. “They’ve been calling me the monster, ever since the day I was born. Here come the monster, everybody run. Shouting out loud and beating that drum. I’m gigantic, titanic I might cause a panic. Ready or not baby here I come.” I’m The Only One featured an impromptu harmonica solo and then a group photo taken by Melissa on her very own selfie stick. “Chicago, you know I love you. You are very, very special” she shared before exiting the stage.

Etheridge’s final two encore songs included Bring me some water and Like the Way I Do. With passionate Wild West meets Carlos Santana inspired guitar riffs  Etheridge sang “Tell me does she love you, like the way I love you.  Does she stimulate you, attract and captivate you. Tell me does she miss you existing just to kiss you.  Like the way I do”. The words, fast, furious, heartfelt, sensual, suggestive and delivered with the throaty conviction of a woman “infatuated, haunted, and electrified” by her own all-consuming urges.  “Does she inject you, seduce you and affect you, Like the way I do.” The same could be said for an artist who continually tours, respects and recognizes her own ardent fan base, who is always there, ready for more. 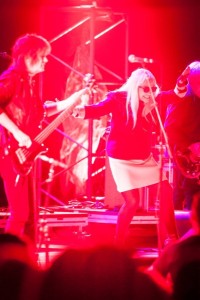 Celebrating their 40th anniversary as a band, Blondie took the stage next.  If Etheridge is wild, Harry is reserved, nonchalant, a rock and roll Goddess who never lets them see her sweat.  Adorned in a pink suit, sequin black fingerless gloves, black platform heels and dark sunglasses, front woman Deborah “Debbie” Harry appeared at home center stage beginning their set with the classic hit One Way Or Another.  “We are Blondie and we are very happy to be here with Melissa Etheridge” she stated before breezing through No Guarantee,Hanging On the Telephone, and Mile High an ode to all the pilots, stewardesses and lovers up in the air. 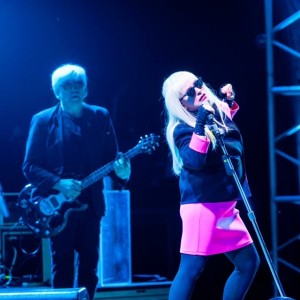 An early voice in the American new wave and punk rock genres of the late 1970’s and early 1980’s, Blondie represented a fusion of rock and roll angst punk regeneration.  With former Playboy model Deborah Harry as the front woman and Chris Stein, the musical creative genius behind the band.  Backed by Tommy Kessler on guitar, Matt Katz-Bohen on keyboards, Leigh Foxx on bass and Clem Burke on drums next up were the monster hits Call Me and Maria, a new song Rose By Any Other Name and the first song to ever feature rap that chartered at #1, Rapture.  In the midst of Rapture, a surprise mash up that included the Beastie Boys classic, Fight For The Right To Party. 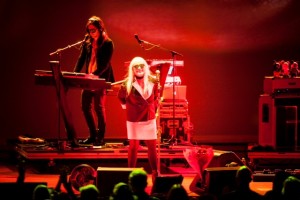 A reggae infused The Tide Is High was Blondie’s third career number one song in America, and was still a crowd pleaser as the venue jumped to its feet.  “The tide is high, but I’m holding on. I’m gonna be your number one.  I’m not the kind of girl who gives up just like that.  Oh, no.”  And we are the better for it.  Just turning 70, yes 70 is not slowing Harry and company down.  Finishing their set with Atomic, Sugar on The Side and the definitive Blondie classic, from the album Parallel Lives, Heart Of Glass. “Once I had a love and it was a gas. Soon turned out had a heart of glass. Seemed like the real thing, only to find. Mucho mistrust, love’s gone behind.”

A fabulous night of synth pop, rock and roll, female empowerment, and hit records, Melissa Etheridge and Blondie proved extremely suitable tour mates.  Sharing a heavy touring schedule and a career longevity rarely seen in this, or any industry, these pioneers of popular music continue to consistently inspire and entertain.  And what greater gift is there then that?