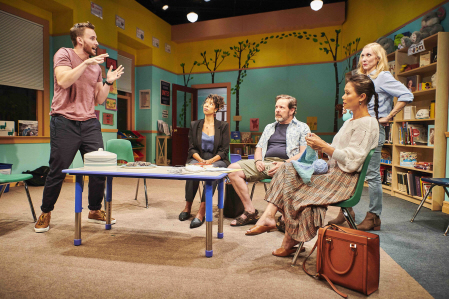 Vaccinations are a controversial subject, that Jonathan Spector’s new comedy Eureka Day, examines. This extremely funny play, has you thinking about a subject that has drawn lines between the different factions. Originally commissioned and produced last year by Aurora Theatre Company in Berkeley, California, Eureka Day is selling out at Walkerspace and could use a bigger venue to accommodate the crowds.

The action for the most part takes place in a classroom at a private school. Five parents are on the committee to make sure the school stays as progressive as possible. In their first executive meeting of the academic year, Don (Thomas Jay Ryan), the head of Eureka Day School, is busy discussing the rules with Suzanne (Tina Benko), the founder of the school, Meiko (K.K.Moggie), a single working mom and Eli (Brian Wiles), a stay-at-home dad, who is a tech millionaire. The group values that all decisions are made by consensus. Each year they welcome a newcomer. This year it is Afro American, lesbian Carina (Elizabeth Carter), to tick off all the boxes of being diversified.

The group worries about disposables like plastic plates and the use of non gender-specifics, as they thrill when their children cheer as the other team scores.

This well-meaning-liberal-agenda goes astray when an outbreak of mumps delivered by a letter arrives from the health department. All of the un-vaccinated students must immediately be quarantined, which is most of the school. As the group holds a virtual town-hall meeting via Facebook, results are shown via projection. The Facebook chat and the group’s attempts to rein in the comments are both hilarious and disturbing.

In the end for all of their professed sensitivities, nobody listens to anybody else and in the end a cult mentality wins out.

Tina Benko, radiates as a self-assured parent who has experienced the effects of vaccines. Her self contained persona crumbles when relating why she feels the way she does. Thomas Jay Ryan as the broke, but kindly educator shows how one-side succumbs to finical pressure. K.K.Moggi and Brian Wiles, who are having an affair, allow us to see the transparency of non-connection. But it is Elizabeth Carter, who gets her way and eventually takes over.

Adrienne Campbell-Holt’s direction is spot on and manages to drag some really marvelous performances out of her amazing cast.

This play is topical, brilliant and timely. At one point Eureka Day talks about the vaccine trials and claims that they have disproven the fact that vaccines are unsafe. What they failed to mention was that the trials were run by the pharmaceutical companies who created the vaccines. Nobody won, despite an alarming amount of deaths and disabilities.

Suzanna BowlingJanuary 18, 2023
Read More
Scroll for more
Tap
A Visual, But Inconsistent Lear: That Old Man I Used To Know
I’d Like to Propose a Toast to the 2019/20 Broadway Play Opening Night Schedule Excitement