Eva Noblezada is so excited to be returning to the Green Room 42 stage on April 3rd. It’s a very simple show. She sings songs. Everyone laughs. And we all remember how much we missed live performances. Oh, and there may be a game involving audience participation and tequila shots (if you’re of age). See you there, friend. 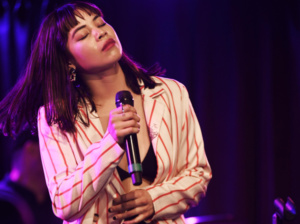 Eva recently starred in the title role for director Diane Paragas in the award-winning Sony Pictures film, Yellow Rose. She’ll next be seen starring in Amblin’s Easter Sunday.  She won a Grammy and was nominated for a Tony Award for starring on Broadway in Hadestown. It was her second Tony nomination in her first two Broadway roles, following her earlier nod in the title role in Miss Saigon in 2017. She previously starred in Hadestown at the National Theatre in London after being a lead in the West End revivals of Miss Saigon and Les Miserables. Noblezada was a high school student when she was discovered by casting director Tara Rubin at the 2013 Jimmy Awards in NYC. Tickets for Eva.

After countless sellout performances at the Green Room, Reeve Carney returns April 3rd to play another solo concert while starring in Hadestown on Broadway. He is best known for his portrayal of Dorian Grayin on Showtime’s Penny Dreadful, Riff Raff in Fox’s Rocky Horror Picture Show Reimagining, as well as originating the role of Peter Parker in Julie Taymor/U2’s Spider-Man Turn Off The Dark.

The show will feature selections from his 5-time Independent Music Award Winning album, Youth Is Wasted, as well a few surprises from the Broadway canon and the Great American Songbook, Reeve delivers a one-man-show cabaret that feels more like an invitation-only after-party than a traditional concert performance. Tickets for Reeve.