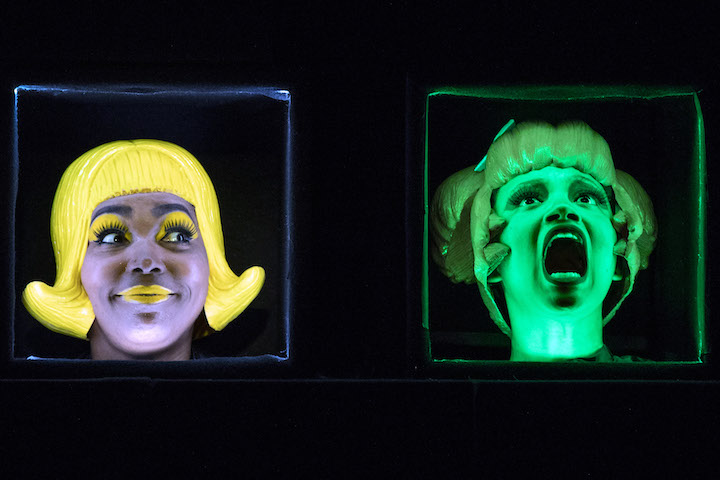 In this production Kiersey Clemons and Liz Mikel start off in “Pomegranate,” as disembodied heads on display. In this piece the first woman’s brother is not only a buyer, but one that is rough and most likely put her on the self as he has done so with his own wife. They discuss the fate of men who treat them as nothing more than a commodity. Ensler was prompted wrote this piece in response to ISIS capturing women and selling them to be raped. These two women’s bodies are owned by others, not themselves. 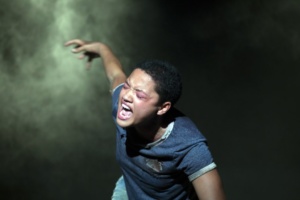 The second play, “Avocado,” is a 16, girl (Kiersey Clemons) raped by her father and sold by her mother into sexual slavery. She is in the darkness of a shipping container full of rotting avocados, trying to immigrate to a world that will not see her as something to be used, abused and discarded. She doesn’t have any control over her life, yet she yearns to escape and be free. 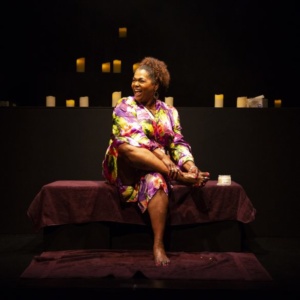 The third play, “Coconut,” breaks the fourth wall, as woman (Liz Mikel) slathers herself in coconut oil. As she methodically rubs it into her feet, making her body  moist and alive.  As she rubs the oil in she starts to connect with her body, displacing the myths she was told, until she is bare breasted. She asks the audience to witness, saying, “We need to be seen for how else do we know we exist?” However, we are not asked to be a witness, rather we are forced and told if we do not that we are in the wrong.

Under the direction of Mark Rosenblatt this trilogy raises awareness, giving a voice to women who are enslaved and are unable to connect to their bodies. It is a tough evening to sit through and at times the anger overwhelms the senses.