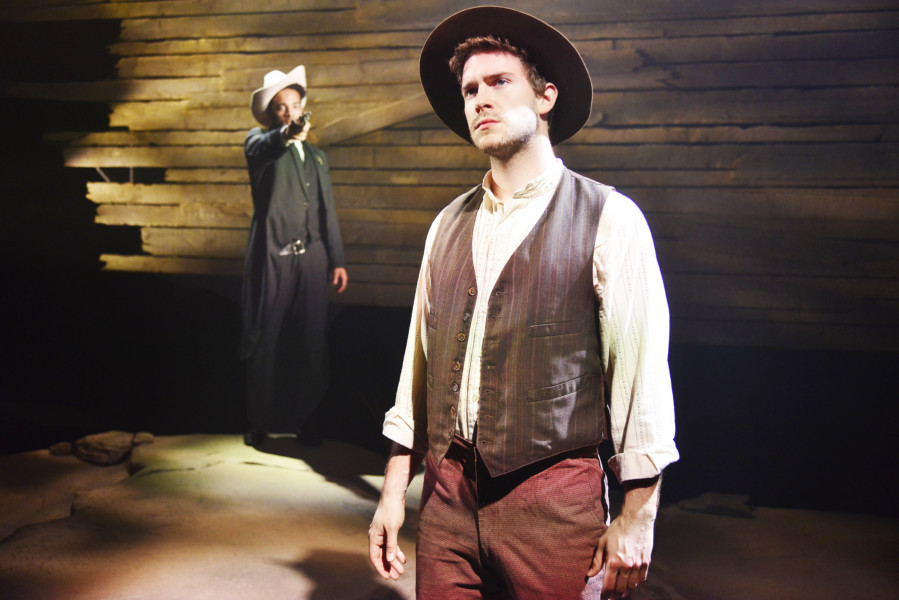 Even Bruce Willis Producing Can Not Save Billy The Kid

Even Bruce Willis Producing Can Not Save Billy The Kid 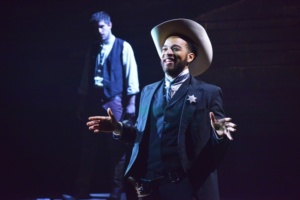 “My mind to my hand gun goes straight. But my mouth is jammed full of words, thoughts. When they get out, I hope they go in some direction.”

After seeing the off-Broadway production of Must, I was seriously confused as to why Bruce Willis had backed and produced this play written by Charles Cissel. Turns out Cissel mixed the drinks at Kamikaze and Cafe Central, and is now the bartender at Jean-Georges. Unfortunately a bartender does not always make a good playwright. 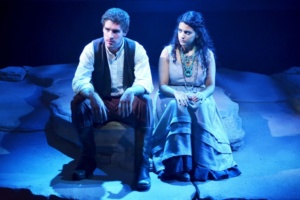 Must follows Billy the Kid (Brendan Dooling) the day before he was killed in 1881 in New Mexico Territory, at age 21. In what seems like an esoteric dream, we hear Billy state; he was a “killer”… but definitely not a “murderer”, as if there is a difference. Like Les Miserable, Billy has his own Javert in the shape of Sheriff Pat Garrett (John Clarence Stewart). The two once unlikely friends drink to excess and live as each day is their last. Now for notoriety, the lawmaker has turned on Billy and is hunting him down in a cat and mouse manipulative game. As Billy contemplates his life, visions from his past appear and disappear. First up is his abandoned mother Catherine (Sally Ann Triplett), who guilts Billy every chance she gets. His girlfriend Luisa (Meredith Antoian) who is either Mexican or Indian as she keeps asking him the meaning of words. She shows him passion and unconditional love. His long lost father (Mark Elliott Wilson), finally appears, though he denies it every chance he gets. Through all these visitations Billy ponders the meaning of life, his life and eternity.

Brendan Dooling is so low key, that even in the first row it was hard to hear him. John Clarence Stewart as Pat Garrett manages to surpass this meandering script. Though he smiles so often with ultrabrite teeth that he seemed at times like Cleavon Little in Blazing Saddles. Sally Ann Triplett, Meredith Antoian and Mark Elliot Wilson are so bogged down with poetic nonsense it is hard to judge.

“When I took a life, then it gave me more space to live. I thought. Not out here but in my head. My time. My, I thought precious time. In that moment, between pulling the trigger and following it to the end, that time, though tiny, was my time, my precious time, a pause from life. But then I take the life and get on my horse and run. Everything became a line. Shoot. Line. Run. Line. Then I get down here, and a tumble weed crossed my path. Being blown by the wind. It was on the wind line. But when you looked at it, the tumbleweed was round. It confused me. I kept watching. Then the wind lost it’s strength. The tumble weed kind of wavered. Is the wind going to come back? It waited. Nope. Wind was gone. It settled into the ground. It was almost smiling. Happy to be in one place. Happy he made it through. Thinking, this is where I’ll end up. Finally.” Billy

The topic of Billy The Kid is an interesting subject, unfortunately Must is like dust in the wind.