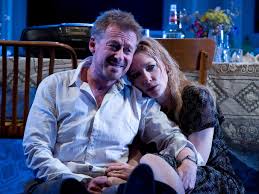 Even Cate Blanchett Can’t Save The Present

Even Cate Blanchett Can’t Save The Present 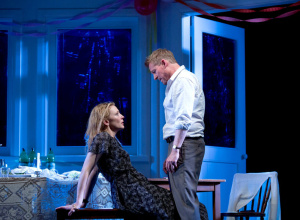 The Present on Broadway is based on Chekhov’s Platonov, earlier seen in a 1984 adaptation by British playwright Michael Frayn as Wild Honey. Now Cate Blanchett’s husband, Andrew Upton has taken on the piece for the final season at the Sydney Theatre Company and it has arrived on the Great White Way. This is Chekhov’s first full-length play, to the tune of just three hours long. 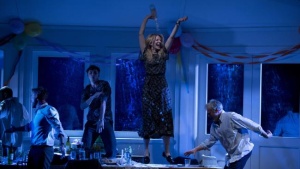 The play looks at 20th century marriage, nostalgia, romance and regret between old friends. We have gone from a pre-revolutionary Russia to a post-perestroika one, to a country meeting house of a once wealthy widow Anna Petrovna (Blanchett), who is celebrating her 40th birthday. Her presents include a party, pills, guns and the disdain at growing old as the group drinks bottle after bottle of vodka. Womanising school teacher Mikhail Platonov (Richard Roxburgh), self-deluding doctor Nikolai (Toby Schmitz), the simple, but eager to please Sergei (Chris Ryan) and Anna are all childhood friends. For Platonov, Anna is the one that got away. Anna in the meantime is completely broke after the death of her husband, “the General. This party is her strategy to manipulate a marriage between either Yegor (David Downer) and Alexei (Martin Jacobs). Caught in the game are Platonov’s wife Sasha (Susan Prior),  Sergei’s adored new wife and Platonov’s ex-lover Sophia (Jacqueline McKenzie), Anna’s stepson Nikolai (Toby Schmitz), whose very young girlfriend Maria (Anna Bamford) also desires Mikhail and he her. Mikhail and Anna play a tango of volcanic chemistry, as events spiral out of control. 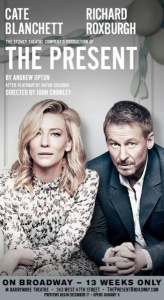 Blanchet and Roxburgh are electrifying, however Roxburgh nor the role of Platonov carry the burden of being a male sex symbol. We never understand why all these women want and adore him. He holds a dull job, his dreams are smashed, he’s a drunkard, he’s broke, self-loathing, a sex addict and he’s not drop dead gorgeous, so why does everybody want him? We get why Anna does, their chemistry explodes, but the young and beautiful Maria….?  Also we are suppose to be in Russia yet nobody has a Russian accent. Is this like color blind casting, now we are not suppose to hear? Also the theme is now rather, blah, because turning 40 is no longer holds the doomsday effect on our lives as it once did.

What is worth seeing is Ms. Blanchett, who is seriously one of the best actresses of her time. From the beginning with her twitches and her bored with life attitude, she is utterly transfixing. She commands the stage and dares you not to watch her. When she wildly dances on the table, she detonates the audience as she is about to do the same to the house and her guests.

Roxburgh, is the perfect drunk and does hold our attention. We root for Platonov and Anna, even through we know they are doomed. I also found Ms. Bamford to hold her own against Ms. Blanchett and the scenes with Bamford and Blanchett and Roxburgh and Blanchett were transfixing.

The Present is a true ensemble piece and the cast does well bringing these characters to life.

What I found tedious was the script and the direction by John Crowley. The first act seemed like three hours due to the unfocused script. Thank-God for the gun blasts that made sure you stayed with the piece.

Guns, bombs, stellar performances are all here. As Anna ties a perfect pink bow, the play knowing that three hours is more than enough ends just as neatly as that neatly tied bow.

Suzanna BowlingSeptember 18, 2022
Read More
Scroll for more
Tap
A Look Inside This Years The Association of Performing Arts Convention
Healing Fractures A Show with Hope Heart and Soul