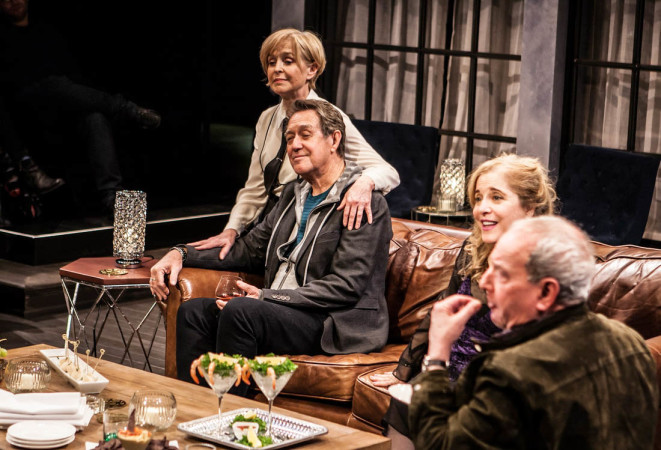 Evening at the Talk House Is Too Much Blah Blah Blah

Evening at the Talk House Is Too Much Blah Blah Blah 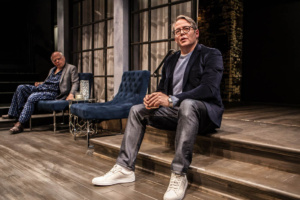 Wallace Shawn’s Evening at the Talk House starts off serving sugary treats, as the cast mingles wth the audience. Sadly that is the best part of the whole show. What this play is trying to say, makes no sense. The New Group as always has attracted a well known cast, but this time they all seem like they’re in the same play. The Talk House is a club where Robert (Matthew Broderick), starts off the show with what seems like a 20 minute monologue about the other characters we are soon to meet. Broderick sounds like he is doing Ferris Bueller and not a writer who is still successful despite the way the world has become. It is the tenth-year anniversary of a play in which all played a part. We meet the producer Bill (Michael Tucker), now a successful talent agent; the composer Ted (John Epperson, otherwise known as Lypsinka) who sold out to write advertising jingles; the lead actor Tom (Larry Pine), currently starring in a hit sitcom for Robert and the wardrobe supervisor Annette (Claudia Shear), who works as a private tailor for wealthy clients. We are also introduced to the club’s owner Nellie (Jill Eikenberry) who acts like a hostess and Jane (Annapurna Sriram) her server who once starred in a TV sitcom and was a struggling actress. Nellie is hosing a down on his luck actor Dick (Wallace Shawn, yep the same one who wrote the show), who wanted to be in the play but was once a beloved sitcom star who time has passed. He is fallen temporarily living at the club after being beaten to a pulp by “some friends.” The man is a sadist as he claims he enjoyed the beatings. 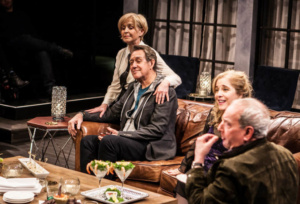 We are in the future, where theatre is limited, elections are held every three months with the same cast of characters, blackouts are frequent and citizens “target” undesirables and some even assassinate them by poison. The Talk House is where everybody gathered after performances and it is now on it’s last legs, however the set by Derek McLane has furniture that looks new and the establishment looks like a very expensive brownstone. For a a private club that’s seen better days, I would like to see what it looked like in its hey day. 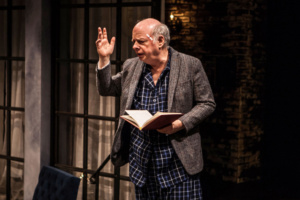 There is much being said here, but it is so oddly stated that you start to tune out. ironically Mr. Shawn gives himself a nice monologue that again makes no sense. The best scene in the whole piece is between Mr. Broderick and Ms. Sriram where we actually see a moment of connection, where dialogue is not as vague as the rest of the play. 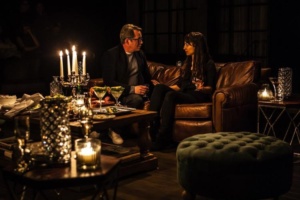 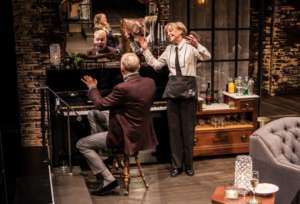 Through out the play an excessive amount of snacks are served, almost like the context of this play. Talented actors here were undernourished with a play that had any substance.