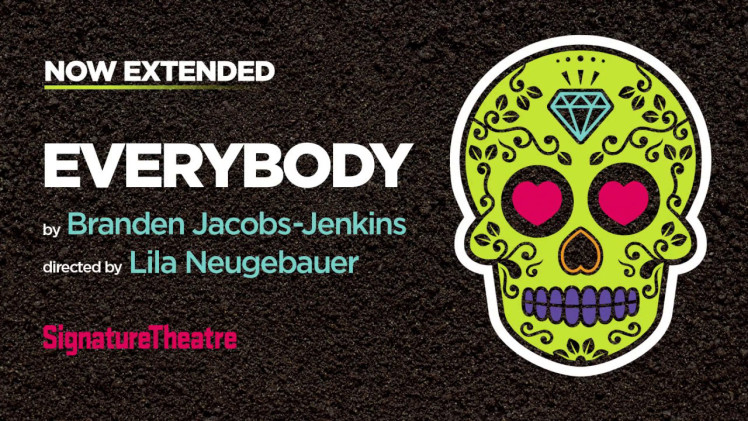 He Says: Everybody: Enough Said is Too Much, and Not Enough

He Says: Everybody: Enough Said is Too Much, and Not Enough 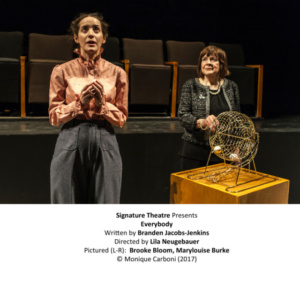 Hey Everybody, I don’t quite know what to say about Everybody, the strange existential experiment that is going on over at the Signature Theatre. This is definitely one of those productions that anything I tell you, and I truly mean anything, will dampen the original and unique experience one will have sitting in that audience with Everybody. From the moment it starts to the moment it ends, one will have to accept the journey that we are being taken on by director, Lila Neugebauer. It’s a brief 90min engagement of our five senses, our minds, our love and understanding as we dive into a modern riff on the 15th Century morality play Everyman. It will take strength and resilience to get on board for the ride that we take with Everybody, hopefully with our friends, with our lovers, our cousins, and our siblings. It’s one for all, and all for one, if you are accepting of the journey that one can take with Branden Jacobs-Jenkins, the playwright of Everybody. Or you can just count on love to carry you through. 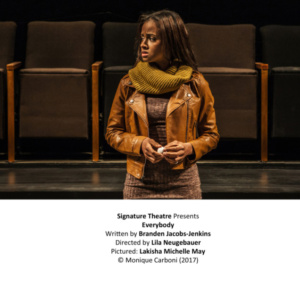 Is it worth the time that we will give or is it the equivalent of death in the theatre, only you can answer that. I had a hard time staying attuned to the dream-like experience, although the dancers in the darkness were pretty spectacular to see (simplistic and exacting design work by: Laura Jellinek/scenic; Gabriel Berry/costume; Matt Frey/lighting; Raja Feather Kelly/choreography). The gimmick is interesting but slight and definitely not thoroughly intoxicating. I shut my eyes and tried to free float through the dream at moments as the dialogues in the dark washed over me with less and less impact (great sound and original music by Brandon Wolcott), because the road being traveled was pretty inevitable. The cast does an impressive job engaging in all those roles. How many are involved and who do they play? I’m not even going to tell you that, but know that their hard work is fun and appreciated, especially the hilarious Jocelyn Bioh and Marylouise Burke.

So I’ve told you a lot while telling you very little (I hope). Did I like it? I liked all the stuff and the bad shitty things that we see. It made sense and was witty and funny at times.  But I wish I was more fully engaged with my mind and my heart, as the journey that Everybody takes is huge in topic and scope, but this play just didn’t feel big enough. Or deep enough. It is an experience though, one to enjoy and hopefully be inspired by in a way that I can’t tell you. Honestly, I can’t. So enough said. And nothing exposed. I hope. For a cast list, cause I’m not letting any surprises out of the bag, click here. And don’t say I didn’t warn you…
So for more, go to frontmezzjunkies.com
Related ItemsBranden Jacobs-JenkinsBrooke BloomDAVID PATRICK KELLYEverybodyLakisha Michelle Maylila neugebauerMary Louise BurkeNewRossSignature Theatre
Off Broadway

Suzanna BowlingJanuary 13, 2022
Read More
Scroll for more
Tap
Two Legends Together Chita Rivera and Tommy Tune Two For The Road
Pretty Filthy Gets A Recording and A One Night Celebration at Feinstein’s/54 Below