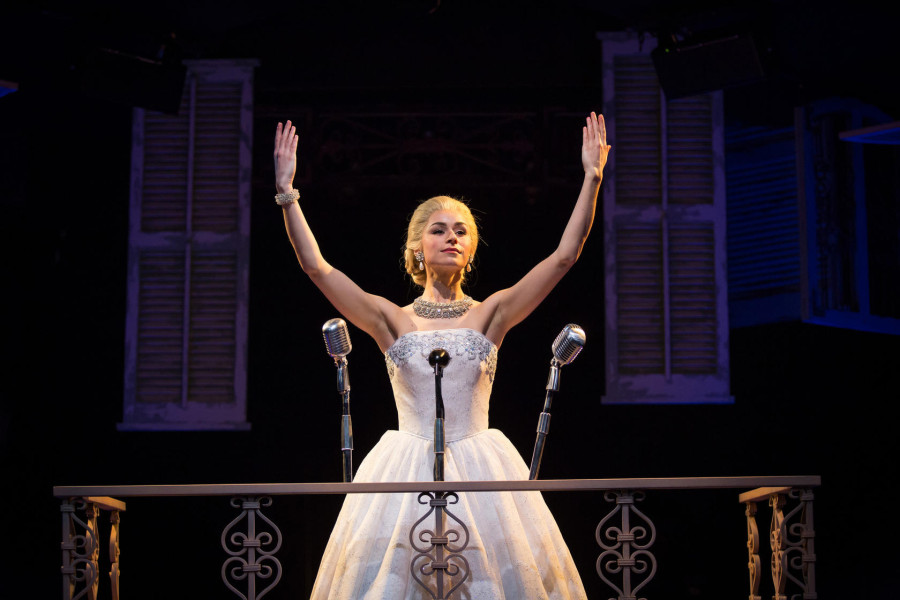 Evita – Not Quite Rainbow High

Evita – Not Quite Rainbow High 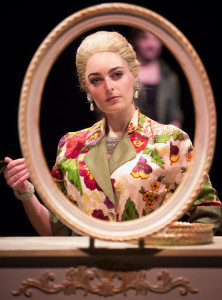 When it comes to determined women seeking power and influence, there is an undeniable double standard at play. The best example carried out nightly on the news, as Hillary Clinton is constantly barraged with superfluous questions about hair cuts and pantsuits while her male counterparts are asked specifically about policy. Martha Stewart ended up in prison for insider trading as a result of a stock sale, while her male counterparts, largely responsible for tanking the American economy, have yet to be brought up on a single charge. I do not know why there is an unspoken visceral bloodlust against ambitious woman. Even first lady Michelle Obama, who herself has faced a blitzkrieg of criticism, was quoted as saying “success isn’t about how much money you make, it’s about the difference you make in people’s lives.” The reason I bring up these influential women, you may ask? In preparation for reviewing the musical Evita, about the very determined first lady of Argentina.  A rock opera written by Tony Award-winning composer Andrew Lloyd Webber and librettist Tim Rice in the late 1970’s, clearly wearing it’s misogynist badge on it’s Dior-inspired sleeve.  Now remounted at the theater in the round in Lincolnshire, Evita was arguably designed as a chronical, both celebrating and chastising a woman armed with ambition, and a fantastic wardrobe. Born into humble beginnings, a starlet in her early twenties, the president’s mistress at twenty-four and Argentina’s First lady at twenty-seven, Eva Duarte Peron was a most indomitable and complex social climber, who balanced love of her husband with the adulation of a nation. 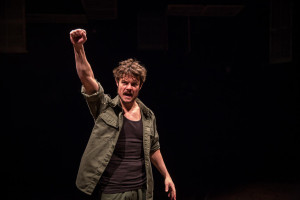 Directed and choreographed by Alex Sanchez, this ensemble cast of 26 works for almost three solid hours, spinning the complicated web that is the life of this most polarizing women. Her country’s people treasured her while the military forces and powers that be loathed her commanding influence over her husband. To bring her to life, two actresses share the definitive role. In her Marriott debut, Hannah Corneau is the primary actress playing the part, with veteran Marriott performer, Samantha Pauly, of whom, I must admit,  I am a big fan. It was Corneau, not Pauly who played the title role the day I attended. As the rock-opera is almost entirely sung through, the vocal heavy lifting is clearly daunting. Forlornly, Corneau proved to be an inconsistent Eva. While she shined during her softer ballads, the almost screeching vocal quality during the larger production numbers made this a heroine hard to root for. Born Eva Duarte, she hitched her wagon to a travelling singer, Magaldi (David Schlumpf) early in her young life. With a one way ticket to Buenos Aires, and not much else, Eva quickly began negotiating her way, horizontally speaking,  up society’s ladder, rung by rung, and man by man. “Argentine men call the sexual shots, someone has altered the rules.” Whether saint or slut, or somewhere in between, the early warnings to “beware your ambition” fell on deaf ears. A chance meeting at a benefit with a rising politico, Juan Peron (Larry Adams) would change both of their fates forever. “I’d Be Surprisingly Good For You” advanced Eva from actress to activist, with Peron quickly becoming President and herself, First lady of Argentina.  As a real world parallel, I recall several interviews by Prince Charles of England lamenting as he was both usurped and eclipsed by his then wife, the far more popular, People’s Princess, Diana. 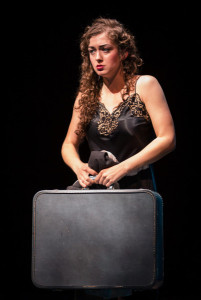 The constant thorn in the side of both of the Peron’s, the story’s narrator, decamisados Che (Austin Lesch) a taunting troubadour detailing the rise of the Peron’s and the rapid faltering of the Argentine economy after they took office. All the requisite songs are here, “Another Suitcase in Another Hall,” “Oh What a Circus,” “And The Money Kept Rolling In” and “High Flying Adored” although the overall effect here is less than “Rainbow High.” Evita is a big show by definition. The larger production numbers work because of the power and passion of a strong ensemble. Any larger, and Tom Ryan’s purposely minimalist set would have detracted from Sanchez’s lavish choreography. Nancy Missimi’s Dior-influenced costumes are something to behold, from the peasants of Argentina to the Upper Crust, quite literally stripped of their influence and clothing by Eva herself in act two. The requisite  “Don’t Cry For Me Argentina”  and  “You Must Love Me” are notable act two highlights, as Corneau is at her best with ballads.  As is Eliza Palasz, as Peron’s displaced mistress. She has but one song to sing, but does it so notably well, I couldn’t help but wonder what her take of the part of Evita would have been like. This girl has a potentially very promising future ahead. Patti Garwood, the orchestra’s conductor and Musical Director Ryan T. Nelson did a notable job bringing this lush and well know score to fruition. As Eva’s health declined toward the end, sadly, so did my patience as this production ended with a quiet fizzle instead of a bang. 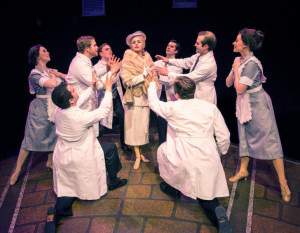 I must be honest, this is not my first time seeing Evita, and I am certain it will not be my last. Broadway in Chicago brought the far more sumptuous tour through the Windy City about 2 years ago and for those who missed that musical masterpiece, this is an affable substitute. Wildly uneven in pace, even at it’s weakest points, the score more than makes up for any specific performer’s short-comings. The political double standard at the heart of this love story is felt even today. The definitive misogynistic script aside, the ensemble is the true highlight of Marriott’s Evita. The social climbing story of a poor girl made “good” may not be a new one, but it is sung and danced with heart by this decidedly dedicated troupe. 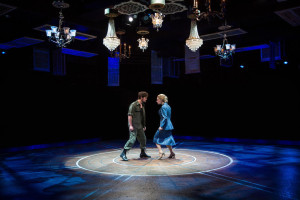 Evita is currently playing at the Marriott Theatre in Lincolnshire through June 5, 2016