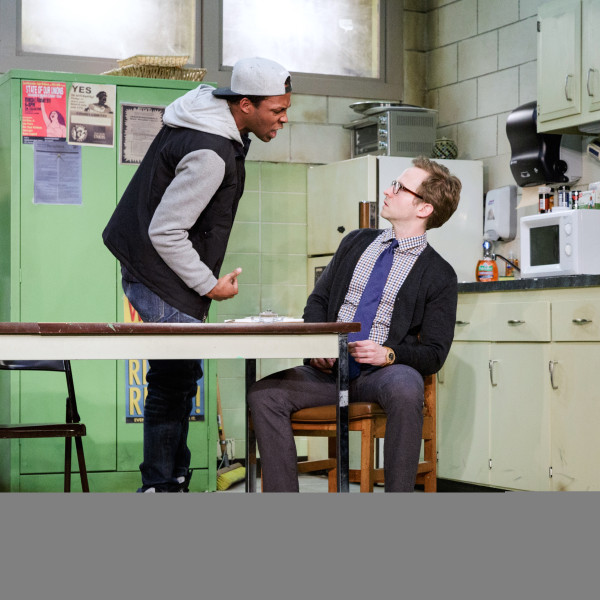 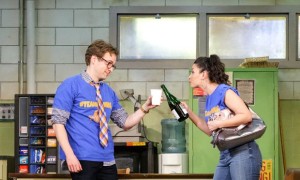 Ike Holter ‘s Exit Strategy puts you in the struggle of a Chicago high school as it faces extinction. This emotional drama at the Cherry Lane Theater by Primary Stages is well acted, well directed and well thought out. 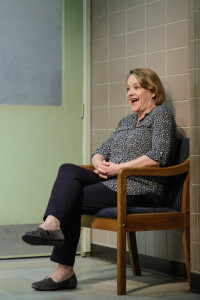 The play starts as the assistant principal, Ricky (Ryan Spahn) is there to tell a non no-nonsense veteran English teacher, Pam (Deirdre Madigan) that the school only has one year to go. As Ricky tries to sugar coat the news Pam glares and snarls like a she cat defending her young. Pam spits venom but not the tears Ricky was expecting. Some of the best lines are in this scene as Pam states “Forty percent of our seniors graduated last year, one could say that I had a feeling.”What happens next was not the ending Ricky nor the audience could have been expecting.

As the teachers’ gather in their lounge, for their last fall meeting we learn how the school seriously has no money. Sadie (Aimé Donna Kelly), has had to bring her own rat poison, since the school thought that plumbing was more important. The teachers must inform their students of the school closing. The senior teacher Arnold (Michael Cullen) has the honors with Jania (Christina Nieves)providing the Spanish translation. Sadie wants to rally to keep the school open, with a public march.

This plan has been done before when the teachers walked out to demonstrate lack of funding and nobody listened or cared. Ricky doesn’t help matters considering everyone thinks he is only for himself.

When a student Donnie (Brandon J. Pierce), hacks into the school’s website, and turns it into a Kickstarter page to raise funds. When Donnie tells Ricky how in public school the students had to request toilet paper because the school was so broke Ricky teams with the youngster to save the school.

The two rally the student into a group they call formed “Team Winning,” to fight the closing. As they fight the teachers and Ricky bond with Ricky starting a homosexual relationship with one of the teachers Luce (a Rey Lucas). Despite the fact that they close down streets, get coverage by every national news channel instead of the school just closing, the school board decides to bulldoze the entire building. In the end nothing has stopped this decline.

The performers are all well cast, with Ms. Madigan dominating the stage with her energetic and layered character.

Kip Fagan’s direction is well done with each scene almost seeming like it is it’s own play. Thom Weavers lighting design sets the tone. Mr. Holter has a lot to say about the American public school system. He is reaching a subject that needs to be addressed and leaves us with plenty of food for thought. I just wish he had kept the gay relationship out of the story though as it was neither called for or added to the storyline. Instead of who is sleeping with whom, we should be thinking more about what do we do when our children are not educated and funding only goes to elections and war.

Suzanna BowlingMay 12, 2022
Read More
Scroll for more
Tap
School for Scandal is The Icing On the Cake of Farce
The DingDong Brings a Delightful Kelley Curran To Light