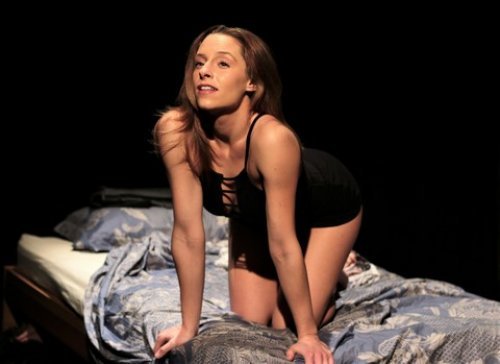 Miriam Weeks also known as Belle Knox, is known for performing in pornography while studying at Duke University. She did it to help pay for her $60,000 per year tuition costs. In late 2013, her career became publicly known on campus, and she faced extensive in-person and online harassment. Knox defended her decision, as well as explaining her views of feminism and rights for sex workers.

Recognize Theatre and MCS Theatre’s Exposed brings that story to light, without crediting where they got the source material. Kristin Heckler, who conceived and directed this wonderfully written and performed piece, has stated that she and the production’s three performers—Sarah Raimondi, Jacob Sebastian Phillips, and Pauline Sherrow—developed the project over a four-year period. They improvised to help create scenes, drawing on interviews with actual women in the adult-film industry, along with other porn-related sources.

Lauren, despite her choices is unashamed about her sexuality or her path. She does however realize that you will be held accountable for your actions, despite the way you rationalize them in your own head. By the end, even when the world lets her off the hook, she still has to grapple with her past in her own mind.

Heckler’s direction is masterful. This show has a lot of sex scenes that are well handled, yet don’t shy away from the what is happening. Heckler has choreographed them by having the performers mirror the carnal acts. Though graphic, you are not made to feel ill at ease or that you are a voyeur. There is partial nudity, strong language due to the nature of the subject but, the play is well-crafted and filled with humor.

Heckler, Exposed, Recognize Theatre and MCS Theatre have shown you can take unknowns, a small budget, a shoebox theatre and create art. This show is well done on all levels and is truly worth seeing. Bravo.

Suzanna BowlingJanuary 24, 2023
Read More
Scroll for more
Tap
Get a Preview of Chick Flick the Musical
Moonshiner is a Howl at Chicago Musical Theatre Festival