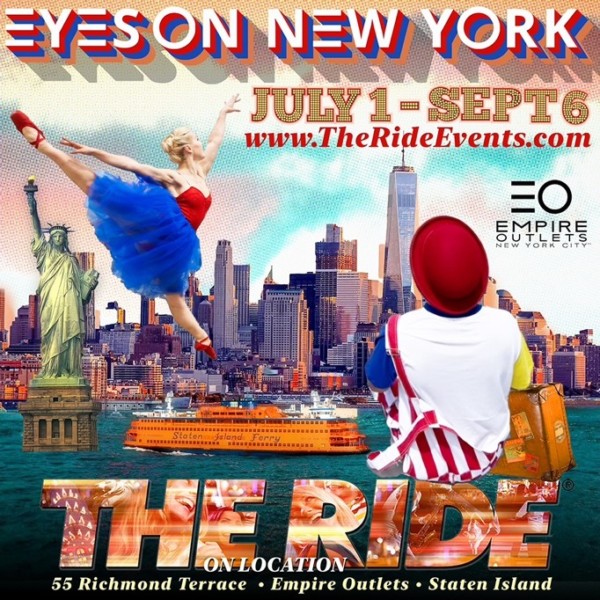 Critically acclaimed and five-star rated, The Ride is proud to announce, Eyes On New York, a new experiential entertainment in The Ride’s global tradition of family fun. This interactive theatrical journey is drenched in music, uplifted by dance and driven by renewal. In a New Performance Space dedicated, created and built for The Ride’s proprietary experiential technology.

The cast, there are seven of them. They are Jarrod Bates, Snö Bunta, Abby DeReamer, Kyla Ernst-Alper, Randy Kato, Pedro Morillo, Jr, Garth Otis. They are internationally acclaimed ballet dancers, aerialists, b-boys, cyr wheel athletes, contortionists, physical clowns, circus performers, variety artists, film and Shakespearean actors. They have performed for audiences from Brooklyn to Mongolia. They are in demand on the international fashion runways as well as the filmed commercials for the European fashion houses.

One of them began dancing at two years old in Minnesota. Another?  Was integral to Estee Lauder’s globally famous Supreme Campaign. They tell stories on stage through the physical genius with which their incredibly balanced bodies are blessed.

Remember their names. You will be dazzled by them again and again.

Eyes On New York will further push the theatrical boundaries and possibilities of The Ride’s proprietary experiential technology.

It is a focused immersive initiative and experiential entertainment that will bow four times a day in Staten Island with laser concentration on Manhattan and its revitalization.

The show is an interactive journey presented in theatrical dance, variety acts, acrobatic agility and circus derring-do; guided by a troupe of internationally acclaimed performers who dance the story of New York City’s journey through the last 12 months.

The score’s original music is by The Ride’s Greg Mozian. Charles DeChants has designed the sound. Costumes are by Renato Dicent. Scenery is by Paul O’Toole.  Lighting is by Michael Petre-Zumbrun.

With Eyes On New York, The Ride has joined forces with Staten Island’s Empire Outlets for a summer residency, located on one of the world’s largest and most beautiful natural harbors. This Exclusive Engagement, including original music, whimsical variety and circus-based performances is determined to be New York City’s summer 2021 destination.

“The Ride is an iconic entertainment experience and we are thrilled to host the show’s return to New York City at Empire Outlets,” said Joseph Ferrara, Principal, BFC Partners. “The show is a spectacular addition to the new offerings we are introducing at Empire Outlets this summer. We invite New Yorkers to come experience The Ride followed by a great dinner at newly-opened Clinton Hall’s expansive outdoor deck with views overlooking the Manhattan skyline.”

“The Ride is deeply appreciative and artistically energized by Empire Outlet’s warm welcome,” said Richard Humphrey, CEO of The Ride. “Teaming up together, we will keep our Eyes On New York to establish The Ride at Empire Outlets as one of New York’s 2021 premiere destinations during this summer of renewal.”

The magic is accessible for free by the Staten Island Ferry which delivers you right to the new performance space and the 340,000 square feet that is the success of the Empire Outlets.

Sunday, July 4th Shows will be at:

With dedicated Fireworks at the big 8:45pm finish.

THE DOWNTOWN EXPERIENCE powered by THE RIDE
World Premiere: May 8, 2017

Just awarded the RTO Summit’s COOLEST NEW PRODUCT Award and its SEVENTH TripAdvisor® Certificate of Excellence Award, THE RIDE has also been inducted into THE TripAdvisor® HALL of FAME; an accolade reserved for less than 1% of the worldwide Travel-Related Corporations reviewed by TripAdvisor’s® 60 million members and 140 million visitors.  Also honored with a nomination for Broadway’s coveted Drama Desk Award in the prestigious Unique Theatrical Experience Category and named the Third Most Successful Youth-Primed Attraction in New York City by FODOR’S Travel, THE RIDE has most recently been nominated for THE CONCIERGE CHOICE Award in the BEST TOURIST ATTRACTION category.  THE RIDE has also been declared one of the Top 8 Must-Attend Wild & Wonderful Spectacles in New York City by NewYork.com who also named THE RIDE’S Gold Star Tour Guide, RORY LIPEDE, as the Most Entertaining Tour Guide in New York. The New York City phenomenon began 2016 by winning The Culture Trip’s Favorite Award as the Must-Take NYC Tour and being named “the most exciting entertainment experience to ever hit New York City” by VIATOR.  All of this homage and accompanying critical acclaim has led to THE RIDE becoming the singularly most requested ticket at Travel Agents’ offices all over the country.  The concept is a brainstorm of design that has resulted in a fleet of multi-million dollar motor coaches whose interiors are a state-of-the-art wonderland of electronic wizardry that guide 49 dazzled tourists around the most fascinating city in the world. THE RIDE’S original genius was its realization that the streets of Manhattan are a fifty-mile stage exhibiting the most riveting visuals on earth.  Adding its own actors to the crowded mix on the street, the huge motor coaches deliver a show worthy of the standing ovations and group euphoria that results at the end of each RIDE.