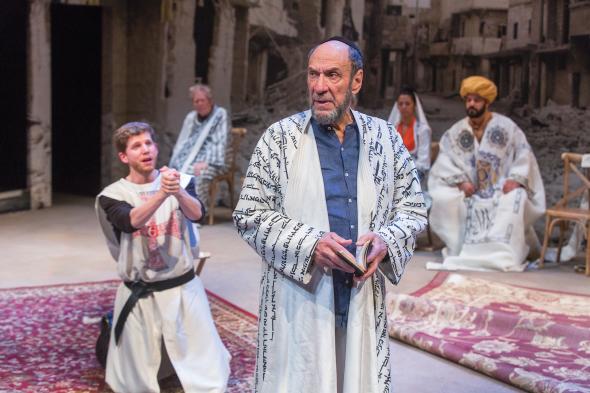 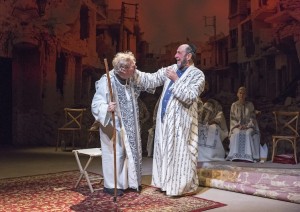 F. Murray Abraham is Nathan the Wise, in Classic Stage Company’s revival of the 18th-century play by German writer Gotthold Ephraim Lessing with a new translation by Edward Kemp is about what religion is the true faith. 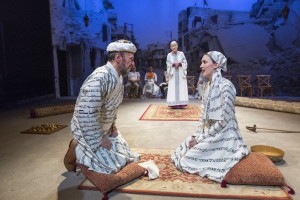 Set in 1192 Jerusalem, Judaism, Christianity and Islam people are set together as their voices overlap in a prologue of confusion. Nathan is a tradesman (Mr. Abraham) whose goodness and faith proceeds him. He has returned from a business trip to discover a fire broke out in his home. His only daughter, Rachel (Erin Neufer), was pulled from a burning building by a Christian Templar (Stark Sands). His wife the Christian Daya (Caroline Lagerfelt), has tried to thank him to no avail, so Nathan seeks out this hero to learn the Templar was saved from execution by the Muslim Saladin (Austin Durant), who is in power over the city. He was saved due to his resemblance to a brother who died and was beloved. In the meantime Nathan’s friend whom he plays chess with a dervish, Al-Hafi (George Abud), now works for Saladin. Saladin’s sister, Sittah (Shiva Kalaiselvan), was forced to convert to Christianity to marry. The Templar, is full of contempt towards the Jews, but strikes up a friendship with Nathan over their common bond for humanity. When the Templar agrees to meet with Rachel, they fall in love. Him more than her, but Nathan holds his doubts when he hears who his father is. Nathan is called on to talk to the Saladin, due to the Saladin’s lack of fund. When he is summoned to his presence he ends up impressing the Saladin who tests Nathan’s wisdom, He asks which of the three interrelated faiths is the one ordained as right by God. Nathan answers with a fable about a father who possessed a precious ring that has been handed down through generations to his favorite sons. Not wanting to choose, the father duplicates the ring. After the father’s death a judge is called in to settle the matter. The ring standing for a single faith and the answer is to whom it belongs. In the end who is who is not what it seems. 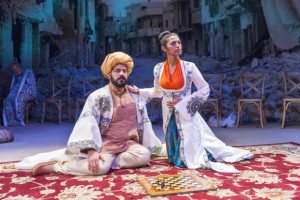 Murray Abraham is delicious in this role as he embodies this pious man with a heart. Both Mr Abud and Mr. Durant create memorable characters. Ms. Lagerfelt is impressive in her speeches. Mr. Sands (“Kinky Boots”) a one note pony whose facial expressions never change and Ms. Neufer is shrill and unappealing vocally.

Brian Kulick, direction is odd as he has his actors sit on a row of chairs at the back of the stage, when not performing, drinking from water bottles and crossing their legs. He also has the actors dressed in contemporary clothing, which they change onstage to tunics denoting their religions. I did love the costumes by Anita Yavich. The production’s designs also is a little heavy handed with Tony Straiges’s wall sized photograph of a bombed out street in Syria. Considering in 1192, there peace between the city’s Muslim, Christian and Jewish populations.

Despite some of it’s flaws Nathan the Wise is a well thought out play with a wonderful lead and supporting actors and is worth the price of admission.

Suzanna BowlingJune 22, 2022
Read More
Scroll for more
Tap
Hoarding is the Subject of Keep
2016 Tony Honors for Excellence in the Theatre