The undie-rock, comedy-pop duo The Skivvies, will be playing Feinstein’s/ 54 Below January 14th and 20th.  The Skivvies don’t just strip down their musical arrangements, they literally strip down to their underwear to perform their distinctive mashups and eccentric originals for cello and ukulele, with touches of glockenspiel, melodica, and a surprising array of under-used instruments. Award-winning singer-actors Lauren Molina (Desperate Measures, Marry Me a Little, Sweeney Todd, Rock of Ages) and Nick Cearley (All Shook Up) became YouTube sensations as The Skivvies, with living room videos that displayed their powerful harmonies as well as their powerful abs. Those clips led to live shows with special guest stars who will strip down and rock out. 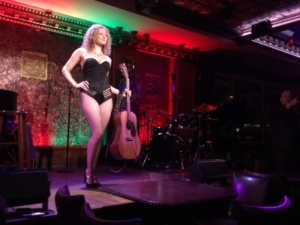 T2C had a chance to talk to Lauren Molina who is hysterically winning hearts at The York Theatre in Desperate Measures, one of my best picks for 2017. Lauren lets you in on her secrets as well as wishes T2C a Merry Christmas.

Suzanna BowlingDecember 27, 2021
Read More
Scroll for more
Tap
It’s a Wonderful Life (The Radio Play) When I Get to Watch This and A Christmas Story (The Musical) All in One Week
Rudolph’s The Red-Hosed Reindeer – A Pointedly Political Romp