Falling in Love Again With Arthur Miller and All My Sons 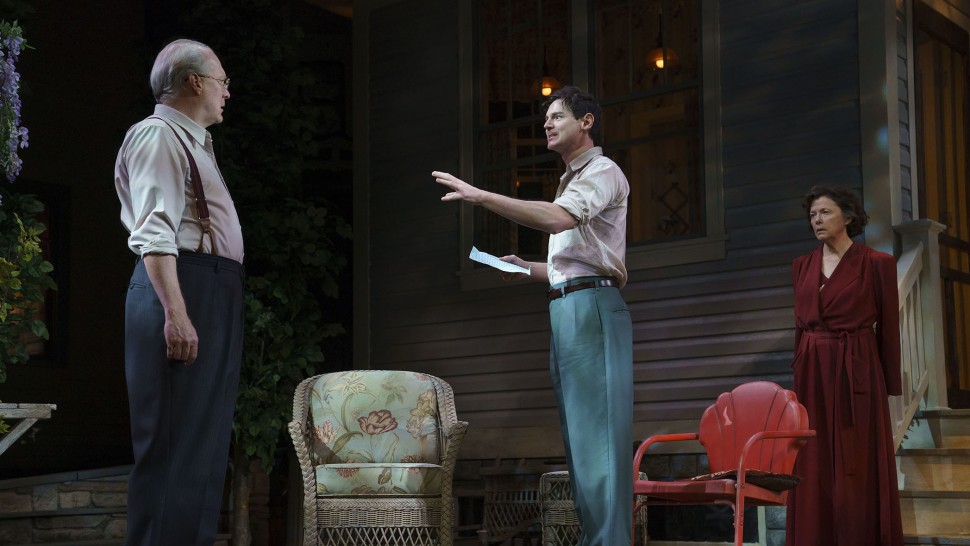 Falling in Love Again With Arthur Miller and All My Sons

If I won the lottery, I would buy tickets for everybody to see Roundabout’s revival of Arthur Miller’s All My Sons, at the American Airlines Theatre. This devastating story of the loss of the American dream in the capable hands of director Jack O’Brien hits home and shows how generational upbringing dictates our decisions, our morality, and the fate of the world.

“We used to shoot a man who acted like a dog, but honor was real there, you were protecting something. But here? This is the land of the great big dogs, you don’t love a man here, you eat him! That’s the principle; the only one we live by.” Chris

Written in 1947, Miller’s work is like watching several little playlets in one. Each character is so fleshed out, they become a play within, including the minor characters. Miller’s craft and language is so simple, yet so complex. As the show goes on, each person’s layers are peeled off, until they are left raw and oozing. Miller gives clues along the way that if you are really listening when the bigger picture is reveled, there is no way not to be touched.

We first meet Joe Keller (the incomparable Tracy Letts), a self-made businessman, his neighbor Frank (Nehal Joshi), who at Joe’s wife’s, Kate’s (Annette Benning) request, has been trying to figure out the horoscope of the Kellers’ missing son, Larry, who disappeared three years earlier, while serving our country during World War II. Kate desperately believes that Larry is still alive. Their other son, Chris (Benjamin Walker), has brought the girl-next-door, Ann Deever (Francesca Carpanni), back home to marry him. He knows his mother will not take this well as she is also his brother’s girlfriend. To make matters more complicated, both Joe and Ann’s father, Steve Deever, were sent to prison for selling cracked cylinder heads to the Air Force, causing the deaths of 21 pilots in plane crashes. Joe has been exonerated of the crime; Steve is still in prison.

“I know you’re no worse than other men, but I thought you were better. I never saw you as a man…I saw you as my father.” Chris to Joe

Chris, an idealist, is dealing with survivors’ guilt, as he lost all his men. When George (Hampton Fluker), Ann’s brother, calls saying he is arriving, their next-door neighbor, Sue (Chinasa Ogbuagu) reveals to Ann that everyone on the block thinks Joe is still guilty. When George arrives, he insists his sister Ann cannot marry Chris because he set their father up. At first, Joe denies this, but when Chris learns the truth, he flees. When he returns, Ann reveals a letter from Larry, that seals all their fates.

“Your brother’s alive, darling, because if he’s dead, your father killed him. Do you understand me?” Kate to Chris

The scenes between Tracy Letts and Benjamin Walker are riveting. Letts understands how to make a character so real and Walker is the embodiment of a young Jimmy Stewart. We feel for them both as they are stuck in their own generational versions of hell. Letts’ denial is masked by his flirtatious manner, but we see his prison once we open our eyes to what lies beneath his demeanor. Annette Benning’s portrayal is stripped-down strength. Again, what this production does best is show us looks can be deceiving. But it is Walker, whose idealistic torture, want of something more, and loss of innocents affects us. He is this country struggling for its humanity.

Scenic designer Douglas W. Schmidt’s depiction of the Keller’s backyard, lush with greenery but torn apart adds to the overall picture, as does the lighting by Natasha Katz. Jeff Sugg’s video and projection designs of planes falling out of the sky, lighting and static, are haunting.

Denial, seeing beyond what is in front of our eyes, and being told lies in the sweetest of voices is difficult to discern. Miller’s words and O’Brien’s production is asking us to do just that. It is also showing us that our upbringing causes us to sometimes make discussions that may be disastrous, and we all live in prisons of our own making. This is a play that gets more powerful the older you are, and this production is not to be missed.

All My Sons:Roundabout: American Airlines Theatre