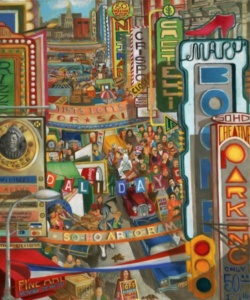 Robert Cenedella was born in Milford, Massachusetts, in 1940. He received his formal education from The High School of Music & Art in New York and from The Art Students League of New York. In 1988, he inherited the George Grosz Chair at The League when he was invited to teach his Life Drawing Class and a Painting Workshop. He presently teaches three classes at The League.

Following a definite tradition in art, like Brueghel, Daumier, Hogarth, and Grosz before him, Cenedella has devoted his art to chronicling the changing rituals and myths of society in contemporary America.

In the last 30 years, Cenedella has amassed considerable international praise as well as inclusion in numerous public and private collections. His commissions include works for the famed Bacardi International and ABSOLUT Vodka, a theater piece for actor Tony Randall, and two murals of historical significance for Le Cirque 2000 Restaurants in New York and Mexico City.

Cenedella’s art and life was the subject of a book, “The American Artist as Satirist,” by M. Kay Flavell.

“Art Bastard”, a historical documentary film on his life and work was released in the spring of 2016 by Concannon Productions to critical acclaim. It was directed by the acclaimed writer and director Victor Kanefsky, produced by Chris T. Concannon, and edited by Jim MacDonald.

This exhibition marks the start of a series of special events to announce the Cornelia Street Café’s Underground performance space attaining its new 501 c3 status.