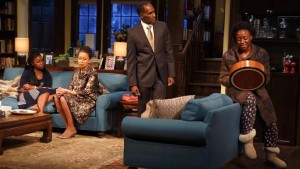 With the wants so strong and personal needs clashing with the wants, Danai Gurira’s new play, Familiar is a comedy/drama born out of secrets revealed. When the action takes place at a wedding between Zimbabwean-American bride in Minnesota and a Caucasian boy, feathers are sure to fly and fly they do. Opening tonight at Playwrights Horizons, this deeply funny play is sure to affect everyone who sees it in a profound way. 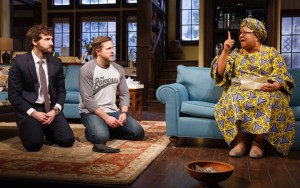 We begin at the home of Donald (Harold Surratt) and Marvelous Chinyaramwira (Tamara Tunie) Zimbabwe immigrants who escaped their country’s civil war to achieve the “American Dream.” Donald, a partner in a law firm, keeps replacing a picture on the wall, with one of Africa, as he settles to watch a football game. Marvelous a biochemist is a no nonsense take charge kind of person who is readying the food for the rehearsal dinner for their eldest daughter, also a lawyer, Tendi (Roslyn Ruff). As her husband takes down the well planned picture for their homeland, she makes him put it back. Tendi’s husband to be Chris (Joby Earle) is white and the symbol to Marvelous of belonging. Their youngest daughter, Nyasha (Ito Aghayere), has just returned back from a trip to her ancestral home. Wanting to embrace more of her heritage she wonders and questions at length why this part of who they are, has been ignored. It is clear mother and daughter are cut from different cloths. Nyasha, an aspiring singer-songwriter and feng shui consultant is full of life and not the one her mother wants for her. Marvelous’s remarks to her daughter are cutting, painful and sting the sensitive girl, who tries to not care.

Marvelous’s sister Margaret (Melanie Nicholls-King), also escaped and is living the “dream,” but for her it is a saddened affair, that she nurses with glass after glass of wine. Tendi, Donald and Margaret have a surprise that makes Marvelous furious when Chris brings Marvelous’s older sister, Anne, (Myra Lucretia Taylor) to perform the Zimbabwean “bride price” ceremony. Anne enters stating “I am here to bless our daughter.” The ceremony becomes the undoing for all involved. Anne has come to do the ceremony to exact funds for a dirt-poor family home. To make matters worse, Chris is not allowed to speak for himself, so he enlists his brother Brad (Joe Tippett) into the negotiations. When Marvelous refuses to go along with Anne’s schemes, Anne devolves a secret that could tear everybody apart. Each of these characters has a secret that is raw and festering. Their wants all conflict with the needs of who each thought they were and in the end they must find a way to survive this breakage or wither away.

The cast lead by Ms. Tunie, is excellent. Each shines in their own way, bringing the complexity of emotions to the forefront, so we know who each of them are. The direction by Rebecca Taichman, is flawless. She has directed her actors to a combined ensemble. They are a family. The set by Clint Ramos is the only part of the play, that even though there is an emotional earthquake happening, will not fall down.

Ms. Gurira, is not only an accomplished actress, but now this is the year in which her plays are and will be heralded as the best of the season. On Sunday Eclipsed, her play on Broadway that was a transfer from a successful run at The Public, opens. She is making history with Eclipsed, as the first Broadway production to be written, directed and entirely cast with black women. I can see when the nominations come out how Ms. Gurira, will be competing with herself, because Familiar is one of the best plays of the year. It is touching, heartfelt, deals with displacement, cultural identity, loss, the struggle between a mother and her daughter, the feeling of not being good enough, longing for what is past, war, poverty and human connection. In the end we connect with these very human characters and relate.

This play is a must see and definitely on my list for Best Play!