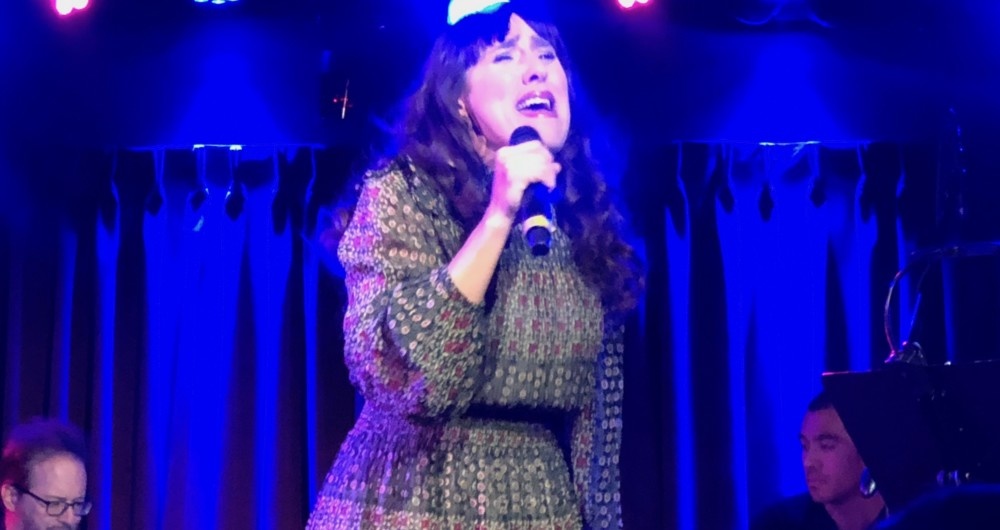 Farah Alvin took the stage last night at The Green Room 42. Her show was called On Vinyl and brought back the 70’s vibe, where the groove was strong and the songs showcased the writers who were mostly women.

Three Dog Night’s “Eli’s Coming” showed what a rock goddess Ms. Alvin is. Her powerful vocals brought down the house and it was only the second song.

Showing her softer side Phoebe Snow’s “The Poetry Man”, a swinging song by Elton John, which I had never heard “Take Me to the Pilot” and The Commodore’s “Easy” soothed the savage beast.

Talking about her time in the Burt Bacharach Hal David musical The Look of Love, she explained how Ann Reinking had her and her fellow pit singer act as if they were in an elevator and crouch down and rise at the opening of the second act and the crouch back down. She ripped through “Anyone Who Had a Heart” breaking ours.

Since she was in Saturday Night Fever on Broadway Farah bring back the disce era and female power Farah showed whose “The Boss” in Diana Ross’s hit.

Explaining how we have been taught to suppress our feelings Farah demonstrated with Melissa Manchester’s “Don’t Cry Out Loud”. I have never been a fan of this song, but in Alvin’s comedic, then touching version, I did. Also she held a note longer than I have heard anyone and it never lost it’s power or residence. That is the mark of an extraordinary singer.

Ms. Alvin was backed by some wonderful artist starting with musical director, guitarist, pianist, arranger the amazing Michael Holland. In the 70’s you needed back-up singers and Kristin Dausch and Jennie Bruen hot all the right notes. Her band finished off with Brandon Wong on drums and Owen Yost on bass guitar.

Linda Ronstadt’s “Long Long Time” started a theme on break ups. A mash up of Carley Simon’s “Your So Vain”, Ronstadt’s “You’re No Good” and Carole King’s “It’s Too Late” completed the journey

A eye opening look at ads from the era, lead to Janis Ian’s introspective “At Seventeen”, but Farah took back her power with Gladys Knight & The Pips “If I Were Your Woman”.

Farah’s encore was Stevie Wonder’s uplifting “As”. After seeing this show all I could think of was the only one who could compete with Adrienne Warren sensational performance in Tina: The Tina Turner Musical and give her a run for her money is Farah Alvin. That’s how phenomenal Ms. Alvin is.

The show was marvelously co-conceived by Marc Tuminilli

For those who do not know who Farah Alvin is she earned her Equity card when she performed in the Los Angeles premiere of Fame: The Musical. Three weeks after moving to New York, she was in the musical A Christmas Carol at Madison Square Garden. Alvin’s first Broadway theatre credit came was in the revival of the musical Grease. She followed that with Broadway productions of Saturday Night Fever, Nine, The Look of Love and It Shoulda Been You.

Alvin appeared off Broadway in The Last Smoker In America, I Love You Because, Date of a Lifetime, Cam Jansen and If You Give a Mouse a Cookie and Other Story Books and the revival of Kuni-Leml.

She won the NYMF Outstanding Actor Award for her performance in Date of a Lifetime. Alvin was nominated for a Drama Desk Award for Outstanding Featured Actress in a Musical, for her role in The Marvelous Wonderettes. With her cast mates the Helen Hayes Award for Best Ensemble for Ricky Ian Gordon’s Sycamore Trees.

This is seriously a singer who not only belts the notes out of the rafters with her glorious sound but gives each lyric meaning. She is a singers singer and should not be missed. Check The Green Room 42’s site to see her return.