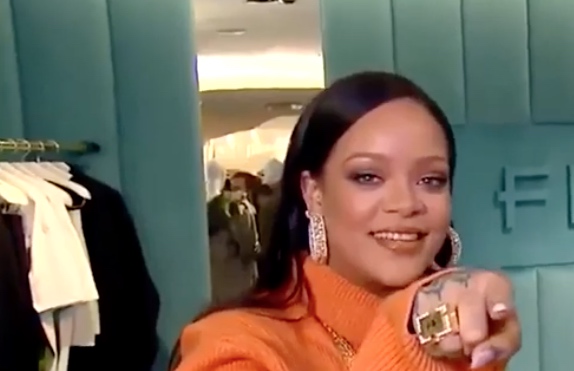 Siriano’s show had sculptured over the top gowns, cropped blazers and flare trousers in eggplant, with rainbow fringe, architectural mermaid gowns in a sparkly silver crystal and black print, boxy waists, wide-brim hats, velvets in blush and fuchsia. The cropped jackets and flare trousers in eggplant with pops of bright green completed the collection. Heidi Klum was in the audience, but all I could think of was Billy Porter and Jordan Roth. Siriano is the man behind Billy Porter’s tuxedo gown from last year’s Oscars. He also dressed Lizzo, Demi Lovato and Yola for the Grammys.

Here you can catch a glimpse of the Rag and Bone show.

For Pamella Roland click here and for Christian Siriano click here. Vogue truly has the best coverage this year!

Rihanna, singer-turned-fashion designer hosted a party in honor of her new Fenty pop-up shop at Bergdorf Goodman. Crowds of adoring fans, lined up long before the doors officially opened at 9pm.

Rihanna showed up promptly at 9pm in a bright orange classic knit turtleneck dress with a matching parka coat worn overtop, all from her Fenty collection. You can get the dress at Berdorffs for $960.00