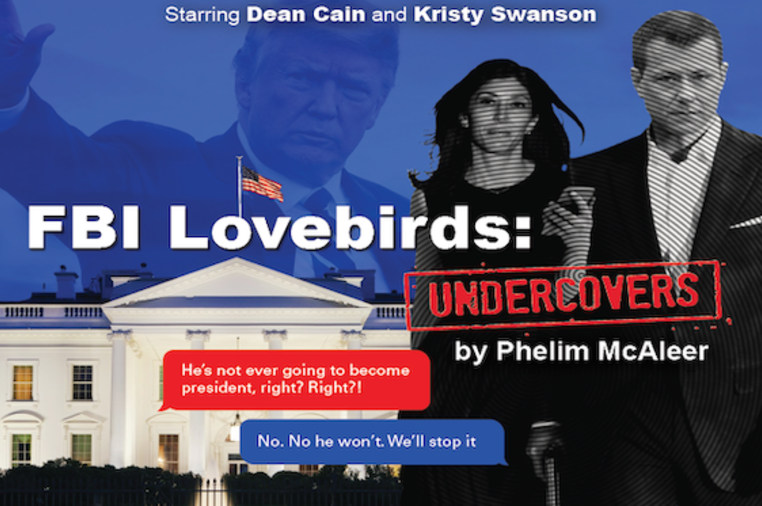 Phelim McAleer’s FBI Lovebirds: UnderCovers was to be a play/film that exposed how top FBI operatives tried to destroy President Trump’s campaign and his presidency by starting the “Russia Collusion” investigation. As the play was being done, it was to be filmed before a live audience in Washington DC and then released online for the world to see.

Dean Cain (Lois & Clark: The New Adventures of Superman) was to play Peter Strzok. Strzok is the FBI agent who started the investigation while pledging to his FBI lover Lisa Page to be played by Kristy Swanson (Buffy The Vampire Slayer film). They stated that they were going to prevent Trump from becoming president.

The Washington D.C. theater has canceled the production due to “threats of violence.”

McAleer, has stated “that the show will go on despite the left’s attempts to sabotage it by forcing the venue’s withdrawal so close to the event date. We will get a venue. The staged reading will go ahead. It will be filmed and released online and everyone will get to see the truth about how the upper echelons of the FBI tried to subvert democracy. This censorship will not succeed.”

So it looks like this death threat was taken down, that is a good thing. But the person who posted the Threat (sponson) has NOT been banned.

Swanson retweeted the death threat since twitter has refused to take it down. After that Swanson tweeted “So it looks like this death threat was taken down, that is a good thing. But the person who posted the Threat… has NOT been banned”.

The theatre sent a e-mails to the producers stating “We have an institutional responsibility to protect the safety of our staff, patrons, rental guests, and community. In the best interests of all involved, we must ask that you find another venue for your event.”

As of today, McAleer’s Indiegogo page for the production, which did not have updated information about the venue change, had raised $38,877, about 40% of its $95,000 goal.