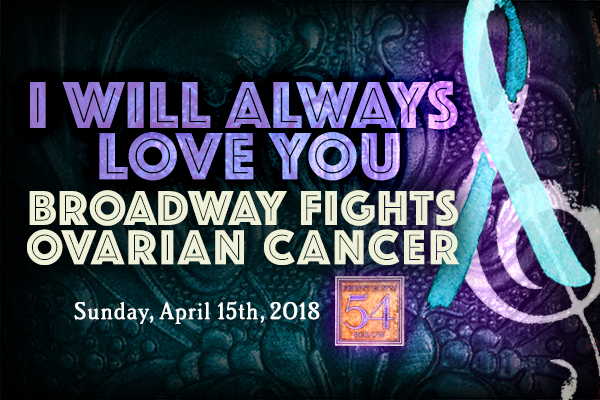 Suzanna Bowling
Last year’s one-night-only benefit concert, True Colors: Broadway Fights Ovarian Cancer, raised over $14,000 for Discovery to Cure. Nick Cartell (Jean Valjean in the current National Tour of Les Misérables) did this in honor of his mother who lost her battle with ovarian cancer in June. Now Nick and his wife, Christine Cartell, are bringing back the event in the hopes that someday soon no one will have to fight this terrible disease any longer.
The Cartells have once again teamed with Director Jim Brigman and Music Director Drew Wutke, and the evening will again be hosted by Ben Rappaport (ABC’s For The People, Fiddler on the Roof) and Christine Cartell (The Blacklist, Person of Interest) as they bring to you a night of Broadway favorites singing songs composed and written by women.

Feinstein’s/54 , Broadway’s Supper Club, presents I Will Always Love You: Broadway Fights Ovarian Cancer on Sunday, April 15, 2018 at 6:30pm. Bringing together some of the best of Broadway for an unforgettable night of music to raise money to find a cure for and celebrate those battling Ovarian Cancer. All proceeds from this event will be going to Discovery to Cure, part of the Yale School of Medicine, dedicated to advancing the prevention, early detection and treatment of women’s reproductive cancers. http://discoverytocure.yale.edu/

PERFORMERS SCHEDULED TO APPEAR (subject to change):
Ali Ewoldt (The Phantom of the Opera, The King and I, Les Misérables)
Nick Cartell (Les Misérables, Paramour, The Phantom of the Opera)
Allison Luff (Escape to Margaritaville, Wicked, Matilda)
& Matt Magnusson (Breaking Through, Home Street Home, Grease; Toronto)
Nic Rouleau (The Book of Mormon, Unbreakable Kimmy Schmidt)
Phoenix Best (Dear Evan Hansen, Les Misérables, The Color Purple)
Natalie Charlé Ellis (School of Rock, Les Misérables, Forbidden Broadway: Alive & Kicking)
Krystina Alabado (American Psycho, Evita)
& Robert Lenzi (Tuck Everlasting, South Pacific)
Tracy Jai Edwards (Hairspray, Legally Blonde, Ruthless)
Derrick Davis (The Phantom of the Opera, The Lion King, Dreamgirls)
Katie Travis (The Phantom of the Opera)
Megan Kane (For The People, Play Like a Winner)
Tessa Faye (Good News, Elf, The Electric Company)
Jenna O’Gara (Lead Vocalist of 80’s Band Jessie’s Girl)
Jacey Powers (Falling, The Shanghai Gesture, Our Town)
The Broadway Boys and more
54 Below, Broadway’s Supper Club, and Michael Feinstein, one of the world’s great musical artists, have united to give New York an unparalleled destinationfor entertainment and dining. Feinstein’s/54 Below, Broadway’s Supper Club & Private Event Destination, is the performance venue in the grand tradition ofNew York City nightlife. A few blocks from the heart of Times Square and just below the legendary Studio 54, Feinstein’s/54 Below is a classically designed state-of-the art nightclub in the theatre district that hosts audiences with warmth and style. Feinstein’s/54 Below presents iconic and rising stars from the worlds of Broadway and popular music. The venue provides a food and beverage menu from early evening through the wee hours of the morning that is worthy of the world-class entertainment on the stage. In their description of the venue, The New York Times writes Feinstein’s/54 Below “has the intimacy of a large living room with unimpeded views and impeccable sound; there is not a bad seat. Its sultry after-hours ambience is enhanced by brocade- patterned wall panels planted with orange-shaded lanterns. And the atmosphere is warmer and sexier than in Manhattan’s other major supper clubs.” Located at 254 West 54th Street, Feinstein’s/54 Below features up to three shows nightly with cover charges ranging from $15-$105.www.54Below.com/Feinsteins
I Will Always Love You: Broadway Fights Ovarian Cancer: Feinstein’s/54 Below (254 West 54th Street) Sunday, April 15, 2018 at 6:30pm. Tickets range from $155–$295 and include an exclusive two-course meal, standard open bar, and the evening’s entertainment. Portion of your ticket may be tax deductible. Tickets and information are available at www.54Below.com. Tickets on the day of performance after 4:00pm are only available by calling (646) 476-3551.
Related ItemsAli EwoldtBen RappaportBroadwayChristine CartellFeinstein’s/54NewNick CartellOvarian Cancer
Broadway