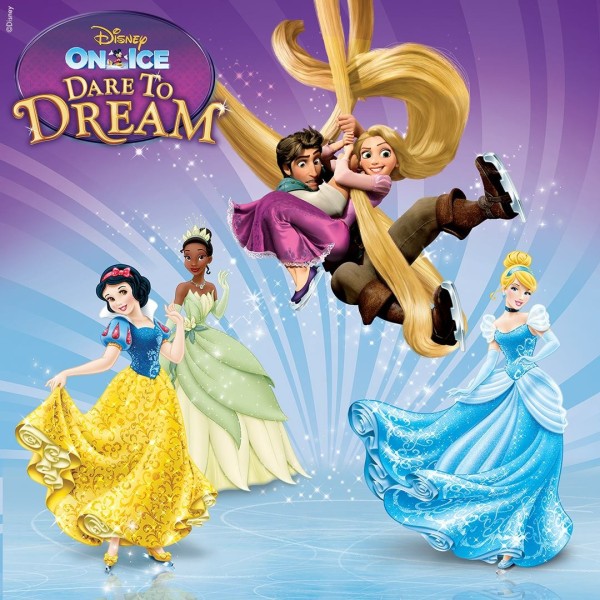 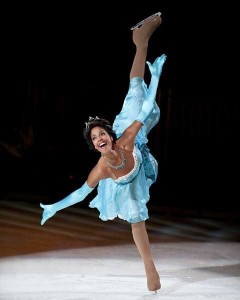 Eleanor Roosevelt once notably stated “The future belongs to those who believe in the beauty of their dreams.” I believe it is with a similar fortitude that Feld Entertainment now presents Disney on Ice Dare to Dream!  Just beginning its limited, nine-performance engagement at Chicago’s United Center, the cast of Dream is a who’s who of classic and contemporary Disney heroines, interconnected by their aspirational imaginings. It doesn’t matter if you don’t know a triple axel from a chasse, or a kilian from a lutz, the never-ending athletic energy of the skaters, the lavishness of the parade of costumes, the pounding rhythmic beats of a medley of musical classics, or the eye-popping staging, Disney on Ice Dare to Dream! is a winner.  The production team is lead by real life sisters, Nicole and Juliette Feld, who partnered with director Patty Vincent  and creative director and writer Jerry Bilik. This quartet have forged a family friendly showcase featuring four Disney women who’ve all triumphantly chased their dreams. The fancy footwork on display, choreographed by Cindy Stuart, will both amaze and astound as it simultaneously amuses. Principal Skaters Victoria Black, Veronika Grigoreva, Brittany Vise, Sergey Kulbach, Joseph Jacobsen and James Black lead a troupe of 18 male and 21 female cast members from five different countries, all swathed in luxurious costumes designed by Ivan Ingermann. I was told over 250,000 Swarovski crystal rhinestones adorn the 1,068 custom-made costumes for this show. Twenty-four artists and craftsmen labored to create the set design pieces orchestrated from the talented mind of Stan Meyer. Speaking of orchestrations, music director David Killinger worked overtime to contain over 20 classic songs in a brisk 90 minute showcase. A bold and enjoyable extravaganza, Feld Entertainment’s Disney on Ice presents Dare to Dream! successfully demonstrated there is something here for every level of Disney fan. 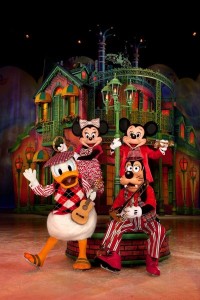 The show began with Master of Ceremonies, Mickey Mouse, partnered with Minnie and their friends Goofy and Donald, introducing different vignettes of the showcase. “Horary for dreams” cheered Mickey Mouse, waving graciously to the crowds, as an impressive array of ice-dancers took us straight to the bayous of Louisiana. “Dreams really do come true in New Orleans” promised Minnie Mouse as Princess Tiana and an ensemble of over twenty skaters performed a jazz-fueled, New Orleans flavored opener.  Set in her restaurant, Tiana’s, and featuring many of the familiar faces from The Princess and the Frog, the soulful soundtrack included Down in New Orleans, Dig a Little Deeper and When The Saints Come Marching In.  This initial segment was a toe-tapping howler of a good time.  Energetic, frenetic, and nonstop. From contemporary to classic, Snow White’s story was presented next. Launched by the Evil Queen asking an impressive, seven-foot tall, Magic Mirror, the age old question, “Who is the fairest of them all?” Distraught she isn’t the answer, the Queen sends her Huntsman into the woods to finish off the fair sovereign. Aided by the comically charming Seven Dwarfs, Grumpy, Sleepy, Happy, Doc, Bashful, Sneezy and everyone’s favorite, Dopey, our heroine escaped her fate. That is until an old beggar woman dropped by with a basket of apples. The notorious poison apple. Holding it up to the audience, Snow sheepishly asked “should I take a bite?”  Ignoring the cries of hundreds of children shouting “NO!” in unison, she was quickly cast under its fateful spell, thankfully broken by the kiss from a handsome prince.  This segment concluded with some truly lovely and impressive lifts, set to a medley of With a Smile and a Song, Heigh-Ho and Some Day My Prince Will Come. 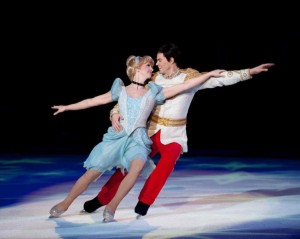 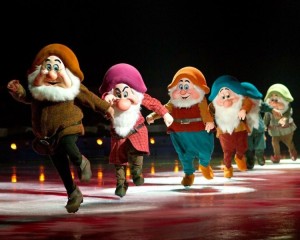 Goofy returned to the rink to set up the next story. Finding a single glass slipper resting gracefully on a pillow, it was time for “probably one of the most famous stories ever” he chided. Cinderella emerged with her Stepmother and selfish stepsisters, Anastasia and Drizella, mostly played for comic relief, gliding in behind them. Invited to the Royal Ball, Cinderella had her hopes dashed by her mean-spirited siblings, viciously tearing away at the gown her rodent friends had crafted for her. Saving the day, her Fairy Godmother, with a  little help from the kids in the audience.  Stumbling over her signature line, dozens of children reminded her it was as simple as chanting “Bibbidi-Bobbidi-Boo.” Gus, Jaq, Susie and Perla were transformed into horsemen and a pumpkin into a golden carriage. Some of the most impressive skating of the evening was demonstrated by Cinderella  and her Prince Charming, much to the delight of the skating aficionados sitting within earshot. The layback spin certainly captivated. Not even the stroke of midnight could take away from their enchanting moves, set to the refrains of A Dream Is a Wish Your Hearts Makes and So This Is Love. 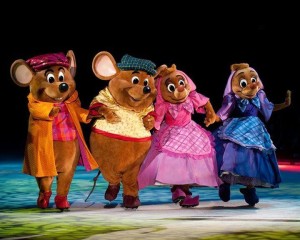 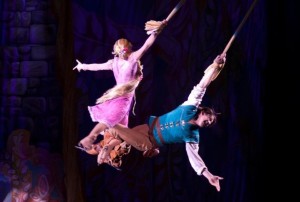 Not to be outdone, the fourth and most elaborately “tangled” tale was that of Rapunzel. Kidnapped as a baby by Mother Gothel, she lived her life in a tower, not knowing she was a missing princess.  With the help of a dashing new friend, Flynn Rider, Rapunzel wished to participate in the annual Floating Lantern Festival which just so happened to occur every year on her birthday.  Doubling for her long hair, golden fabric descended from the ceiling of the United Center. An impressive aerial act, with high flying skaters lifted 25 feet about the ice, dazzled. With faithful friend Pascal, the chameleon, by her side and armed with her trusty frying pan as a weapon, Rapunzel and Flynn set out on their adventure.  The Snuggly Ducklings Thugs and Maximus the horse charmed all as well.  For an event so geared around Princesses, any boy will thoroughly enjoy the “Mission Impossible” entrance of Rider to the proceedings. The set finished with an impressive couples free skate, full of enough overhead platter lifts and tricks to both mystify and inspire. I See The Light, indeed. The finale reunited the four princesses with nine additional noblewomen and their respective princes, including Belle, Mulan, and Sleeping Beauty’s Aurora. The Little Mermaid’s Ariel and Eric  and Jasmine and Aladdin garnered the largest cheers from the audience on the night I attended. With fireworks exploding from the backdrop set, the triumphant dreamers took their final bows before gliding away for the evening. 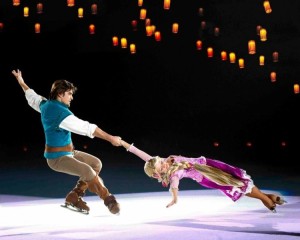 Feld Entertainment once again proved itself as an industry leader in the creation of endearing live family entertainment. Capitalizing on the lexicon of Disney’s most hopeful characters, there was something on display for everyone to relish. In the audience, a sea of little girls, outfitted as their favorite regal monarchs, flocked to the numerous concession and novelty stands by the evening’s end. Make certain to bring your credit card as well as your perseverance. The crowded lines were long and slow moving, but the merriment of the show proved delightful, empowering and most importantly, real.  The enchantment of Disney on Ice presents Dare to Dream delivered! 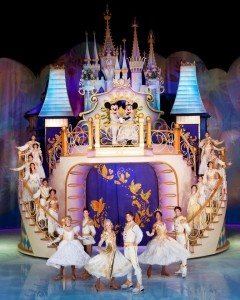 Feld Entertainment’s Disney on Ice presents Dare to Dream is not playing through September 11, 2016 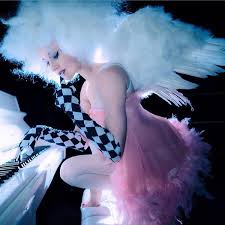 How Are We Coping With Self Isolation: Insight From Around the Country And The World With Katy Mikelle