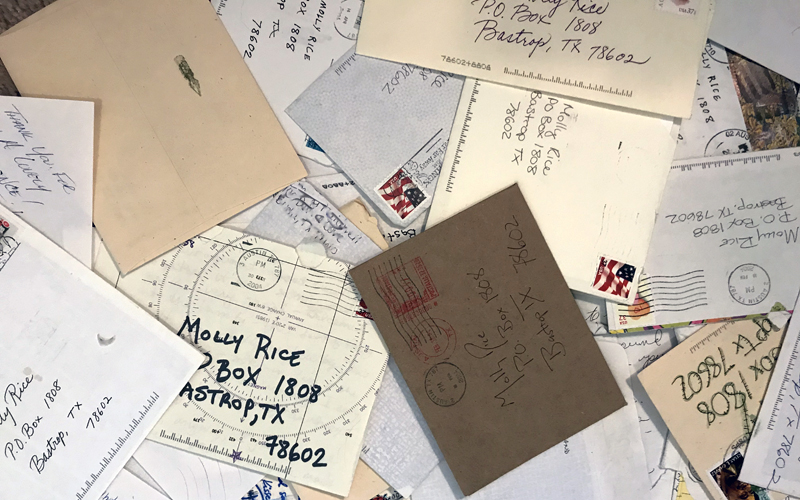 A collective of 13 theater groups and artists from across the globe will join forces for Post Theatrical, a festival of works that use mail as a theatrical medium. The festival, which launches in February and will run through June, 2021, features a diverse range of works that use the medium of mail in a broad range of ways.

Post Theatrical was conceived and is coordinated by Pittsburgh’s RealTime Interventions. Tickets range from Pay-What-You-Can to $75. Complete details on individual projects within the festival are compiled and continually updated at www.PostTheatrical.org.

According to RealTime Interventions Artistic Directors Molly Rice and Rusty Thelin, “New ideas don’t happen in a vacuum. As RealTime started to plan a mail-based production for this spring, we discovered that other experimental theatermakers were becoming inspired by older, analog forms of communication like the mail. RealTime offered to create a central hub to amplify this new work, all of which uses the mail as an organizing principle. The goals of POST THEATRICAL are to support participating artists in making new work both during this time and in response to it. Participants also have a shared goal to reach out to and work with groups and individuals -— either as partners or as audiences — who may not have had easy access to live theater (or even virtual plays) in normal circumstances, but who are connected by the intricate web of postal routes extending across this country and beyond. The mail service arose from a need to communicate, like theater; and like theater, it’s survived all manner of disease and disaster. This Spring, POST THEATRICAL will be celebrating that resilience.

A Tunnel Year
Karinne Keithley Syers (Amherst, MA)
A play built from a few years’ worth of interrupted thoughts crammed into one-line scenes voiced by animals. It asks: Did I escape? Or am I lost? Originally conceived as a walk-through comic book paired with a live radio play at The Chocolate Factory Theater in Queens, NY, it now changes scale to become a book with an audio link to a recording of the 2016 live radio play.

Journey Of A Dream
Irina Kruzhilina (New York, NY)
A virtual global performance which connects UN representatives and the audiences to the aspirations of youth. Children from around the globe are asked to express their dreams and obstacles via digital and photographic storytelling. The collective image of their dreams will form a postcard which will be delivered to the UN representatives making them accountable for making the kids’ dreams come true.

The Mailbox
Tiny Box Theater/Ya Chin Chang (New York, NY / Hong Kong)
Tiny Box Theater presents a new interactive theatrical piece in collaboration with visual artist Ya Chin Chang. What happens when all of the mailboxes in the world disappear overnight? The artists will post drawings and narrative to participants who will pick up the story’s trail by initiating a response. Audience submissions will affect the conclusion which will be revealed in an online finale event on April 1.

Spite & Malice
Chelsea Sutton & Slipped Beyond Productions (Los Angeles, CA)
A fantastical branching narrative that utilizes playing cards, found objects, new media, and mail-based interaction to lead you through a tangled correspondence between the King, the Queen, and Jack, who are racing to win a never-ending card game. You’re part of the game now. Good luck.

Party Line
Scott Adkins & Let’s Make a Theatre Company (New York, NY)
One day your phone rings and you hear two strangers talking on the other end. They can’t hear you but you can hear everything they are saying. Playwright Scott Adkins, missing the joy of overheard conversations, brings you a series of eight everyday phone calls to connect with random fictional people. With your ticket, you will receive an SASE to send a note or questions to your favorite character in the series. Every audience member who writes will get a response from that character.

As Yet To Be Determined
Cooperative Arts and Humanities High School (New Haven, CT)
A year into being forced to do remote learning, a high school drama class tries to reimagine what the theatre experience can become outside of the physical space. Utilizing the tactile and ancient medium of the post, they will attempt to recreate what makes theatre special to them. How can they leverage available technology, can they capture their voices in this new form, and who is the audience they want to reach? It is as yet to be determined.

Dream/Home
New Georges/ Emerie Snyder (New York, NY)
An object-based theatrical exploration of your own home and surroundings, led by a playfully mysterious map that connects you to others across the country, inviting us all to look at the world a bit differently. You receive a package from an artist far away…oh look, there’s a map inside… maybe a few clues…might as well see where they lead?

The Community Forest
Melisa Tien (New York, NY)
A mail-based work that invites recipients to participate in plant cultivation and interaction with a living text as a reflection on change, growth, legacy, and impermanence.

Capricorn 29
Alex Hare (New York, NY)
A digital musical experience loosely inspired by the dystopian 1976 cult film Logan’s Run, set in a society that kills people when they turn 30. After receiving that fateful birthday card in the mail, you decide to escape, and the ensuing journey leads not only to frozen caves and violent robots, but also to a radical questioning of the self and the world that shaped you. CAPRICORN 29 reimagines the not-quite-midlife crisis as an opportunity to embrace the terror and joy of blowing up your life.

The Birth of Paper
RealTime Interventions (Pittsburgh, PA)
A live/postal experience that physically connects humans in Pittsburgh humans in Beirut, Lebanon. Beirut residents living the fallout of the 2020 explosion will receive gifts in real time designed by Pittsburgh makers from Handmade Arcade, Pittsburgh’s largest independent maker community. A celebration of paper, ink, and the postal service as an ancient, global technology of connection. In collaboration with City of Asylum.

Deliverence
Demaskus Theater Collective (Pittsburgh, PA)
An interactive above ground journey to personal freedom through community correspondence and connectivity. Based upon the life of Mary Fields (known also as “Black Mary”), the first Black mail carrier, participants will receive a satchel of items in the mail that evoke remembrance and rebellion. Journal entries received from participants will be pieced together to create a live virtual performance during Juneteenth 2021. Deemed “one of the freest souls ever to draw a breath, or a .38,” the Star Route Stagecoach carrier Black Mary will be remembered through the performance of the works created in community. Actors will cultivate meaningful experiences for each participant through daily text messages and weekly challenges meant to guide each participant along their personal path to liberation.

Ongoing:
Mondays in the Club With Lance
Lance Horne (New York, NY)
A collective born from gathering each week to sing around a piano turns instead to a medium as old as America and can reach much farther than any footlight.