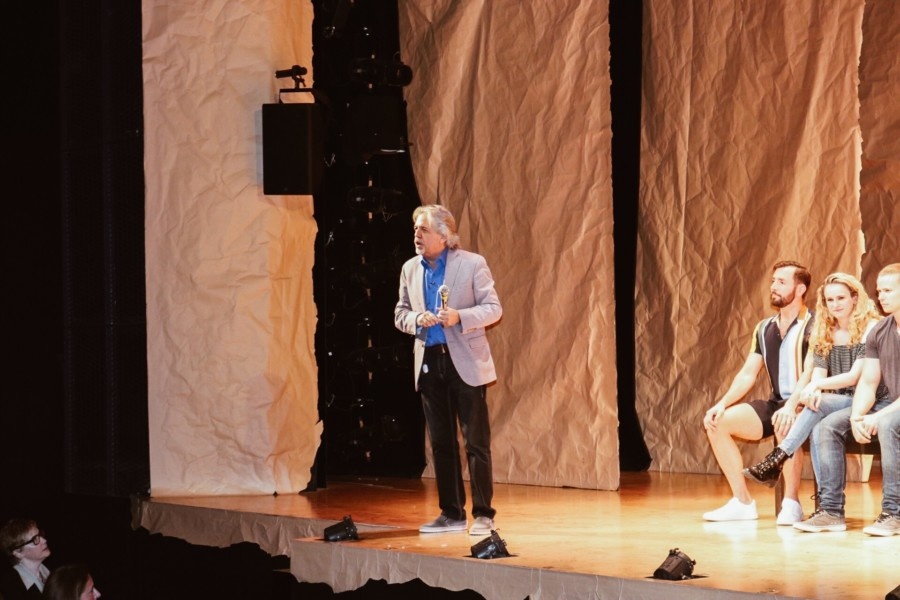 Every seat in the theater was donated to allow refugees from all parts of the globe to see the show, and Fiddler celebrated their unique stories and journeys through this poignant and timely production with an afternoon and evening full of events.

The show partnered with the non-profit organization Reboot, a premier Jewish arts and culture organization, to further enhance its World Refugee Day celebration by involving some of the artists they work with to help commemorate the event.

Photographer Gillian Laub and illustrator/journalist Christopher Noxon photographed and live-sketched a select group of refugee attendees to document an extraordinary array of stories, journeys and experiences. Many refugees who attended the performance answered a series of questions written by Nicola Behrman about their experiences of having left their homelands. Fiddler will actively be curating these interviews for a larger initiative around this conversation.

The theater opened to its guests at 5:00 PM, where refreshments and concessions were made complimentary to all in attendance.  There, attendees also explored an installation in the theater’s lobby of After Anatevka: Jewish Immigration and American Reaction, an exhibition curated by author & Yiddish scholar Eddy Portnoy for the YIVO Institute for Jewish Research that reveals the Yiddish response to 1920s-era restrictions placed on Jewish immigrants.

Immediately following the evening performance, Fiddler hosted a post-show town hall event allowing this diverse community of refugees (and the leaders of the organizations that work to protect their rights) the opportunity to connect with one another in a safe and celebratory space. The post-show talk was moderated by Luis A. Miranda Jr., an activist, educator and businessman who led a conversation with the hundreds of refugees in the theater, many of whom shared their own Fiddler Story.

The complete list of organizations who helped coordinate the group of refugees included:

Fiddler on the Roof, in Yiddish with English Supertitles, had never been staged in the United States until this production was presented at NYTF in 2018. The story of Fiddler on the Roof is based originally on the Tevye the Dairyman vignettes by Sholem Aleichem.  The Yiddish translation, originally performed in Israel in 1965, was artfully crafted byShraga Friedman, a renown Israeli actor/director just one year after the Broadway debut of Fiddler on the Roof.    Friedman, a native Yiddish speaker, was born in Warsaw and was able to escape from a war-torn Europe, along with his family, who made their way to Tel Aviv in 1941. Well acquainted with the works of Aleichem, Friedman used his translation to infuse Fiddler with rich literary references to the original Yiddish stories.

One of the most celebrated musicals of all time, Fiddler on The Roof, features music by Jerry Bock, lyrics by Sheldon Harnick, and book by Joseph Stein, with original New York Stage Production directed and choreographed by Jerome Robbins.

The original Broadway production of the show, which opened in 1964, was the first musical theater production in history to surpass 3,000 performances; the show won the 1965 Tony Award® for Best Musical in addition to eight other Tony Awards that year; and has performed in every metropolitan city in the world from Paris to Beijing.

Suzanna BowlingMay 12, 2022
Read More
Scroll for more
Tap
The Mountains Look Different or Rather The Mountains Have Crumbled
Dropping Gumballs on Luke Wilson or Corporate Takeover