Fiddler on the Roof – The Tour

Fiddler on the Roof – The Tour

Needing a break from all things tinsel and holiday? Director Bartlett Sher and his team are at the helm of a sober retelling of a Broadway classic. Yes, Fiddler on the Roof is back in Chicago and packing the Cadillac Palace Theatre nightly during its limited run. This national tour is based on the 2015 Tony Award-nominated Broadway revival that riveted both fans and critics alike. Clocking in at nearly three hours and based on the stories of Sholom Aleichem, adapted into a book by Joseph Stein and a score by Jerry Bock and Sheldon Harnick, this musical is full of familiar show tunes with a pointedly political subtext torn directly from the nightly news. The modern eyes examining this classic tale sting both beautifully and profound, truly ending the year with another must see tour. 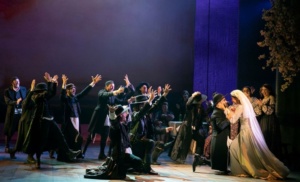 Set in revolutionary Russia in the early 1900’s in a small village called Anatevka, the action is set amongst a poor family, where the daughters’ forward thinking is at odds with deeply routed tradition. Briefly, the top of the play is set in present day with a man dressed in a red winter parka reading lines from an old text before he quickly transforms into Tevye (Yehezkel Lazarov) adorned in vintage prayer garb. Lazarov’s voice filled with such lush gravitas during his signature “If I Were a Rich Man” and adding a powerful shoulder shimmy to the chorus of the opening number “Tradition.” 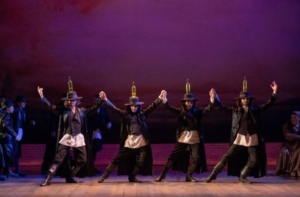 Bucking the old ways, his daughters, Tseitel (Mel Weyn), Hodel (Ruthy Froch) and Chava (Natalie Powers) engage in lovely harmonious, milking every giggle out of the classic “Matchmaker, Matchmaker,” and who can blame them? They want to marry for love, not station. As daughters of the village’s poor milkman, they have no “dowry” or “family background” and are rightfully fearful they will be stuck with a less than appealing mate. As the men in their lives, Motel (Jesse Weil) the meek tailor, provided plenty of laughs during his awkward outbursts. Lazar Wolf (Jonathan Von Mering) the significantly older town butcher, whose advances were  (thankfully) rebuffed by the younger daughter. Spirited Perchik (Ryne Nardecchia) an outspoken student and rebellious tutor with radical ideas, like men dancing in public with women, truly rattled the villagers to their collective cores, and of course caught the eye of one of Tevye’s young daughters. After all, who doesn’t like a bad boy? 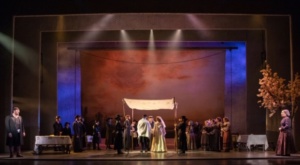 Beyond the daughters, the additional cast standouts are Maite Uzal as Tevye’s outspoken and domineering wife Goldie, the perfect blend of battle axe and comic foil, and of course, Yente (Carol Beaugard) the Matchmaker, played here squarely for scene stealing laughs. Whether kvetching about young people not knowing what is best for their futures, or stealing pieces of fresh fruit from her neighbors, this Yente could go straight to a reboot of the Fran Drescher comedy The Nanny and feel right at home.

The creative team also included powerful and dynamic choreography by Christopher Evans and Hofesh Shechter. The striking “bottle dance” in particular is a stunner as were the hauntingly familiar words to the wedding melody “Sunrise, Sunset.” For the tour, the rural village is explored more through set pieces than a traditional full set, all things minimalistic, designed here by Michael Yeargan, as well as being told through screens and scrims. Evocative moods punctuated with Donald Holder’s effective lighting. Catherine Zuber’s turn of the century costuming, all in heavy blacks, greys, browns and a similarly muted color pallet added in setting the tone of the downtrodden socioeconomic hardships facing most of the villagers daily lives.

New to this telling of Fiddler on the Roof, the blatant and in your face themes of forced displacement and change. As our current political regime continues to paint an ugly and subversive picture of refugees, this Fiddlerputs actual faces, names and backstories to a village full of forced migrants, in this case Jewish settlers, given just three days to vacate their homes by the oppressive Russians. The final act, a heart wrenching march of the entire cast, their prized possessions tied to small, carts. Women, children, families torn apart, a stunning and disturbing visual pulled straight off of the daily CNN feed or from a weekly pictorial from Time Magazine. What began as a war of words between the Jewish settlers and the Russians ended with the show’s haunting conclusion, impacting the viewer long after the final curtain dropped. 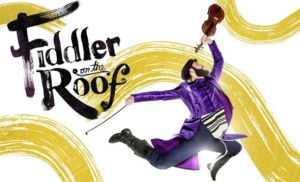 Fiddler on the Roof is playing at the Cadillac Palace Theatre now through January 6, 2019

RossOctober 21, 2021
Read More
Scroll for more
Tap
Top 20 Theatrical Moments of 2018 – On and Off Broadway, London, and Beyond
Ken Ludwig’s Twas the Night Before Christmas – Back For Seconds