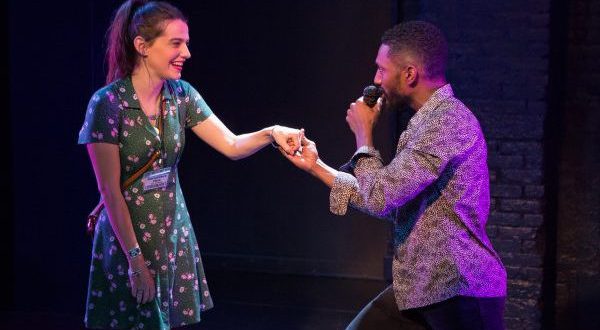 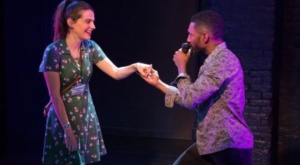 At The Flea Theatre it is the “Season of Womyn”—a series of works that focus on the stories of women. Steph Del Rosso’s Fill Fill Fill Fill Fill Fill Fill, asks what happens to ones identity after a bad break-up. For that matter do we ever even have an identity that is not related to the opposite sex? We watch as rock star Noah (Roland Lane) publicly breaks up with his girlfriend Joni (Sarah Chalfie) onstage in front of his legions of fans. Joni thinks he is going to propose, but  he explains he doesn’t want to be one of those guys who breaks up by text. He wants it to be special. Joni is devastated and imagines holes all over her body. Unsure of who she is without Noah, or for that matter any guy, she heads to a serious of shrinks and then a rebound. The first is a waiter named Todd (Ben Schrager), but she doesn’t know who she is, so how can this end well? 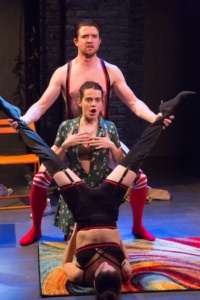 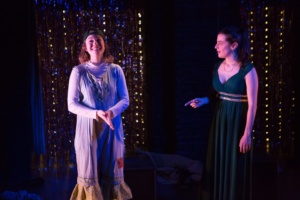 It isn’t until Joni connects with her younger self (Maggie McCaffery) that she realizes that she has shaped herself for men and not herself. 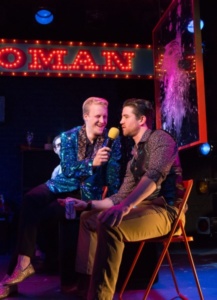 It is hard to connect with Fill Fill Fill Fill Fill Fill Fill, because we feel nothing for Sarah Chalfie as Joni. She is just too whiney and not lovable enough. We need a character that is really feeling this heartbreak, to comeback the series of caricatures. The cast for the most part is high energy and very talented, especially Roland Lane as the self obsessed rock star and Maggie McCaffery as the innocent Joni. 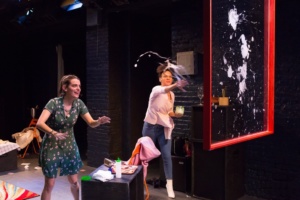 Marina McClure’s direction is manic. The set by You-Shin Chen and lighting by Reza Behjat is clever for the small space and the costumes by Kate Fry are winning.

Steph Del Rosso’s over-the-top comedy, never fills up the holes that are left when your life has been shaken to the core.