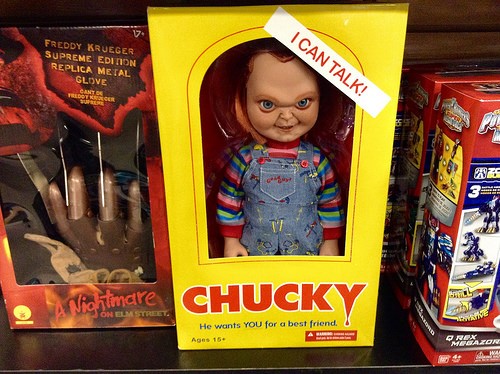 It’s just over a month until Halloween and that can only mean one thing… new scary movie releases! Fans of the iconic demonic doll Chucky are in for a treat next month as the Cult of Chucky comes to our screens from Universal Pictures Home Entertainment. 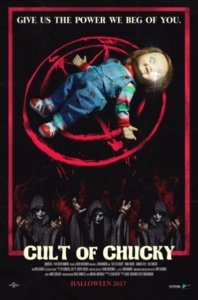 Series creator Don Mancini directs the seventh part of this long-running series involving this killer doll, who has been a Halloween staple for a number of decades now. It features returning cast members from the last six instalments, namely Fiona Dourif, Alex Vincent, Summer H. Howell and Jennifer Tilly.

The latter, plays the chilling character of Tiffany once again, almost 20 years since her first appearance in Bride of Chucky. Tiffany remains a hugely powerful character in this story, who will do anything in her power – as Chucky’s long-ago bride – to assist her darling demonic doll.

Jennifer Tilly, an Oscar nominee, is consistently one of our favourite facets of the Chucky series with her possessed soul characterising Chucky’s harrowing hold over the rest of the cast. Tilly is such a talented actress; it’s hard to believe that she’s 58 years old given her youthful looks, but she’s been in starring in movie roles since 1983! There is one very unusual thing about Jennifer in that she actually has a double life: when she isn’t on set shooting her next Hollywood movie she can be regularly found hustling on the poker tables. She’s no flash in the pan either, with 13 finishes in the money in World Series of Poker events. Her successes have been enough for her to be named in the ‘Queen of Hearts’ – the top 10 female poker players as named by one of the leading networks for online poker, 888poker.

Tilly is also married to another poker star, Phil Laak. The Irishman is a charismatic player on the World Series of Poker scene. Between them, the couple have raked in upwards of $4m in live tournament cashes alone.

Equally familiar as Tilly to Cult of Chucky is the voice of Brad Dourif, who continues with the voice of Chucky that he’s been performing with such distinction since the original screened in 1988. Cult of Chucky was written as a sequel rather than a remake, designed to tie up the various loose ends from the previous three movies in the series.

A horror movie with a twist (of humor)

What maintains the popularity of the recent movies of the Chucky series is Don Mancini’s clever use of tongue-in-cheek humor, not to mention a huge dose of comic book-style mayhem. Although it’s moderately scary, it doesn’t leave you hiding behind your fingers with every turn; it’s fun horror, if that film genre is at all possible!

Getting to grips with the plot

The core of the plotline of Cult of Chucky revolves around Nica Pierce, played by Fiona Dourif, who is sent away to an asylum having been declared criminally insane. Nica maintains that it was her, rather than Chucky, who killed her family members. Nica’s psychiatrist attempts to lighten the mood during his therapy sessions by bringing along a ‘Good Guy’ doll, complete with an innocent face akin to Chucky.

The doll’s presence within the asylum soon results in a number of surprising, grim murders, which makes Nica come to her senses and acknowledge that she’s not insane after all. In grave danger in the asylum, both Chucky and Tiffany attempt to work together to teach Nica a lesson once and for all.

Despite there being a variety of plot holes throughout the film, if you’re a fan of the Chucky series and you’re prepared to take the 91-minute movie at face value, then it’s certainly a decent way to ease you back into the Halloween festivities this year.