7/1: Minions: The Rise of Gru. A spin-off prequel to the 2015 movie Minions, Minions: The Rise of Gruis the fifth installment of the Despicable Me franchise. The ensemble voice cast of Minions:  Steve Carell  as the voice of Gru and Pierre Coffin will return as the voice of Kevin, Stuart, Bob, Otto, and other minions. Besides these leading cast members, the prequel will also have Taraji P. Henson, Michelle Yeoh, RZA, Jean-Claude Van Damme, Lucy Lawless, Dolph Lundgren, Danny Trejo, Russell Brand, Julie Andrews, and Alan Arkin in other major voice roles. 7/1: A Call to Spy – Netflix. Directed by Lydia Dean Pilcher, the movie is about Vera Atkins who served as a spy recruiter during World War 2 in Paris. 7/8: The Sea Beast– Netflix. Chris Williams directs featuring the voice of Karl Urban (The Boys) the movie sees a young girl stowed away in a ship that is known for hunting sea monsters. 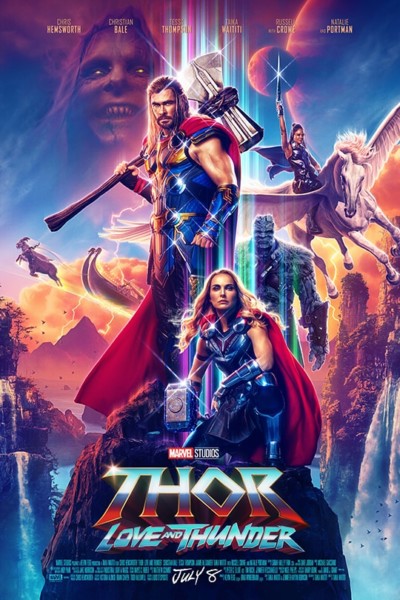 7/8: Thor: Love and Thunder Marvel Studios Thor (Chris Hemsworth) on a journey unlike anything he’s ever faced – a quest for inner peace. But Thor’s retirement is interrupted by a galactic killer known as Gorr the God Butcher (Christian Bale), who seeks the extinction of the gods. To combat the threat, Thor enlists the help of King Valkyrie (Tessa Thompson), Korg (Taika Waititi) and ex-girlfriend Jane Foster (Natalie Portman), who – to Thor’s surprise – inexplicably wields his magical hammer, Mjolnir, as the Mighty Thor. Together, they embark upon a harrowing cosmic adventure to uncover the mystery of the God Butcher’s vengeance and stop him before it’s too late. 7/15: Uncharted – Netflix. starring Tom Holland and Mark Wahlberg. Based on the video game of the same name from Naughty Dog, the movie sees Holland take up the role of Nathan Drake who goes on globe-trotting adventures looking for treasure. 7/15; Persuasion – Netflix. Another take on the classic Jane Austen novel. Dakota Johnson plays Anne Elliot who has been persuaded not to marry a dashing man of humble origins but will fate step in the way? 7/22: Nope Daniel Kaluuya and Keke Palmer are a brother and sister who run Hollywood’s only Black-owned horse ranch, has prompted plenty of speculation from cinephiles about its UFO plotlines. And while a new Jordan Peele movie will always be wrapped in mystery until the credits roll, the director has revealed a bit more info to tide fans over as they wait for the film to come out. 7/29: DC: League of Super Pets a brand-new 3-D computer animated feature film from Warner Bros. When Superman and the other members of the Justice League are kidnapped, who will save the superheroes?  The Man of Steel’s faithful canine companion Krypto isn’t going to sit around while his best friend is in trouble, so he goes on his own mission to find Superman with a little help from his new friends. Dwayne Johnson voices Krypto and Kevin Hart provides the voice of Ace. Rounding out the voice cast of the other Super-Pets are Diego Luna as Chip, Natasha Lyonne as Merton, Vanessa Bayeras PB and Kate McKinnon as Lulu. John Krasinski provides the voice of Superman and Keanu Reeves is Batman. Marc Maron  voices Lex Luthor and Dascha Polanco is Green Lantern.