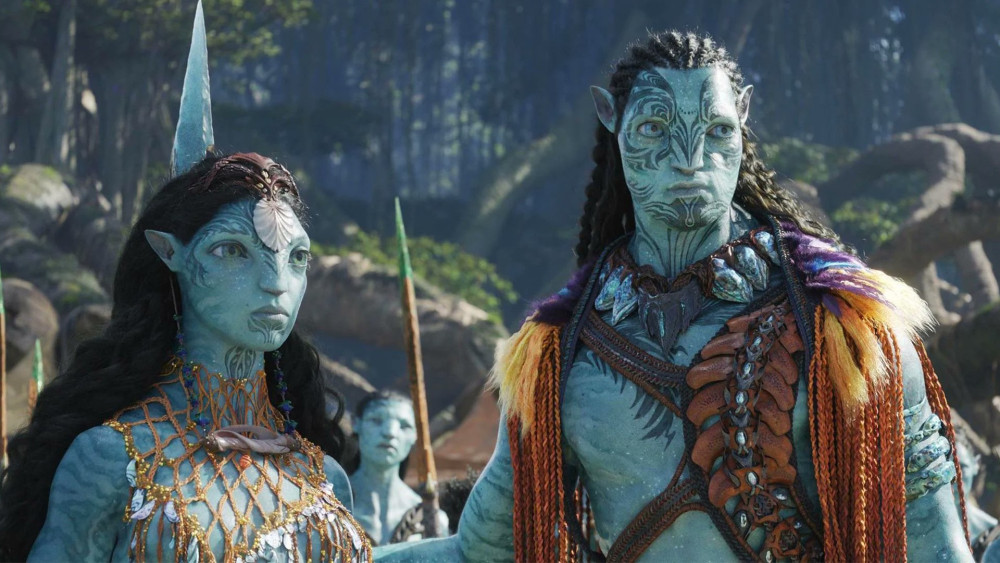 Its the holiday season and movies use to be released at a furious pace, with the best and the finest being release for the year. This year the highly anticipated James Cameron’s sequel to Avatar, The Whale, Whitney Houston biopic I Wanna Dance with Somebody and Damien Chazelle’s Babylon lead the pack.

12/1: The Harbinger. When her oldest friend is plagued by horrific nightmares from the beyond, Monique is forced to travel to NYC. On the first night of the visit, Monique learns the dreams are contagious as well as  the plague mask-wearing demon who not only feeds on its victims’ souls, but warps reality itself to remove any trace of their existence.

12/2: December 2 Christmas In The Caribbean. Left at the altar by her fiancé, Rachel (Elizabeth Hurley) takes her best friends on her honeymoon to the Caribbean, where she gets her groove on and finds love at the beach.

Emancipstion: Inspired by the gripping true story of a man who would do anything for his family—and for freedom. When Peter, an enslaved man, risks his life to escape and return to his family, he embarks on a perilous journey of love and endurance.

The Eternal Daughter. An artist and her elderly mother confront long-buried secrets when they return to a former family home, now a hotel haunted by its mysterious past. Featuring a towering, deeply moving performance by Tilda Swinton, acclaimed filmmaker Joanna Hogg’s beguiling latest film is a brilliant and captivating exploration of parental relationships and the things we leave behind.

Lady Chatterley’s Lover [Netflix]. Connie, born into wealth & privilege, finds herself married to a man she no longer loves. When she meets Oliver, the estate’s gamekeeper, their secret trysts lead her to a sexual awakening. She faces a decision: follow her heart or return to her husband and endure what society expects of her. Starring Emma Corrin & Jack O’Connell. Directed by Laure de Clermont-Tonnerre.

What Remains stars Anne Heche, Kellan Lutz, Cress Williams, Marcus Gladney Jr. and Stelio Savante Synopsis: Marshall Shepherd has spent five years living with the grief and loss of his wife, and the estrangement that has come from his son Samuel because he chose to forgive the man who killed her. But when Troy, the convict, returns to town, and Troy and Marshall begin an unlikely friendship, Samuel’s rage is put to the test, while the town Sheriff investigates a murder that may be related.

12/ 5: Broadway Rising. Directed by Emmy-nominated director Amy Rice (HBO’s By the People: The Election of Barack Obama, The Newsroom), the feature-length documentary chronicles the Broadway community’s harrowing and inspiring journey back to the stage following the COVID-19 shutdown on March 12, 2020.  Over 96,000 people lost their jobs when The Great White Way went dark decimating an entire ecosystem of businesses supporting the industry.  From actors to artisans, directors to doormen, producers to prop masters, not one aspect of the business was left untouched. But the show must go on!

12/9: Detective Knight: Redemption. Bruce Willis stars as Detective James Knight in this second film of the action-packed trilogy. In custody in New York, Knight finds himself in the middle of a jailbreak led by The Christmas Bomber, a brutal fanatic whose Santa Claus disciples are terrorizing the city. With the promised return of his badge in exchange for taking out the terrorists, the steely-eyed Knight doles out mercy for the just…and merciless justice for all the rest.

Empire of Light: Set in an English coastal town in the early 1980s, Empire of Light is a compelling and poignant drama about the power of human connection during turbulent times, from Academy Award® winning director Sam Mendes.

Matilda: The Musical (Netflix) An adaptation of the Tony and Olivier award-winning musical. Matilda tells the story of an extraordinary girl who, armed with a sharp mind and a vivid imagination, dares to take a stand to change her story with miraculous results.

The Whale. From Darren Aronofsky comes The Whale, the story of a reclusive English teacher who attempts to reconnect with his estranged teenage daughter. Starring Brendan Fraser and based on the acclaimed play by Samuel D. Hunter.

12/16: Avatar: The Way of Water. Set more than a decade after the events of the first film, “Avatar: The Way of Water” begins to tell the story of the Sully family (Jake, Neytiri, and their kids), the trouble that follows them, the lengths they go to keep each other safe, the battles they fight to stay alive, and the tragedies they endure. Directed by James Cameron and produced by Cameron and Jon Landau, the Lightstorm Entertainment Production stars Sam Worthington, Zoe Saldaña, Sigourney Weaver, Stephen Lang and Kate Winslet.

12/21: Puss in Boots: This holiday season, everyone’s favorite leche-loving, swashbuckling, fear-defying feline returns. For the first time in more than a decade, DreamWorks Animation presents a new adventure in the Shrek universe as daring outlaw Puss in Boots discovers that his passion for peril and disregard for safety have taken their toll. Puss has burned through eight of his nine lives, though he lost count along the way. Getting those lives back will send Puss in Boots on his grandest quest yet. Academy Award® nominee Antonio Banderas returns as the voice of the notorious PiB as he embarks on an epic journey into the Black Forest to find the mythical Wishing Star and restore his lost lives. But with only one life left, Puss will have to humble himself and ask for help from his former partner and nemesis: the captivating Kitty Softpaws (Oscar® nominee Salma Hayek Pinault). In their quest, Puss and Kitty will be aided—against their better judgment—by a ratty, chatty, relentlessly cheerful mutt, Perrito (Harvey Guillén, What We Do in the Shadows). Together, our trio of heroes will have to stay one step ahead of Goldi (Oscar® nominee Florence Pugh, Black Widow) and the Three Bears Crime Family, Jack Horner (Emmy winner John Mulaney, Big Mouth) and terrifying bounty hunter, the big, bad Wolf (Wagner Moura, Narcos). Puss in Boots: The Last Wish features an all-star comedic cast that includes Oscar® winner Olivia Colman, Ray Winstone (Black Widow), Samson Kayo (Sliced), Emmy nominee Anthony Mendez (Jane the Virgin) and Tony nominee Da’Vine Joy Randolph (Trolls World Tour).

12/23: I Wanna Dance With Somebody is a powerful and triumphant celebration of the incomparable Whitney Houston. Directed by Kasi Lemmons, written by Academy Award® nominee Anthony McCarten, produced by legendary music executive Clive Davis and starring BAFTA Award® winner Naomi Ackie, the film is a no-holds-barred portrait of the complex and multifaceted woman behind The Voice. From New Jersey choir girl to one of the best-selling and most awarded recording artists of all time, audiences are taken on an inspirational, poignant—and so emotional—journey through Houston’s trailblazing life and career, with show-stopping performances and a soundtrack of the icon’s most beloved hits as you’ve never heard them before. Don’t you wanna dance?

12/25: Babylon. From Damien Chazelle, Babylon is an original epic set in 1920s Los Angeles led by Brad Pitt, Margot Robbie and Diego Calva, with an ensemble cast including Jovan Adepo, Li Jun Li and Jean Smart. A tale of outsized ambition and outrageous excess, it traces the rise and fall of multiple characters during an era of unbridled decadence and depravity in early Hollywood.

12/30: White Noise. Adam Driver, Greta Gerwig, Don Cheadle, Raffey Cassidy Director: Noah Baumbach Synopsis: At once hilarious and horrifying, lyrical and absurd, ordinary and apocalyptic, White Noise dramatizes a contemporary American family’s attempts to deal with the mundane conflicts of everyday life while grappling with the universal mysteries of love, death, and the possibility of happiness in an uncertain world. Based on the book by Don DeLillo, written for the screen and directed by Noah Baumbach.