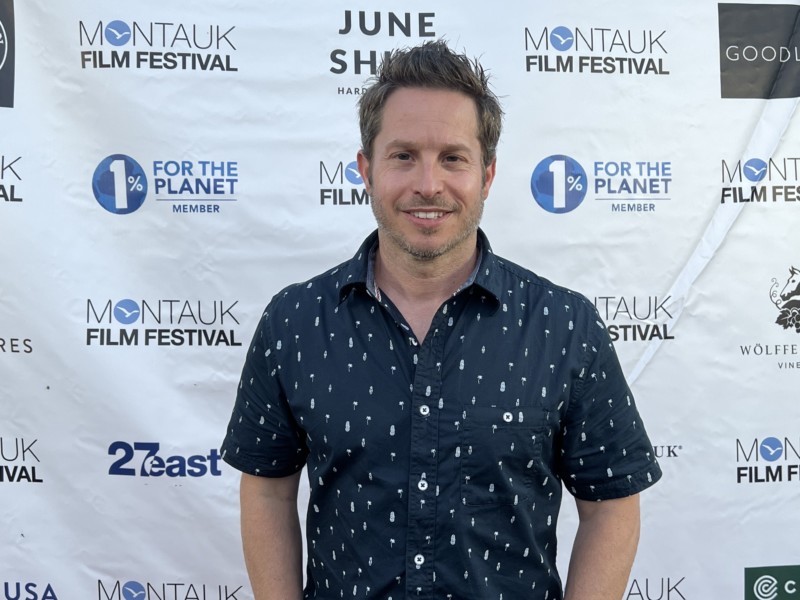 Suzanna Bowling
It was the second night of the Montauk Film Festival and I was looking forward to seeing the film “Finding Sandler”. The premise was catchy and was based on David Seth Cohen, the director, writer and actor’s life. The promos stated: “Years after a missed opportunity with his hero Adam Sandler, a determined filmmaker goes on a quest to recapture what could have been.” I did something I normally do not do, I interviewed Mr. Cohen before I saw the film.

The film takes place in the fall of 1998, Cohen, fresh out of college, sets out to pursue his dream of working in the film industry. He is awarded the role of production assistant in the costume department of the Adam Sandler film, Big Daddy. One night David is asked to drop off Adam’s suit for the premiere of The Waterboy to the front desk of Adam’s apartment building. The doorman sends David up to Adam’s apartment to deliver the suit and Adam who answers the door, invites David to come in and have a drink with him. David turns the opportunity due to being double parked and tasked to giving his colleague a ride home

Now almost 10 years later, David is 30 and living in his grandmother’s basement. One night, during a vivid dream, David finds himself traveling to California to try and find Adam. Driven by his dream, David knew he would never stop wondering “what if?” unless he did something about it.

Armed with a video camera, some money from his family and a few friends acting as crew, (turns out while researching there is also a Kickstarter page that he does not mention) David sets out to have that drink..

And here is where the film goes off track. David decides he wants Billy Joel to play piano as they have their drink, Emeril Lagasse to cook an appetizer, and Jon Stewart to host. He doesn’t have Sandler’s permission, yet he goes after these men first.

Trying to get one celebrity, let alone four to agree on a date and time is next to impossible. You have to go through their agents and managers, as well. How this director/writer/actor does not know this is inconceivable, considering someone who helped fund this film (a relative, who wishes not to be named) is in the business.

David goes to Sandler’s hometown, to his high school. The principle says no, but Cohen who does not know the word no, finds a way. This whole segment makes Cohen seem like a stalker.

He meets more people along the way, having them make comments on Adam Sandler having a drink with David.

Finally he gets in the room with Sandler, but that is not enough, no he wants the big to do, that he will never be able to pull off. He is not satisfied with “Finding Sandler,” but in using Sandler. This film should be named “Using Sandler, So I Can Have a Career.” He wants Sandler to see his film and Sandler refuses. For those who do not know Sandler has a film company. The film company that produced most of the Adam Sandler’s films is Happy Madison Productions, which is owned by Sandler. Also some of his films are by Touchstone Pictures.

We also find out the relative who does not want to be named decides this after he hears Adam Sandler’s manager asks him to cease and desist. The costume designer was also a relative, no longer wants to be in contact as well.

There are so many problems with what Mr. Cohen did, but the worse offense was that he used numerous film clips. He does not give credit at the end of his film, the copies he used I am sure are either press clips or academy clips, which is why the credit was on the film. When I asked him Mr Cohen about this, he told me his lawyer signed off on this. NO lawyer would sign off on anything. He told me it was fair use, but in reading this and talking to filmmakers, I don’t think it is. The fact that he is going to Adam Sandler’s school soon and is about to show it to people in his hometown, makes me say that is when the lawsuit will come down, because in a strange way this is stalking.
Cohen lawyered up and bought insurance, why…..you don’t need this unless what you have done is questionable.
Cohen originally had a trailer using the clips that he had to remove.

At the end of the film Cohen finds himself, but a what cost? That tale I sure is around the corner.