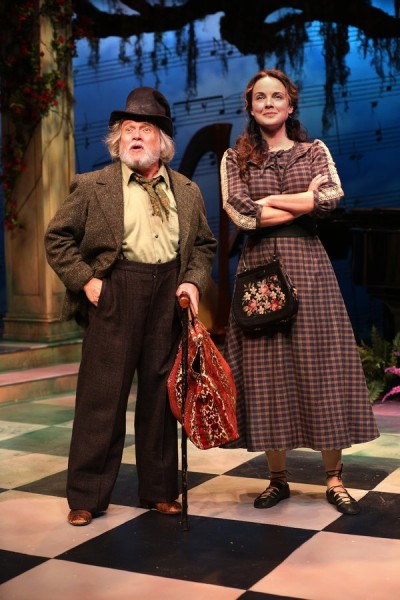 Finian’s Rainbow The Cure For What Ails You

Finian’s Rainbow The Cure For What Ails You 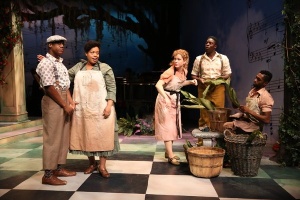 The Cast
Photo by Carol Rosegg 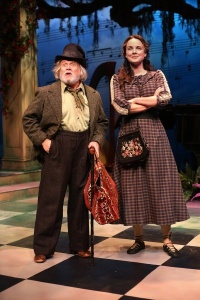 Finian’s Rainbow has a score and a message that is perfect for today’s wounded hearts. The revival at the Irish Rep will put some of that spring back into your step and give you hope. The show is so successful and well reviewed that the show has been extended until December 31st. With a book by  “Yip” Harburg and Fred Saidy, that normally stalls the show director Charlotte Moore has adapted the show for a hipper more music driven show, which is incandescently lyrical. The cast all posses gorgeous instruments especially Kimberly, Doreen Burns, which makes the Harburg and Burton Lane score soar. Standards like “How Are Things in Glocca Morra?,” “Old Devil Moon” and “Look to the Rainbow” all remind us of better days. 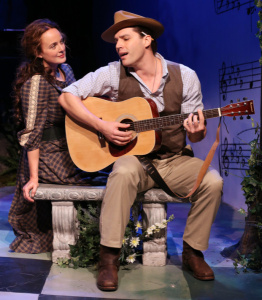 For those who know the show it is basically the same. Finian (Ken Jennings, the original Tobias in Sweeney Todd), has stolen a pot gold from the Leprechaun Og (Mark Evans), and has immigrated from Ireland to Rainbow Valley, Missitucky. Finian has dragged his daughter Sharron (Melissa Errico) with him believing that in burying the gold they will get rich. As soon as they arrive, Sharon helps Woody Mahoney (Ryan Silverman), the leader of the sharecroppers and the two fall for each other. In the meantime Og (Mark Evans), has followed them because without the gold, he is slowly turning human. When the bigoted Senator Rawkins (Dewey Caddell), shows up, his racism annoys Sharon and she wishes for him to be turned into an black man. The sharecroppers become corrupted by unforeseen wealth that turns the “idle poor” into the “idle rich.” 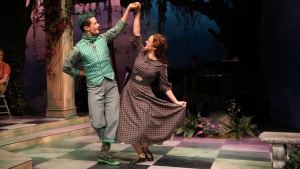 Ms. Errico is  a little too old to play Sharon, but she has chemistry with Mr. Silverman, so the romance works. Ms. Errico sounds wonderful and carries her acting chops into the musical material which makes everything she says and does seem real. It doesn’t hurt that her smile lights up the stage. Mr. Silverman is fair of face and well possessed of talent.  Mr. Evans brings out the humor and magic of  Og and Mr. Jennings fits just so as the title character. 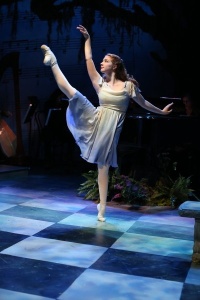 Musically directed by Geraldine Anello it was nice to hear this show unplugged and with just a harp, violin, cello and piano. Choreographer Barry McNabb’s  knows how house this space and his ballets for Lyrica Woodruff as Susan the Silent were lovely and lilting. James Morgan took what he does for The York Theatre and created a set that looks lush and inviting. I loved the wall paper usage of theof “Look to the Rainbow,”music.

The Irish Rep’s renovated 148-seat auditorium, is well done and if you haven’t visited now is the time. You will not be disappointed.

This is the perfect gift to give yourself or others as we heal.