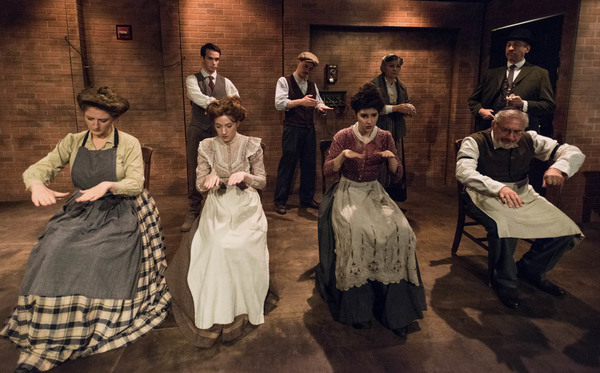 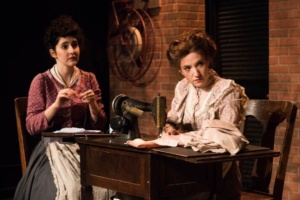 In 1979, I saw the TV movie of the week, “The Triangle Factory Fire”, and have been mesmerized by its story ever since. For those who do not know this piece of history, on March 25, 1911, a fire raged through the 8th to 10th floors of the Triangle Shirtwaist Factory. In less than 20 minutes, 146 people died, mostly teenage, female immigrants who were trapped inside because they were locked in. Many jumped to their deaths and it changed the labor laws, led to the International Ladies’ Garment Workers’ Union (ILGWU), and government legislation on fire codes and fire prevention in the workplace. This horrible tragedy is the inspiration for Debra Whitfield’s Fire, now getting its world premiere at the Chatillion Stage Company playing at Theatre 54 at Shetler Studio. 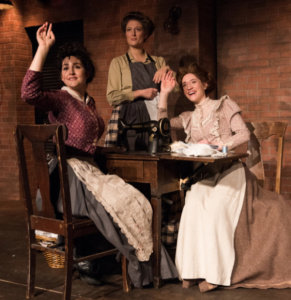 This fictional account is highly compelling as directed by Benjamin Viertel. Woven into this storyline is the dance of death shown by several different dance steps of the time. The factory girls are Rosa (the terrific Lauriel Friedman), a young Italian immigrant who understands how bad the conditions the girls work under and is trying to organize a union. She shows up for work despite having the flu as her family desperately needs her to support them. Anna (Malka Wallick), is a Russian-Jewish immigrant who is engaged to Nate (Jake Horowitz) but keeps putting off the wedding due to a secret that has her afraid to tell the truth. Last, but not least, is Maeve (Laura King Otazo), an Irish immigrant who works in the factory as a seamstress. She dreams of opening her own dress shop and saves as much money as she can weekly. She strikes up a friendship with Martin (Kevin Lowry), a German-Jewish immigrant, who works at the factory as a cutter, but studies to be a lawyer in the evenings. Marin’s father, Abraham (Stuart Zagnit), also works in the factory as a presser; in Germany, he was a respected tailor. He dreams of opening a shop in New York with his son. In charge of them all is Mr. Blanck (Jay Russell), the owner of the Triangle Waist Factory, who is cold, mean and out for himself. We follow their lives before the disaster and see the inhumane working conditions which lead to this tragedy. 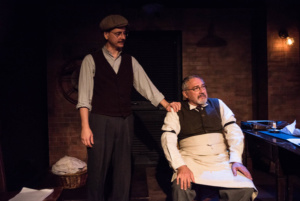 Interwoven into their stories is the court proceedings that include recorded testimony. Fashion commentary as if we are at a Fashion Week show for that era is also inter-spliced. Instead of a play that should move us to tears, everything seems disconnected and some of the factual evidence is wrong. The owners did not die in the fire. Anna’s secret makes no sense. Why she does what she does the day she gets engaged is seriously implausible, though what happens was prevalent. 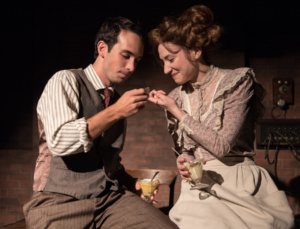 The actors take on multiple roles and are quite impressive, especially Lauriel Friedman and Stuart Zagnit. 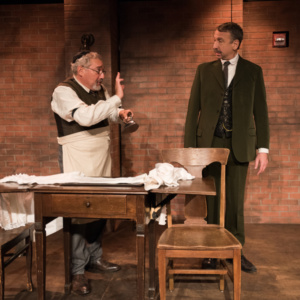 Stuart Zagnit, Jay RussellThe dialect coaching by Colleen Gleason keeps the multitude of accents clear and connected. The design elements for the most part truly help this production. Emily Chalmers costumes are perfect replications of the era, as were Inga Thrasher’s hair and make-up. Deborah Constantine’s lighting was subtly dramatic. Carlene Stober and Ed Matthew’s soundscape hauntingly set the tone. Bryce Cutler’s set and black-and-white projections are rather well done for the constraints of the space and budget. Debra Moolin’s props are also well done, however, the fire scene, though interesting, belays the time frame.

Fire and the Chatillion Stage Company have presented a viable work and I look forward to watching this company grow.