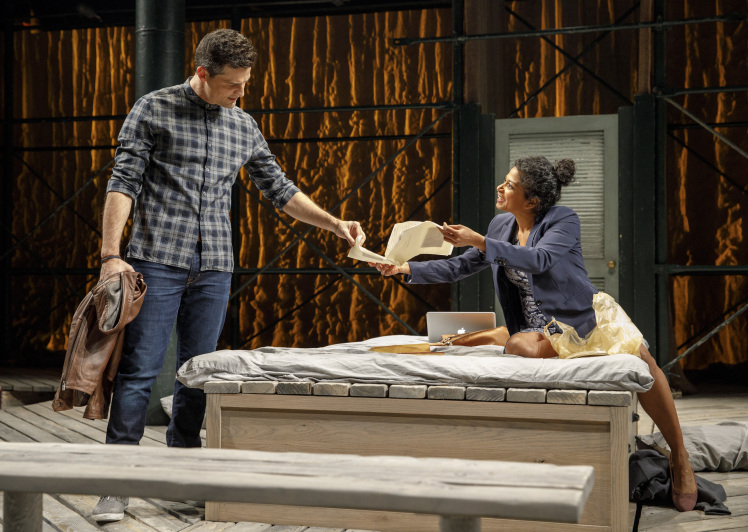 Fire in Dreamland Burns Bright at the Public

Fire in Dreamland Burns Bright at the Public

A woman cries, somewhere, possibly on a boardwalk by the beach, or so it seems, but for a reason we aren’t quite aware of yet.  Then, all of a sudden, there’s a snap, something like a bolt of thunder and lightning, arriving together, as if a storm is directly overhead. And in a way it is, in Rinne Groff’s (The Ruby Sunrise, Compulsion) new play, Fire In Dreamland, returning her once again to The Public Theater to tell a story about the impossibility of telling a story and the passion of those crazy souls who want to make art out of history. It’s a powerfully dynamic and funny new play directed with a detailed perfection by the specific Marissa Wolf (Kansas City Rep’s Man in Love) making her New York City debut. It begins with tears, but the thrill of this dual tiered story is not sad, but exhilarating, like an old fashioned wooden roller coaster. Exciting, clangy, and fast, this tale, that starts out with loss and disillusionment, finds its pathway through devastation into salvation, much like that heart-pounding feeling when we know we have survived the wild ride of a roller coaster ride, and we return to the safety of the platform edge.

Kate stands there, overwhelmed, breathless, and lost. She is played by the powerful lioness-herself, Rebecca Naomi Jones (ATC’s Describe the Night) in a magnificently constructed and nuanced performance that pulls us in before we even realize she’s done it.  Wrapped tightly in a trench coat against the cold Coney Island air on that beautifully constructed boardwalk, designed smartly by scenic and costume designer Susan Hilferty (RTC’s Love Love Love, Public’s The Gabriels), with strong precise lighting by Amith Chandrashaker (Ars Nova’s The Lucky Ones), and exacting sound design by Brendan Aanes (Ars Nova’s Cowboy Bob), she is slammed up against the charismatic European film maker by the name of Jaap, played seductively by the handsome Enver Gjokaj (Public’s As You Like It). He wipes away her mascara-infused tears and whispers a story that invigorates him obsessively into her ear about a 1911 fire that burned Coney Island’s Dreamland amusement park to the ground. He’s focused quite passionately on the animals within the circus big top, but it’s the humans before us that we are transfixed by. But it is the aftermath of Superstorm Sandy, that was Kate’s focus, but now Kate needs another sort of ride to bring meaning and excitement back into her disillusioned life. So before she can even see the seductive European hook that has caught her, she buys a ticket on Jaap’s passion project, and gives up all in order to climb on board with a newly found passion, roaring loudly like that fiery lion high up on top of the rollercoaster. The only thing she has to figure out, with the help of another star-struck soul by the name of Lance, played persuasively by Kyle Beltran (Vineyard’s The Amateurs), is to not go down in a ball of flames, destroying all who circle around the Fire in Dreamland.

This is a story where only a mermaid has the power to swim to safety and to lead the horses to dry land. Groff seamlessly weaves the devastation of both a 1911 fire and a Superstorm by the name of Sandy into a tale of passion and the creation of someone’s life project, where redemption and understanding awaits on the other side.  We are all enlivened by the electric Jaap, and how could one not be, by the way he views this complicated world. It’s hypnotic and invigorating, making us all want to ride that wild ride with him, even as we see how creaky his structure that drives him is.  We join quickly with the wonderfully complex Kate, and find compassion and understanding in Lance’s soul searching predicament, riding the wave to a more mature understanding of nature through wisdom and maturity.

Genevieve Rafter KeddyJune 22, 2022
Read More
Scroll for more
Tap
She Says: Fire In Dreamland Left Me Out In the Cold
Up Close and Personal With Be More Chill’s George Salazar