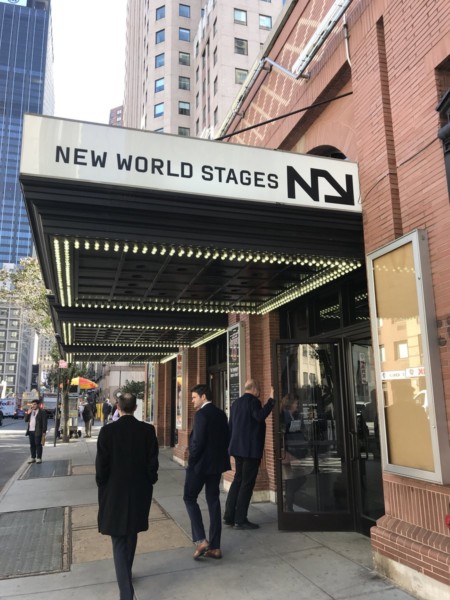 Darling Grenadine book, music and lyrics by Daniel Zaitchik, directed by Kristin Hanggi (Broadway: Rock of Ages, Tony Nomination) and musically directed by David Gardos (Assoc. Conducted: Falsettos, Finding Neverland) has already had a developmental reading at Goodspeed. The truly wonderful Adam Chanler-Berat (Broadway: Next to Normal, Peter and the Starcatcher, Amélie) and Emily Walton (Broadway: Peter and the Starcatcher, August: Osage County) made this sweet musical come to life.

Fall Springs, music and lyrics by Niko Tsakalakos, book and lyrics by Peter Sinn Nachtrieb was directed by Stephen Brackett (NY: The Lightning Thief: The Percy Jackson Musical, Buyer & Cellar),
with musical Direction by Emily Marshall (Nat’l Tours of A Chorus Line and We Will Rock You) had the comedically hilarious Will Roland (Broadway: Dear Evan Hansen). The new find was Alyse Alan Louis (Broadway: Amélie, A New Musical, Disaster!). This show about fracking and being swallowed into the ground is being helped by Ars Nova.

I give Klook’s Last Stand  book by Ché Walker, music by Omar Lyefook and Anoushka Lucas, lyrics by Ché Walker and Anoushka Lucas, directed by Jonathan McCrory (NY: HandsUp, Blacken the Bubble, Enter Your Sleep) and musically directed by Charles Duke a lot of credit. For a cast of only two Bre Jackson (Broadway: The Color Purple) and Kevyn Morrow(Broadway: Bandstand, Ragtime- Olivier Award nominee), Bre was sick and so Megan Cox stepped in to act the role and composer Anoushka Lucas sang the part. Poetic and soulful still came across.

NAMT’s annual Festival of New Musicals have included Come From Away, Thoroughly Modern Millie, Children of Eden, Honk!, The Drowsy Chaperone, It Shoulda Been You, Songs for a New World, I Love You Because, Striking 12, Vanities, Ordinary Days and many others, representing 460 writers.

NAMT’s Annual Festival of New Musicals is the cornerstone of NAMT’s mission to nurture the creation, development and production of new musicals. The Festival presents eight musicals in 45-minute presentations before an audience of over 600 industry professionals. In the short run, the Festival’s goal is to connect producers with writers, so that their shows can continue their development trajectory. The long-term goal is to expand the musical theatre repertoire, bringing new musical theatre to thousands of audience members around the world.