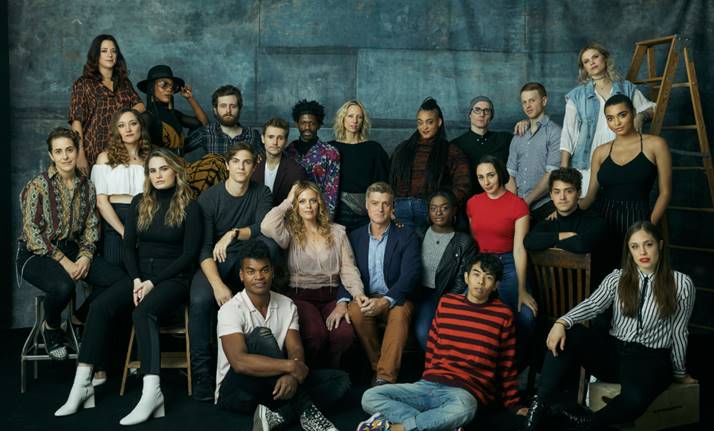 The Broadway musical Jagged Little Pill celebrates their moving day into the Broadhurst Theatre(235 W 44th St., NYC) on Broadway today, with the release of a first look at the full cast, captured by photographer Nathan Johnson.

“I raise a toast of gratitude to this extraordinary cast, for everyone’s unbelievable hard work, courage, and your fearlessness and commitment. You threw yourselves in!” said Tony Award-winning director Diane Paulus in a champagne toast to the cast in celebration of their move-in day on Broadway. “We’re on this journey together. You Live every moment of it, You Learn every moment of it…sound familiar?”

Jagged Little Pill  is an exhilarating new musical inspired by the themes and raw emotions laid bare in Alanis Morissette’s seminal album of the same name. The Healys appear to be a picture-perfect suburban family — but looks can be deceiving. When the cracks beneath the surface begin to show, they must choose between maintaining the status quo or facing harsh truths about themselves, their community, and the world around them.

Atlantic Records has partnered with Jagged Little Pill  for the release of the Original Broadway Cast Recording, adding the production to the label’s elite roster of Grammy Award-winning artists and cast albums.

The world premiere production of Jagged Little Pill  ran for 79 sold-out performances, from May 5–July 15, 2018, at American Repertory Theater in Cambridge, MA. The 10-week engagement marked the longest-running and highest-grossing production in the theater’s history. Variety declared the musical “Triumphant! Not since Rent has a musical invested so many bravura roles with so much individual life.” BuzzFeed described the show as “stirring, breathtaking and exceptionally relevant…work this ambitious broadens our perspective of what theater can do.” NPR declared, “Morissette’s anthems are now for the ages. Visually interpreted in Jagged Little Pill with an absorbing intimacy and ingenuity, they reach down to our deepest raw selves, regardless of who we are.”

Released on June 13, 1995, the tremendous success of Alanis Morissette’s album Jagged Little Pill skyrocketed her to become the bestselling international debut artist in history; a title she still holds, with the record’s sales reaching 33 million copies worldwide. Nearly 25 years after its release, Jagged Little Pill continues to be one of the Top 20 Best-Selling Albums of All Time. With nine eclectic and acclaimed albums released over the subsequent twenty years, Morissette’s music has garnered 7 Grammy Awards (with 14 nominations), a Golden Globe nomination, and total sales of over 60 million albums.

Tickets are on sale now, and can be purchased via Telecharge, or by visiting the Broadhurst Theatre Box Office at 235 W 44th St., NYC. Box office hours are Monday–Saturday 10am–8pm, Sunday 12pm–6pm. The regular performance schedule for Jagged Little Pill  is as follows: Tuesdays at 7pm, Wednesdays at 2pm & 7:30pm, Thursdays at 7pm, Fridays at 8pm, Saturdays at 2pm & 8pm and Sundays at 3pm. For performances November 5th through November 27th, Tuesday, Wednesday, and Thursday shows begin at 8pm. The performance on Sunday, November 3 is at 8pm. Schedule is subject to change.

Suzanna BowlingApril 10, 2021
Read More
Scroll for more
Tap
He Says: MCC’s The Wrong Man is on Fire Body and Soul
The Glorious Corner