Fish Men Where The Past Effects The Present in Chess

Fish Men Where The Past Effects The Present in Chess 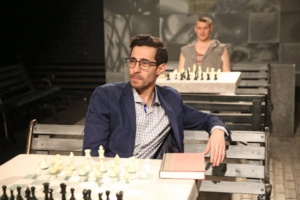 Cándido Tirado‘s Fish Men is getting a New York run at Intar. Set at the chess tables in Washington Square Park we not only watch the drama unfold but see spectacular chess games done at record speed. 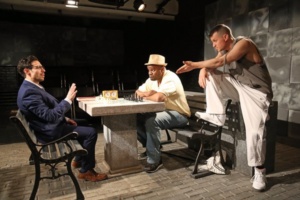 The staples at the park are two hustlers both desperate for dough. Cash (Shawn Randall) is the ultimate player, luring marks into bankable assets. He has 24 hours in which to raise $800.00 to buy his child a bike. The stakes are high because this item has been promised multiple times before and he stands at loosing his son. For John (Gardiner Comfort) his not too bright Russian sidekick the stakes are even higher as due to some gambling debts he stands to lose a hand. 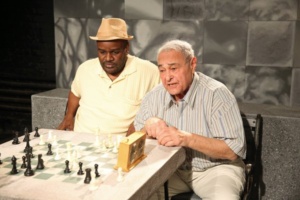 Also in the park are regulars Ninety-Two (Ed Setrakian), a chess prodigy who due to traumatic circumstances no longer plays. Jerome (David Anzuelo) is the only chess player who is there for the enjoyment of it all.

Enter Rey (José Joaquín Pérez), whose uncle the day before was taken. Ray has a score to settle and demons that are buried deep, which are on the verge of destroying him and anyone who comes in contact with him.

This show tackles a lot of issues including the Holocaust, the extermination of the American Indians, genocide in Guatemala and Black Lives Matter. Each character has it’s own point of contention.

Act One is a lot of exposition and should be cut or at least streamlined. Act Two has pay-offs but again less is more and would make more of a point. Many times just when you thought the play was over another issue came into play.

The cast is all superb with Mr. Setrakian and Mr. Pérez standing out.

Lou Moreno’s direction is fascinating to watch as the dialogue goes hand and hand with high-speed chess.

This play has a lot going for it but seriously needs some cutting. Tirado’s work, premiered at Chicago’s Goodman Theater (in collaboration with Teatro Vista).

Robert MassimiSeptember 13, 2021
Read More
Scroll for more
Tap
Chiflón, El Silencio del Carbón: The Silence is Devastating
She Says: Not All Of Us Are Everybody