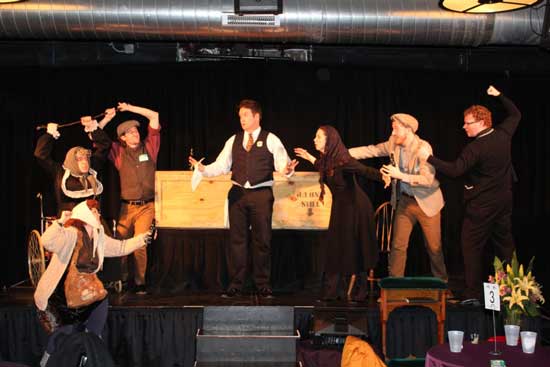 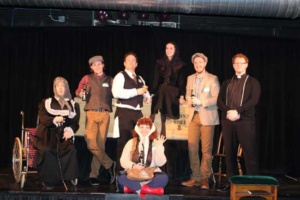 Sometimes too much can be a bad thing. The producers behind the hit comedy Tony n’ Tina’s Wedding have made a success out of an improvisation show set around an extended Italian family and their outrageous wedding reception. Hoping to continue mining that same dysfunctional family well, Chicago Theater Works decided to also bring back Flanagan’s Wake, a brogue heavy Irish themed wake advertised as a comedy.  Knowing most families come together to either jubilantly celebrate weddings or memorialize at funerals, I see where the producers thought they could tap another line to a similar well.  Sadly, this heavily stereotyped characterization never comes close to the levity reached in Tony and Tina’s naughty nuptials.  Of note, returning to this remounted production, original director Jack Bronis and musical director Bonnie Shadrake. What isn’t remarkable, this ten minute concept, inexplicably stretched out over two, much longer than necessary, acts was a laugh free, spirited mess best described as dead on arrival. Wishing it were significantly funnier than it actually is, there are not enough pints to make this show tolerable for the actual 90 minutes of its run. There is a full service bar in the venue, which would explain the need for an intermission. Casting the audience as a slew of “American cousins” the show hinges on the participation of this extended family.  The night I attended, regrettably, it crashed and burned. Slowly. 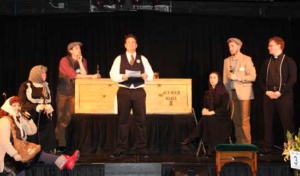 The cast here is made up of seven, wishing to be eccentric, characters coming together in the fictional town of Grapplin, County Sligo, Ireland to pay their less than respectful respects to a fallen brother. Fiona Finn (Luciana Bonifazi) the finance of the deceased, spent most of her time climbing on top of the coffin, placed center stage. The first time she did this was humorous, by the fifth, the joke was beyond played out. Father (Stephen Peebles) attempted to offer solace to grieving Mother Flanagan (Derek Brummet)  sharing pearls of wisdom like “be glad you’re not the dead one” and “death is a poor man’s doctor.” This second line only rang amusing as that does appear to be the strategy behind Trumpcare from the currently elected regime in Washington.  With the help of audience interaction, we discover how Fiona’s finance was killed, crushed by luggage, on the way to the airport with his brother Mickey (Alex DiVirgilio) behind the wheel of their speeding car.  There are some fleetingly clever sight gags, literally pulled from the purse of neighbor Kathleen (Susan Wingerter)  who was simultaneously hearing screaming banshees in her head, but by this point, your time would be better spent elsewhere.  Chicago has a long and lush history of real side splitting, successfully produced improvisational comedy, currently housed just a few blocks away at Second City.  If you are coming to the Windy City to play, you much bring your A game.  Everything here felt surprisingly and disappointingly below average.

The remainder of the show was a leftover pu pu platter of audience participation, including a group dance that rapidly fell flat, continuation of one note jokes delivering in pea soup thick, nearly indistinguishable brogue-heavy accents, and the obligatory reading of the will.  At the will reading, it was exposed everyone involved needed to make a claim on the dead man’s land, of course with suggestions yelled out from the audience.  There was even an audience member selected to sing her unique rendition of “Danny Boy.” Clearly not a trained singer, she had the full audience support behind her. She snared more applause and laughter than the choreographed shenanigans of all the preceding things Flanagan. If every stereotype wasn’t already thoroughly wrung out, a wee leprechaun makes a fleeting appearance at the end.  As hard as this cast worked to make something out of Flanagan’s Wake, this comedy is as stale as yesterday’s warm, flat beer.

The Year I Didn’t Go To School: A Homemade Circus- Highflying International Fun
TEDxBroadway Information On How Diversity, Connected With The World Around Us and Imagination